My mother thought I was joking. But years ago, as we sat in her car and the conversation turned to our favorite days of the year, I hardly cracked a smile when I gave her my earnest answer: the first day of spring, Christmas, and the opening day of the NFL draft. I’ve watched the draft for as long as I can remember, and as I stood in the absurdly long security line at Roosevelt University’s Auditorium Theatre yesterday, about to attend a draft for the first time, I briefly thought this moment would be more exciting than my first Super Bowl. Oh man, was I wrong.

From Rahm Emanuel on down, Chicago has treated snagging the draft from New York’s Radio City Music Hall as a coup, and the city definitely rolled out the red — excuse me, gold — carpet. This year’s festivities aren’t limited to the confines of Auditorium Theatre, an admittedly pleasant setting, albeit with some logistical hang-ups. Roosevelt University sits between Van Buren Street and Congress Parkway in the Loop, almost a straight shot across Michigan Avenue from Buckingham Fountain and Grant Park. Proximity feels like the only real reason for this location. The league is using Grant Park as a means to turn the draft into a sort of mini-festival, an unholy amalgam of Lollapalooza and a Play 60 commercial.

On the north side of “Draft Town” sits a massive concert stage and the Draft Tavern, a tent with a bar that stretches 50 yards and a huge screen blaring the NFL Network at dangerous levels. (Michael Irvin doesn’t need the help, guys.) On the other side, there’s the chance to go through just about every drill the combine has to offer. The line to run the 40 was at least 50 people deep. Between the tavern and the faux-combine, there’s another gigantic tent filled with every way the league could imagine for people to stand in line: a Super Bowl ring display, a Lombardi Trophy, a collection of no. 1 jerseys that you can pose with onstage. Any reason folks can have to pass the time with $7 cans of 312.

The strangest wrinkle, though, is this Selection Square business. After the security checkpoint is a slightly smaller version of the DJ tent from Coachella. A few lucky fans won a sweepstakes for seats, but its purpose is actually to house team personnel and host another huge screen on which to watch the draft. The Selection Square stage is where it all kicked off last night, with Goodell calling Chicago “Chi-Town” and opening the city’s first draft in 51 years. As soon as he walked to the mic, the boos began down the street inside the theater. It was a bizarre scene — everyone jeering someone who wasn’t even in the building — and the weirdness only continued from there.

There’s a chance that Tampa Bay was fielding offers for the first pick while on the clock, but considering the Bucs have had four months to plan, it didn’t seem like there’d be much drama about their selection. Then I realized that they actually had to wait out the clock — Goodell was still across the street. There wasn’t much drama when the pick did come in — the commissioner finally made it to the stage, again greeted by a chorus of boos. We knew Jameis Winston would be the pick, and we knew he wouldn’t be in attendance. It didn’t matter. This was a flat moment. At the Oscars, the presenter at least acknowledges when the winner isn’t there to accept, tamping down the awkwardness. There was none of that last night. “Party Rock Anthem” began to blare, and Goodell handed a jersey to a Bucs season-ticket holder.

It didn’t take long to recognize why the draft is such a perfect TV product and such an underwhelming live event. When Tennessee hit the clock, there was no talk of Chip Kelly or trade offers, just a combination of terrible pop music and on-the-nose regional anthems. When the Titans pick came in, something with “Welcome to Nashville” in the lyrics started playing, and that wasn’t close to the worst one all night. Way more teams have theme songs than you thought, and no one gets the crowd going like John Denver. 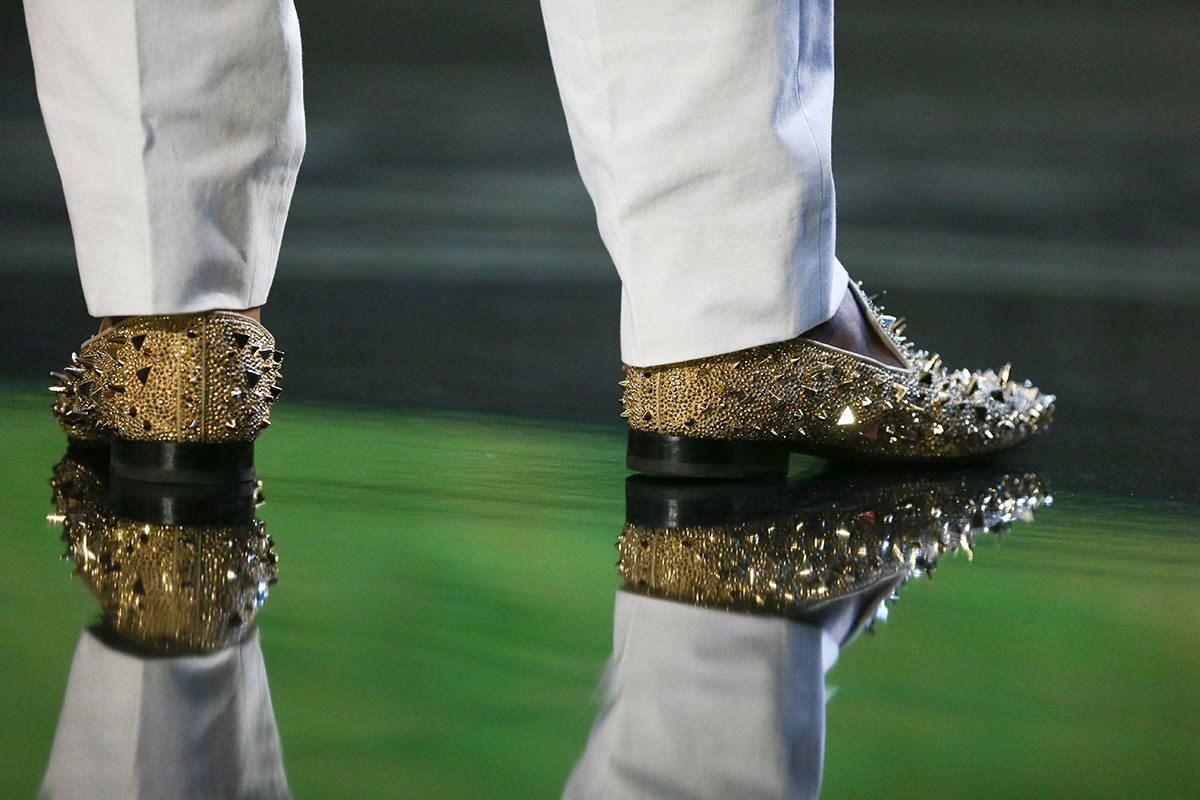 When Dante Fowler Jr. and his amazing shoes emerged from behind the curtain, it was almost a relief — a player, an actual player! Some of that excitement hung around through the seventh pick, when the Bears fans in attendance got loud about three different times before barely singing along with a version of our own fight song. The team’s pick, Kevin White, got a nice ovation. But that was the last moment like that all night.

The stretch between picks felt interminable, and there was no effort to stifle that feeling inside the building. On TV, analysis and highlights pass the time, but the only screens in the auditorium were relatively small — just above the stage — and muted. It didn’t help that there wasn’t much intrigue to go around. There was a stir when Todd Gurley went 10th overall, and another when San Diego went up to get Melvin Gordon. But without any trades in the first 14 picks, the first two hours were a slog. When I went to hit the bathroom about 90 minutes in, I saw Mayor Emanuel and Chicago native Jeff Garlin chatting in the lobby. They both seemed like they were heading for the exit. When the Broncos were on the clock after trading with the Lions, half the seats in the auditorium were empty.

As pointless as Selection Square is — and as cold as it was last night — it actually turned out to be a better setting to watch the draft unfold. Between picks, the NFL Network’s Scott Hanson and his iron bladder were joined onstage by Curtis Conway. They analyzed the picks, did some interviews, and generally kept things moving along. The league should take a hint and try a similar setup inside the actual draft. Some audio from the NFL Network, a two-man arrangement in the corner of the stage, or an actual live feed from one of the broadcasts would go a long way in giving the event some pacing and dramatic shape.

By the time Hanson and Conway were interviewing Trae Waynes and Gurley together onstage, most of the crowd had vanished. The Lions, Packers, and Cowboys — none of whom had picked yet — were best represented, and when Dallas took Connecticut cornerback Byron Jones, mostly to approving nods, a swath of people born in the late ’80s headed toward the exit. The lines had disappeared. ESPN’s open-air set had gone dark. The NFL Network’s set — hermetically sealed in a bubble to repel both the cold and drunk fans yelling “Hasselbeck, you suck” — was still lit and going strong.

Many of those who remained were packed in the Tavern, which was heated and still serving beer. Stragglers hung around after 10 p.m. At its core, this is what the NFL and Chicago were hoping the draft would be. Aside from a short glimpse of Goodell, there wasn’t much difference between watching in Grant Park and watching at home. But the appeal — even in a 40-degree chill — is drinking outside at an NFL-sponsored party.

A few Lions fans, crammed in at the table closest to the TV, smoked cigarettes and executed the Drinking-Since-5-p.m. wobble. Offensive lineman Laken Tomlinson’s selection in the first round by Detroit is maybe the draft’s best story. A Chicago product who played at Lane Tech after moving from Jamaica as a child, Tomlinson double-majored at Duke. Few guys in the draft are easier to root for. When Tomlinson’s name was announced, a guy in a Calvin Johnson jersey tossed his beer to the ground before heading toward the exit. A friend joined him, and I followed them out. There were grumblings about “another lineman,” and more dissatisfaction I couldn’t make out. I did hear one last exchange between them: They planned to come back tomorrow.