When Alfredo Angulo selected George Clinton’s “Atomic Dog” as his ring-entrance music Saturday night, he intended it as a declaration of the bombs he would detonate on Saul “Canelo” Alvarez’s chin while fighting with the canine tenacity implied by his “El Perro” nickname. Once the opening bell rang, Angulo’s musical selection became fitting in an entirely unintended way. He didn’t detonate bombs; he laid one. And he didn’t take care of business like a pit bull on the attack; he took care of business like a dog on a walk.

That’s one way to look at it, if you want to diminish the sterling demonstration put on by Alvarez. From the very start, Angulo was sluggishly shuffling forward, resembling not the assassin who nearly knocked James Kirkland out in Round 1 but rather the punched-out zombie who futilely awaited his second wind from Rounds 2 through 6. For the nine rounds and 47 seconds that it lasted, El Perro’s performance against Canelo was an atomic dog.

Or maybe Alvarez just made it look that way.

There’s a perpetual debate in boxing over how much credit to give the winner of a fight, particularly a one-sided fight that seemed to hold the promise of competitiveness going in. By definition, the winner is always fresh off a victory over a loser. Whomever the winner just beat is evidently beatable. This usually creates an opening to direct words like “overhyped” and “exposed” at the vanquished boxer, minimizing the value of the win. It’s not a problem you run into as much in other sports. The team that won the Super Bowl won the Super Bowl; there’s not much point criticizing their quality of opposition. Even when Rafael Nadal gets a little lucky and avoids Novak Djokovic and Roger Federer and beats the 15-seed in the Wimbledon finals, what matters is that he added another Wimbledon title to his résumé.

But in boxing, there are holes to be poked in every win. Buster Douglas fought the perfect fight against Mike Tyson. Yeah, but Tyson was overrated and we just didn’t know it yet. Bernard Hopkins was masterful in dismantling the undefeated, red-hot Felix Trinidad. Yeah, but Oscar De La Hoya created the blueprint. Floyd Mayweather pitched a shutout against Canelo Alvarez. Yeah, but Canelo was all hype anyway.

It was only six months ago that Canelo was on the wrong end of that one-way affair, raising accusations that he was “exposed” by Mayweather. The thinking went that Mayweather, the master matchmaker, had again picked the perfect foil at the perfect time.

But the counterpoint is that Mayweather, even in the back half of his thirties, is just that damn good. If you want to look at it with a minimum of cynicism, Alvarez showed against Angulo that he is himself one of the sport’s elite, which in turn elevates the ass-whipping Mayweather gave him.

The truth lies somewhere in between the extremes, of course. Mayweather picked him because he knew he could beat him, and Alvarez shouldn’t be in anyone’s pound-for-pound top 10. But he’s no chump either. Angulo was fresh off a performance against Erislandy Lara that stood out as his best showing in the last three years, so calling him “shot” for his very next fight would seem a reach. But the way Angulo made Alvarez look as fast as Mayweather is something we know to be an illusion.

Part of the idea behind this fight — Canelo’s return from the Mayweather humbling — was to find out what the boxing world really has in Alvarez, a 23-year-old ticket-seller for whom a three-pay-per-view year was planned, despite an 0-1 record as a PPV headliner. Some were so encouraged by Angulo’s near-victory against Lara that they were picking the upset. Most thought he’d at least test Canelo. He didn’t. We learned very little about the Jalisco heartthrob except that the Floyd fight didn’t break his spirit. Will Canelo be great? The answer is partly dependent on how much you credit Canelo for his return to the win column versus how much you blame Angulo.

Sadly, the ending of Saturday’s fight served to further cut into Canelo’s credit, though it shouldn’t. Alvarez froze Angulo with a vicious uppercut early in Round 10, and referee Tony Weeks jumped right in. The fans in attendance at the MGM Grand were largely unhappy, but it’s not uncommon that a charged-up live crowd doesn’t want the night of violence to be over. There were some among the Showtime broadcast crew who didn’t like the fight being waved off on the basis of a single blow. But judging by the reaction on Twitter, most viewers seemed to understand that this wasn’t really a one-punch stoppage. Angulo had absorbed nearly 28 minutes of nonstop punishment.

According to CompuBox, Alvarez landed 64 percent of his power punches and outlanded Angulo by nearly a 3-1 margin overall. Angulo had lost every round, except arguably the thrilling eighth. His punches lacked the sting to make a come-from-behind victory realistic. And the punch that precipitated the finish wasn’t the first of its kind: In Round 6, a left hand popped El Perro’s head up in similarly suspended animation, and he was fortunate that Canelo didn’t have combination-punching intentions, allowing Angulo’s head to settle back onto his shoulders before attacking again. Post-fight interrogator Jim Gray felt compelled to editorialize and declare the stoppage “a poor decision by Tony Weeks.” In the context of every punch leading up to the last one, however, there was nothing poor about Weeks’s decision. It was, in the phrasing of boxing writer Bryan Armen Graham, a “nontroversy,” and it was a shame that so much focus was taken away from the performances of the fighters.

That said, Angulo’s frustration over the stoppage was understandable. The window closes quickly for a face-first fighter, and a third TKO loss in five fights is devastating for the 31-year-old Angulo. The defeat — and the uninspired performance leading up to it — is especially disappointing because Angulo’s popularity was suddenly spiking. El Perro, once your run-of-the-mill knockout artist, had turned into a sympathetic hero. It began with the injustice of his eight months in an immigration detention center because of an expired visa, and the heartbreaking story of how it kept him from his then-5-year-old daughter Rebecca. It continued with the brave stands against Kirkland and Lara, the latter complete with E.T.-esque disfigurement. It crested with the ridiculously adorable footage of Angulo and Rebecca on Showtime’s All Access docs leading up to the Canelo fight.

Then there’s the evolution of Angulo’s hair, the importance of which can not be overstated in this Instagram and GIF world.

He started as just another fighter with an ill-advised mustache (and an even more ill-advised bedazzled dog collar): 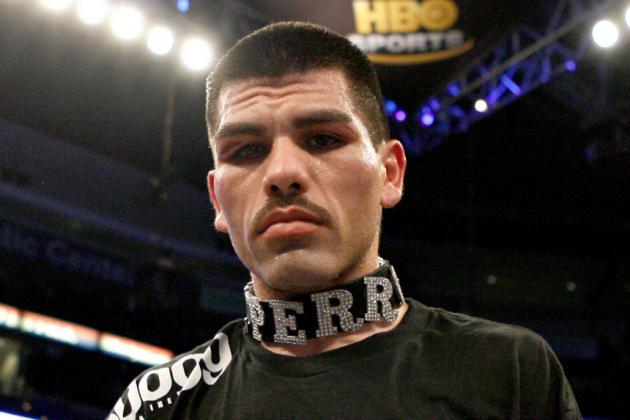 Then he came out of the detention center full Geico caveman:

Then he grew everything out and brought hipster glasses into the equation to create a look that could best be described as “smart chick with a beard”: And finally he got everyone on his side by cutting the hair off at a press conference and donating it to young cancer patients: It felt like stardom was beckoning for Angulo. But he’s too limited as a fighter — not only now, with the years and hardships catching up to him, but even in his prime. Canelo, as his backers hoped when they signed this fight, is simply on a different level. Whereas Angulo has lost nearly every time he’s stepped up, Alvarez has only lost once, and it was when he took the biggest step up that exists in boxing today.

With his win over Angulo, Alvarez provided some small amount of additional insight as to what his loss to Mayweather meant. Hopefully Canelo’s second fight of 2014 will help us understand how much his dominant win over Angulo is truly worth.