(Note: Tinder is an app in which people see photos of other people in close proximity, swipe to the right if they want to marry them, and then if there is a match, they get married, and then have sex.)

For an arena and a team long associated with apathy, iso-Joe/Josh, and empty seats, this appears to be one of what will surely be many attempts to get people into the stands. And not just to watch any team, but a team that has become very good at winning basketball games.

Some might say this is a tacky gimmick, turning the classy act of attending a game of roundball into a first cousin of nightclub radio promo. And to that, I say FINALLY.

It’s as if the Hawks finally realized they’re based in Atlanta.

The Tinder angle is even deeper than that — bigger than just getting people in the building. You have to go to the source of the idea to learn what this is really all about.

Last spring, preparing to jinx the Hawks yet again by writing about them as they started showing signs of promise, I spoke with Steve Koonin, the then-brand-new CEO of the Hawks (and Philips Arena).

Less than an hour before Game 3 of the Hawks-Pacers series, Koonin spoke of his grand, sometimes outlandish ideas for the Hawks and the fan base. After talking very broadly, since his new position had only been announced two weeks earlier, he said he had a few secret plans. And then he told me not to publish the next few things he had to say. He then gave me that serious dad look that alerted me he was serious. His first idea: bringing back the old Atlanta Hawks Pac-Man logo, which was unveiled only a week later, before Game 6 of that same series.

I was excited. So very excited. And then, as his son David walked over to join the conversation, the second idea came out.

My takeaway: cute, but it will never happen.

Nine months later, here we are. Now that it’s happening, I couldn’t be more proud. Stevie K had his first date with his wife at a Braves game, so of course he sees the beauty of Swipe Right Night. To Stevie K, this is the most natural way for love to blossom: at a sporting event. And Stevie K just wants others to have the same opportunity to woo as he did. 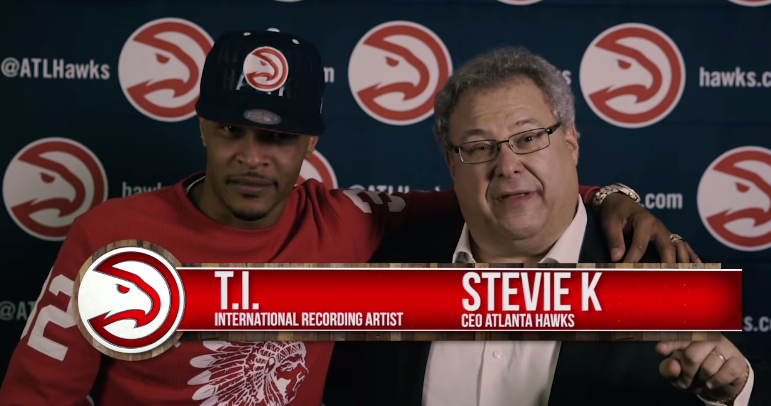 I wish everyone the best of luck tonight. The Hawks winning is a no-brainer, but I hope tonight is also a win for all the lovers out there in Atlanta. Make your way to Philips Arena with an open heart and an energetic thumb or index finger, depending on your technique. And then go find that love, like Stevie K would, in the historically hopeless, now palatial hardwood aphrodisiac that is Philips Arena.