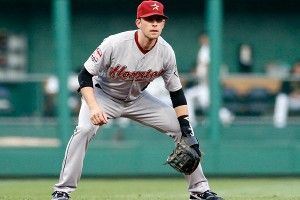 The A’s and Astros pulled off a five-player trade yesterday, one that strengthens Oakland’s status as a contender and upgrades Houston’s already vastly improved farm system.

For the A’s, it’s the latest roster upgrade in a subtle but aggressive offseason, one that’s seen the team make significant lineup upgrades without giving up anything indispensable. Lowrie, 28, came screaming out of the gate last season, hitting .297/.373/.547 one-third of the way through the schedule. Regression eventually took hold, knocking his season line down to a less impressive but still solidly-above-average-for-a-shortstop .244/.331/.438. The bigger concern, as it always is with Lowrie, was injuries. Normally you’d call 97 games played a disappointment for someone meant to be an everyday player — except in Lowrie’s case, that was actually a career high for games played.

Still, Oakland’s infield was much richer in quantity than quality before the trade: Jemile Weeks flunked out of the starting second base job last season, and Scott Sizemore’s credentials don’t suggest a big likely upgrade. Josh Donaldson showed occasional pop in his stab at regular third-base duty, but his .300 wOBA wasn’t exactly championship-worthy either. The A’s signed Hiroyuki Nakajima to a two-year deal in December with the intent of making him the everyday shortstop, but he’s an unknown commodity himself, coming over from Japan just after his 30th birthday. Early buzz suggests Nakajima will keep that job, with Lowrie playing the earlier-career Ben Zobrist role as a super-utilityman who’ll get lots of playing time. Odds are he’ll more or less seize an everyday gig himself before too long, where he could be a legitimate 20-home-run threat with some on-base skill if he can ever stay upright for a full season. That’s something none of the incumbent 2B-SS-3B candidates figured to provide.

Lowrie’s the third significant bat acquired by the A’s this offseason, a year after the team posted surprisingly potent offensive results: Oakland finished seventh in homers and seventh in Isolated Power last season, despite playing in one of baseball’s toughest parks for hitters. Lowrie joins Chris Young (acquired for banjo-hitting shortstop Cliff Pennington) and John Jaso (nabbed for pitching prospects A.J. Cole and Blake Treinen, plus a player to be named later) as likely improvements for this year’s offense. Oakland also acquired Rodriguez in the Lowrie deal to bolster the bullpen, but Rodriguez is a high-strikeout pitcher who gives up too many walks and too many deep fly balls, with a funky delivery that makes little use of his lower body and, per the excellent data-tracking service TrackMan, gets below-average extension on his pitches, thus making them appear slightly slower than their listed number (average fastball 94.7 mph; effective fastball velocity 94.5 mph). Basically, he’s a fungible throw-in.

The A’s are already stocked with strong, young, starting pitching, and a cheap but effective bullpen. Now they’ve upgraded their offense. The Angels did make upgrades this winter, but the Rangers look like a weaker team a week away from pitchers and catchers reporting. Oakland also figures to benefit from playing 19 games against an Astros team, newly shipped to the AL West, that’s a virtual lock to lose more games than anyone else. It’s hard not to bet on a pullback for a team that goes from 74 to 94 wins in the span of a single year. But thanks to a series of shrewd deals, as well as a more favorable schedule this season, Oakland’s expected regression might amount to a very soft landing — and another run at the postseason.

The Astros won’t have anything close to that kind of drama this year. Actually, after two straight seasons of setting franchise records for most losses (106 in 2011 and 107 in 2012), they’re a pretty strong bet to make it three in a row. If you’re an Astros fan, trips to the ballpark won’t be much fun this season.

But if you’re invested in the long-term health of the franchise, things are looking up. A sharp management team has engineered a teardown more dramatic than any this side of the last two Marlins owners or Charles O. Finley. But while most other strip-mine jobs of this scale were financially motivated, the Astros have something different in mind. By cashing in any and all available trade chips, and doing away with all pretense of semi-mediocrity, the Astros have amassed a collection of prospects and high draft picks that could form the foundation of a perennial winner — even if takes a few years for these moves to bear fruit.

ESPN’s prospects guru Keith Law released his list of the top 30 farm systems in baseball on Monday. Fortified by all those trades and high draft picks, the Astros checked in at no. 4 on the list. This isn’t all that remarkable by itself. Frankly, if Houston had a team that might lose 110 games this year and a lousy crop of prospects, you’d be forgiven for scanning the Oklahoma City RedHawks schedule for your next taste of respectable baseball. Except here’s the thing: That’s exactly where the Astros were a year ago. At that time, Houston’s farm system ranked a lowly 27th in MLB … after also ranking 27th in 2011, 28th in 2010, and dead last in 2009. The Astros’ previous owner, Drayton McLane, did try to stab at mediocrity, even as his team’s veteran core aged into irrelevance and the minor league system turned to dust. New owner Jim Crane, along with GM Jeff Luhnow and a fresh group of scouts and analytical minds (several of which come from noted baseball think tanks such as Baseball Prospectus), have turned the minor league talent pool around in a hurry.

This trade in itself isn’t necessarily going to produce a bunch of future All-Stars. Peacock, who’d been acquired by the A’s a year earlier in the Gio Gonzalez deal at the height of his prospect sheen, is now coming off a season in which he posted a 6.01 ERA at Triple-A Sacramento. Blame the Pacific Coast League, along with some bad luck on balls in play and with inherited runners. But save some of it, too, for Peacock walking a batter every other inning, giving up too many homers, even uncorking 14 wild pitches in 134⅔ innings. He’ll be given every chance to succeed in Houston, but the A’s had plenty of other options higher on their depth chart, and the Astros will need patience and hope if they’re to harness Peacock’s command and turn him into a viable major league starter. Meanwhile, Stassi has shown encouraging power as he’s climbed the minor league ladder, especially given how long it can take high-school catchers to master the twin tasks of handling a pitching staff in pro ball and hitting enough to be relevant. But he’s also had a Lowrie-like run of bad luck with injuries, has shown iffy plate discipline in striking out nearly three times as often as he’s walked in the minors, and needs to prove his power can translate to a circuit that’s less favorable for hitters than the California League.

The best-known name of the three is Carter, who’s something of a polarizing commodity. He’s shown big power throughout his pro career, with 39 homers at Single-A ball in 2008, 28 across two levels in 2009, 34 more in 2010, and another 28 in 2012, while splitting time between Triple-A and the big leagues. The question is, can Carter squeeze enough value out of his power and walks to make himself into a valuable everyday player in the majors? He strikes out a ton and was shielded from the league’s toughest right-handers last year, for the most part platooning with Brandon Moss at first base in 2012; give him 600 plate appearances and he might crank 30-plus homers … and also make a ton of outs. And that’s before we get to Carter’s defense and baserunning, both of which are net negatives.

The good news here is that Carter’s going to get every opportunity to play, in a park that should accentuate his skill set. Read Paul Sporer’s take on how Minute Maid park could bolster Carter’s production, then read Jason Collette’s piece on Carter’s progression as a hitter. If nothing else, buying Carter in fantasy this season is probably a smart idea.

Last offseason, the Astros parlayed a few Mark Melancon saves into a deal for Lowrie and pitcher Kyle Weiland. Now, the deal boils down to Melancon for Peacock, Stassi, Carter, and Weiland. Probably no superstars in the bunch. Still, it’s the kind of move you try to make every minute of every day if you’re a team like the Astros, trying to claw your way back from rock bottom.