Sometimes stories really do write themselves. Of course when Arsenal broke their nearly decadelong trophy drought against Hull City on Saturday, it would be in the most nerve-racking way possible. Naturally, Arsenal, one of the best teams in the Premier League at dispatching mediocre sides, would put themselves in a two-goal hole within 10 minutes. And, of course, over the next 100 minutes, everything that Arsenal are, good and bad, would be on display as they clawed their way back to one of the most cathartic Cup final victories in recent memory. This game was just so Arsenal. Let us count the ways.

2. A propensity for making shots count

Santi Cazorla’s set-piece goal, late in the first half, was Arsenal’s first shot on target. All season, Arsenal have taken significantly fewer shots than the other elite teams in the Premier League. That’s not good. But they somehow managed to scrape by. And while they certainly ratcheted up the pressure (and the shot count) in the second half, the first half was kind of typical Arsenal. It was sort of surprising that they were even in it. Despite being outshot, they managed to scrape a goal from one of their few opportunities and get back in the match. 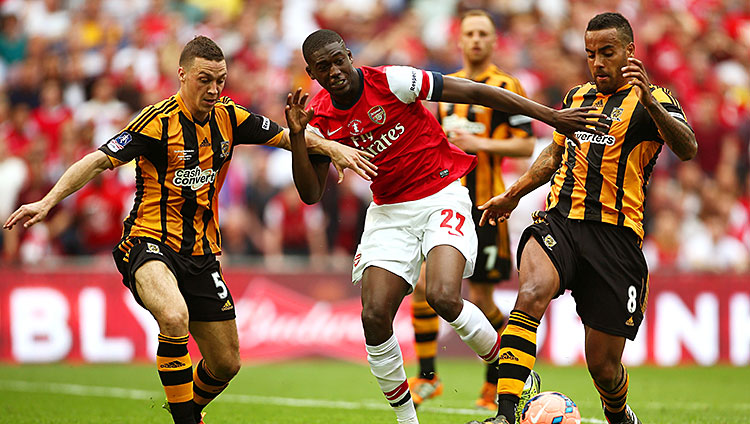 That was the reaction of Arsenal fans to both the 21-year-old French striker’s signing and to Arsene Wenger when he sent the untested and unimpressive Sanogo on for Lukas Podolski after an hour. Arsenal have nobody better to turn to than Yaya Sanogo? Really? And then, of course, he wins them the corner that leads to Laurent Koscielny’s tying goal.

For 105 minutes Wenger made exactly one substitution. As he has done for 17 years, he waited and trusted his system. As he has done game after game, season after season, transfer window after transfer window, he didn’t do something just for the sake of doing something. His patience and belief are admirable. It also almost cost Arsenal the FA Cup. Then, in the second half of extra time, he made a double substitution, sending Jack Wilshere and Tomas Rosicky on with fresh legs and new energy. Was the move decisive? No. Was it about as Arsene Wenger as Arsene Wenger gets? Absolutely.

He doesn’t really score all that well. For a big striker, his heading of the ball leaves something to be desired. His movement in the box really isn’t all that clever (unless you think running to the near post every single time is awesomely intelligent). The thing he does — the reason he plays so many minutes (other than the fact his backup is Sanogo) — is pass the ball to midfielders. It may not always be accurate, it may not always be the right decision, but if a midfielder is making a run, Giroud’s going to at least try to play a clever pass to get him the ball. Which brings us to …

Arsenal is Aaron Ramsey. When he’s on the field they are excellent; when he’s not they suffer. It’s as simple as that. Big goals, big defensive plays, runs at the right time, and clinical finishing. This year, Ramsey did it all. Could there really be any other player, any other way for the team to end its trophy drought? Of course not. As with everything else this season for Arsenal, it was Aaron Ramsey or bust.

Just when it all seemed wrapped up, Arsenal keeper Lukasz Fabianski came kamikaze-ing off his line to a ball he had no shot at getting, letting Hull substitute Sone Aluko skip around him for a free, albeit very difficult, shot on goal. Arsenal had it won and almost gave it away. That’s pretty Arsenal too (except for the almost part).

What more can you say? Arsenal have finally returned to the victor’s circle. More importantly, though, at least for Wenger, is that they did it his way. No compromise, no concession. For better or worse, Arsenal remain Arsene Wenger’s. This year, that was more than enough.