There was a time when an exhibition loss to the New York Red Bulls would be just another summer disappointment for Arsenal. After all, this was usually the season of despair for fans of the North London club.

In summers past, Arsenal’s best players would leave. Thierry Henry, Samir Nasri, Cesc Fàbregas, and Robin van Persie all fled to bigger clubs for better wages and better chances at silverware. The need for reinforcements would go ignored, with purse strings staying firmly knotted. Arsène Wenger would answer these defections by panic-buying on the cheap (André Santos, Park Chu-young) and trotting out injured players who (in the case of walking leg cast Abou Diaby) were momentarily returning to health, thus hailed as “like a new signing” when what was actually needed was … new signings.

To paper over the cracks in the roster, Wenger would turn to Arsenal’s academy. They were talented youngsters, no doubt, but expecting teenagers to make an immediate impact at the top level results in scorelines like Arsenal’s 8-2 mauling at Old Trafford in 2011.

Well, those days are gone. For the moment, anyway. I’m still getting used to this feeling.

The acquisition of Mesut Özil from Madrid on deadline day last summer was the first crack of sunlight in the gloom. Arsenal’s long-promised economic muscle — as debts from the construction of Emirates Stadium came under control and newer, more lucrative business partnerships came to the fore — is finally on display. Alexis Sánchez was signed from Barcelona in July after a wonderful World Cup with Chile, bolstering Arsenal’s paper-thin attacking options for a reported transfer fee of £26.4 million.

That was quickly followed by a reported £10 million splash for French and Newcastle right back Mathieu Debuchy. A deal for 19-year-old Southampton defender Calum Chambers seems imminent, and rumors of a move for Real Madrid midfielder Sami Khedira continue to swirl. 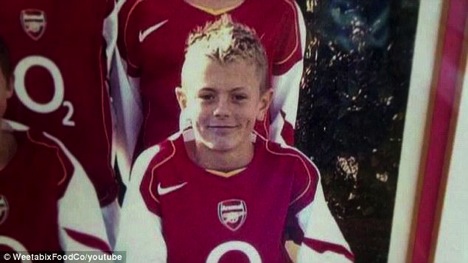 Still, there was something wonderful about watching youngsters come through the system — it gave fans a certain parental satisfaction watching them take their first steps with the club. After spending hours scouring the Internet for poorly shot youth team compilations, checking the Young Guns blog, and hanging on every stray bit of praise handed down by the boss, there was nothing better than when one of those homegrown, fully indoctrinated kids broke through to the big time.

The problem was it just didn’t happen that much. I’ve been as frustrated by Wenger and the board’s frugality and overreliance on youth as any Arsenal fan, yet whenever I play FIFA, the first thing I do is sell everyone over 28 and promote all the kids. Ryo Miyaichi forever.

Sure, there are still huge talents in the pipeline. Last week against Boreham Wood FC, Wenger unleashed the latest preseason Gunner teen sensation, 16-year-old winger Chris Willock. And, of course, there’s the 17-year-old German Ethiopian by way of Maryland, Gedion Zelalem. He was the breakout star — among both Arsenal supporters and hopeful U.S. soccer fans who go to bed dreaming of technical, creative, tactically aware midfielders — of the 2013 summer tour through southeast Asia, and he made his debut on U.S. soil against the Red Bulls on Saturday.

But now that Arsenal finally have the economic horsepower to compete for world-class players in the transfer market, it’s going to be less and less likely these kids make it to the senior team. So let’s take a moment to remember the young guns who, for one reason or another, never lived up to their prodigious hype.

Watt became the 85th player in the club’s history to score in his debut when he netted the first of Arsenal’s two goals in a victory over West Bromwich Albion in the third round of the 2009 League Cup (traditional proving ground of Young Gunners in the Wenger era) at just 18 years of age. “I like Sanchez Watt,” Wenger said. “He is a little bit of a street player. He makes fantastic runs, he is an aggressive striker and he always finds resources to be dangerous.” On loan since 2010 and limited by injuries, Watt netted eight goals in 46 appearances for lower league teams, moving to League One’s Colchester United on a free transfer in 2013.

Simpson’s footprint will forever mark the sidewalk of Arsenal history. In February 2007, at the age of 18, Simpson became the first player to score a hat trick at Emirates Stadium in Arsenal’s 3-2 win over Cardiff City in the FA Youth Cup, just seven months after the stadium opened. In November 2008, Simpson grabbed a brace in Arsenal’s 3-0 destruction of Wigan in the Carling Cup, leading to what has to be one of the most poorly chosen sports headlines ever.

Simpson was never able to break through to the first team and played last season in Thailand, where he made history once again as the highest-paid player in Thai Premier League history.

At Arsenal since the age of 13, Bentley was supposed to be the next David Beckham. His talent was never in doubt. His attitude, on the other hand … After five years with only one start for Arsenal, Bentley agitated for a permanent move to a club where he could play consistent first-team football. Frankly, he deserved that, just not at Arsenal, as the club was only two years removed from its Invincibles season and still had some dude named Dennis Bergkamp in the side. Wenger sold Bentley to Blackburn Rovers, a move derided as “perhaps the biggest clanger Arsene Wenger has dropped during his 12 years at Arsenal.” Bentley would later admit to being in the throes of a serious gambling addiction during this time.

From Blackburn, Bentley moved to Tottenham, where he elicited quotes such as these from then Spurs manager Harry Redknapp: “A lot of people also have completely the wrong idea of what he is like to deal with. I can tell you he is a decent lad. Sure he’s a good-looking young man and has talent in shedloads but he is not the flash Herbert some try to make him out to be.”

Bentley would end up clashing with old ’Arry over poor performances and poor life choices. He retired in June at only 29 years old, blaming social media for making the modern game “robotic.”

Wenger paid a fee of roughly £2 million for the 15-year-old Pennant in 1999, a massive amount for a trainee. In November 1999, at 16, Pennant became the youngest player to ever appear on Arsenal’s first team (a record now held by Jack Wilshere). By 2005, Pennant had been arrested twice and had spent 30 days in jail for alcohol-related driving offenses. Under questioning in March 2005 after crashing into a light pole, Pennant tried to pass himself off as Arsenal left back Ashley Cole. Pennant was allowed to sign for Birmingham City on a permanent basis a few weeks later, and he has the distinction of being the first Premier League player to take the pitch with an electronic tracking bracelet around his ankle. 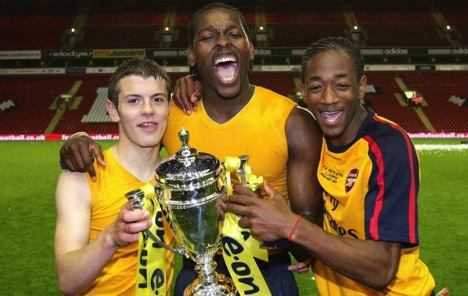 At the Arsenal Academy since the age of 8, Emmanuel-Thomas was the captain of the youth team by 16. In 2008, at age 18, he signed his first professional contract with the club. In 2009, he won the FA Youth Cup with Arsenal. Ahead of a Carling Cup tie in 2010, Wenger said, “Jay is knocking hard on my door, with two hands. He has outstanding quality and the potential to be a great player. One thing is for sure, he can score goals.” Powerfully built and confident with the ball at his feet, Emmanuel-Thomas had all the natural tools you want in a modern striker. Yet, it wasn’t to be. In search of first-team football, JET left for Ipswich Town in 2011 and he’s currently with Bristol City of League One. Of the players from Arsenal’s 2009 FA Youth Cup–winning squad, only Wilshere and Francis Coquelin remain with the club, with only Wilshere getting regular first-team football.