Arizona upset no. 2 Oregon on Thursday night, 31-24, turning the college football season on its ear. Here are three things you should really know:

Rich Rodriguez’s tenure at Michigan was such a demoralizing, high-profile debacle that it still tends to blot out everything else on his résumé, which otherwise paints a picture of a damn good football coach. People forget this about him, if they ever knew it. Nearly four years after he was run out of Ann Arbor, even Rodriguez’s triumphs continue to unfold in the context of that failure: The instant Twitter reaction to Arizona’s upset over Oregon could have been paraphrased as, “Wow, I bet Michigan wishes it still had RichRod!”1 You won’t find any columns from January 2011 suggesting Rodriguez’s boss at the time, athletic director Dave Brandon, was making a huge mistake in dropping the ax, but given where Rodriguez and Brandon respectively stand this morning, a little revisionist history is inevitable.

As always, I defer to Brady Quinn as the spokesman for virtual America.

But yeah, man, Rodriguez can coach. Before Michigan, he led his alma mater, West Virginia, to three consecutive top-10 finishes and a pair of BCS bowl wins from 2005 to 2007, the best three-year run in school history by far. The program he inherited at Arizona, in 2012, was starting over from scratch, having fired predecessor Mike Stoops six games into the previous season. Despite RichRod’s baggage, hiring him felt like a coup for Zona at the time, and the results are beginning to pan out accordingly.

The win on Thursday night was the Wildcats’ fourth over a ranked opponent in two and a half years under Rodriguez, their third over a top-10 opponent in that same time, and their second straight over the mighty Ducks. At 5-0, Arizona is one of two undefeated teams left in the Pac-12, along with UCLA, and will likely debut in the top 20 in next week’s polls2 ahead of another potential statement game against no. 16 USC.

Arizona has briefly appeared in the Top 25 a few times in the past decade, but hasn’t finished there since 1998.

This was only one game, but without warning, it just unlocked the door to a special season. 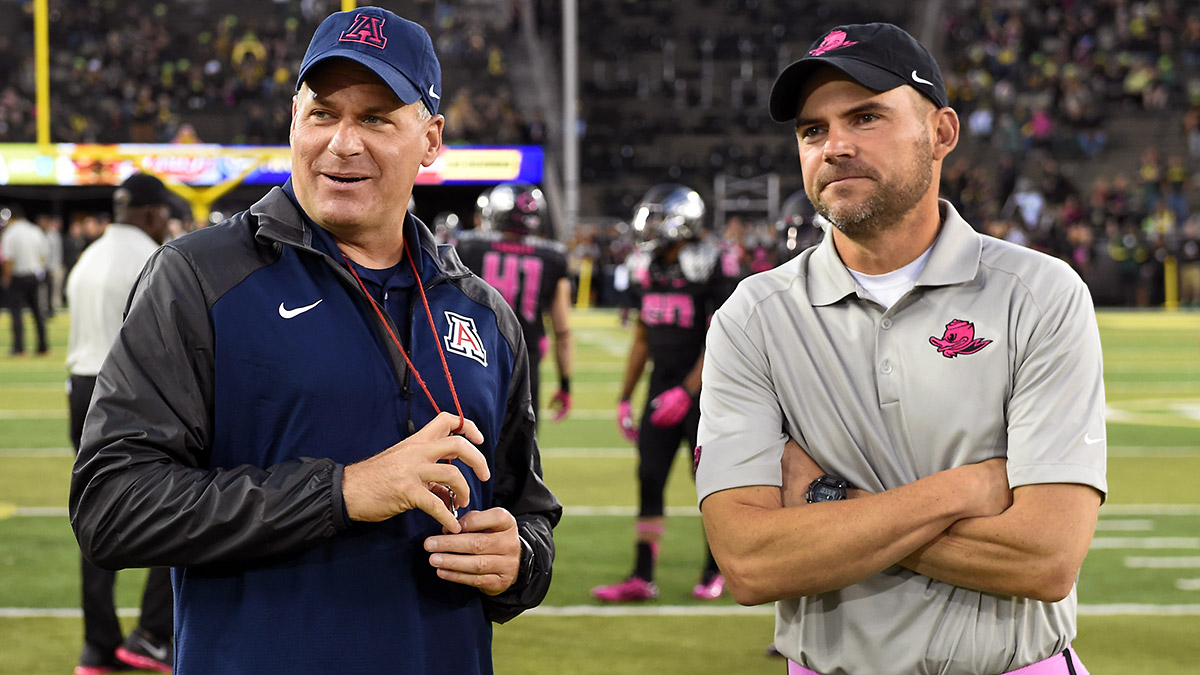 Although Vegas tabbed Oregon as a 23-point favorite entering Thursday night, deep down we all knew that the Ducks were living on borrowed time because of a decimated offensive line that caused all kinds of problems in last week’s come-from-behind, too-close-for-comfort win at Washington State. In that game, Übermensch quarterback Marcus Mariota was sacked seven times; against Arizona, he was dropped five times, including a pair of blindside hits that resulted in lost fumbles. Maybe all the gamblers had to be in bed last Saturday to make early church services or something, because anyone who actually watched Oregon’s escape from Wazzu would have seen the reckoning coming from a mile away — if not at the hands of the Wildcats, then soon enough.

At least in the Oregon offense’s case, a concentrated rash of injuries up front is a halfway-plausible excuse. The best the defense can do is point to a bogus taunting penalty against linebacker Tony Washington following a key third-down stop in the fourth quarter, which gave Arizona a new set of downs with which to score the go-ahead (and eventually winning) touchdown.

And fine, I’m willing to concede it was an uptight call at such a pivotal juncture in the game. Whatever. Sympathy is in short supply for a unit that yielded 495 total yards and extended touchdown drives on four of Arizona’s five full possessions after halftime.3 Before Thursday night, Oregon had yielded well more than 400 yards of total offense to its previous three opponents. Like the offensive line, the defense was already recognizable as an Achilles’ heel that was bound to flare up sooner or later. From that point of view, sooner is better: At least now there’s no denying the problem, and there’s still time to fix it.

3. Playoffs?! It’s Too Early to Talk About Playoffs!

The Wildcats’ final possession was an abbreviated exercise in clock killing.

On that note, here is my stance on playoff speculation at this stage of the season: It is way, way too early to be speculating about the playoffs. Based on the trajectory of a typical season in the BCS era, we shouldn’t expect any clarity in the national race until November, at which point we should begin bracing ourselves for multiple rounds of late-breaking upheaval down the stretch. Many teams have rebounded from regular-season losses over the years to work their way back into the championship discussion by year’s end, and that discussion is now twice as accommodating as it was when the question came down to no. 1 vs. no. 2. Oregon can still win the Pac-12, and with it a near-certain bid to the “Final Four.” 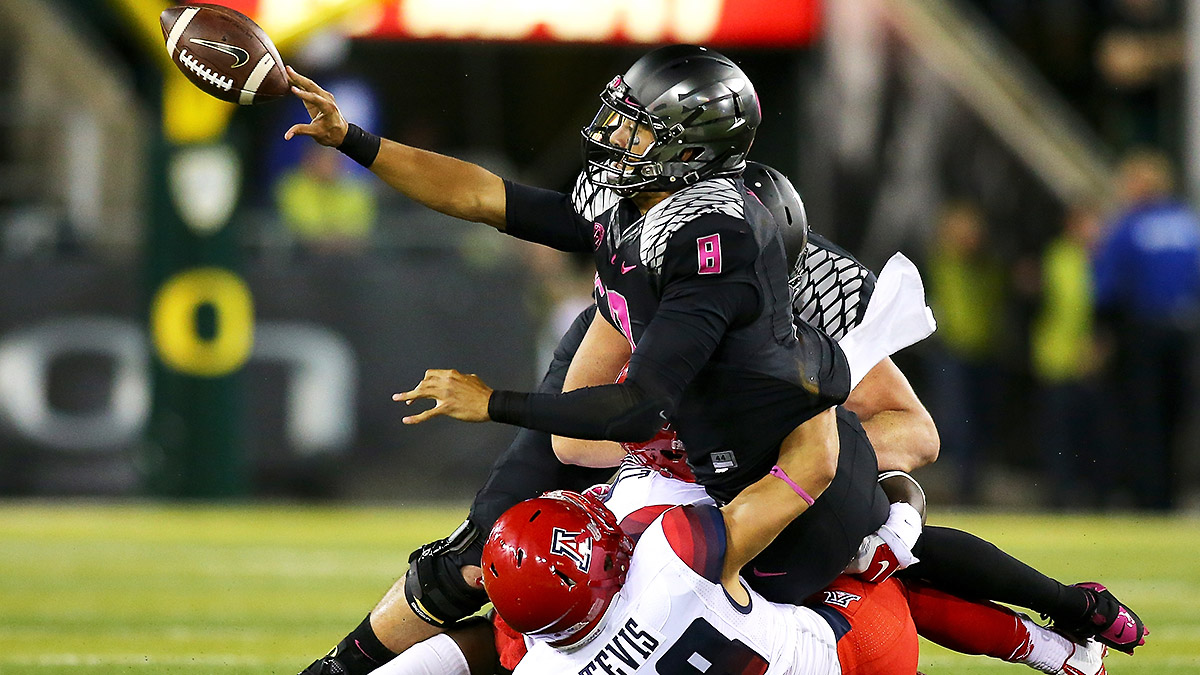 The only caveat in that pep talk is that the Ducks haven’t given any indication that they’re good enough to make that run. At full strength, maybe. Other than Mariota, though, what do they have to hang their hats on? The O-line is a mess, the once-dominant ground game struggles to run between the tackles, and the secondary is in dire straits against competent quarterbacks — not a good look for an outfit whose next game is at UCLA, with Washington and Stanford still to come.

The cracks are the same ones that first began to appear last November, when Oregon lost to Stanford and then Arizona. At the time, Oregon’s road loss against the Wildcats was its first defeat at the hands of an unranked opponent since 2009; Thursday’s loss was the first to an unranked team at Autzen Stadium since 2008. If second-year head coach Mark Helfrich is unable or unwilling to define himself as anything beyond the caretaker of Chip Kelly’s legacy in Eugene, he’s in danger of allowing the results to do so for him.