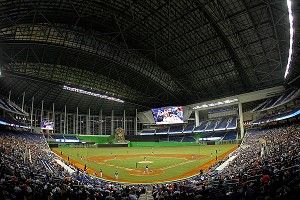 Average number of viewers for NBA games on TNT this year, its highest-rated, most-viewed NBA season ever: 2,498,000.

Average number of viewers for NBA games on ABC this year, its highest-rated, most-viewed NBA season ever: 5,421,000.

Average number of viewers for NBA games on NBA TV, its highest-rated, most-viewed NBA season ever: 337,000.

Average number of viewers of the first night of the NFL draft on ESPN: 6.66 million.

Average number of viewers of the first night of the NFL draft on ESPN and the NFL Network combined: 8.1 million.

Cost of the stadium itself: $515 million.

Amount the Marlins contributed to that: $120 million.

Percentage of Miami-Dade County voters who opted to oust Mayor Carlos Alvarez last year in a recall election partly because of the amount of public money used to build the new baseball stadium during a difficult economy: 88.

Number of protesters around the ballpark the day Guillen’s suspension was announced, according to ESPN’s Wright Thompson: fewer than 200.

Average attendance at Marlins games so far this year: 30,648.

Amount Penn State has paid “at least” 12 public relations firms in the wake of the Jerry Sandusky scandal: $7.6 million.

Number of national journalism awards, including a Pulitzer, won by crime reporter Sara Ganim of the Patriot-News of Harrisburg, Pa., for her coverage of the scandal: 5.

Years since a sports writer has won a Pulitzer: 12.

Number of those starters who decided to leave UK early to go to the NBA: 5.

Points averaged in those games: 9.2.

Games he’s played in the past month: 0.

Number of homers (as of Monday night) hit this season by Albert Pujols: 0.