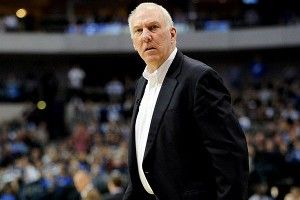 If you thumbed on ESPN last night to catch some of the nationally televised matchup between two of the NBA’s finest teams, you might have seen these formidable names simultaneously on the floor for the Spurs: Anderson, Bonner, Green, Neal and Splitter. Let’s see. Which Anderson is that? Kenny? Nick? Sparky? And Green. OK, is that the one with the bum ticker? No? Did he once play for Sacramento? Oh. I give up.

For those ill-equipped to win a stuffed armadillo during Spurs trivia night, we’re referring to James Anderson, a second year player out of Oklahoma State, and Daniel Green, a third-year man who was drafted 46th overall by Cleveland in 2009. Wednesday night, against Chicago, these relative unknowns combined for 16 points, nine rebounds, and almost 55 minutes of playing time. Those other three guys I mentioned — Bonner, Neal, and Splitter — each played over 20 minutes too. Somehow, a team featuring a gang of dudes who could go unrecognized in a San Antonio tiki bar is 24-11 and has the second-best record in the Western Conference.

Wednesday’s game between the Spurs and Bulls was reminiscent of those mud-wrestling bouts between San Antonio and Detroit in the 2004-05 Finals that scarred advocates of free-flowing basketball for life. In following seasons, the prospect of those two teams meeting again in the championship round was like living in a country being fought over by the Soviet Union and Germany. As Luftwaffe shells exploded outside, you spooned at your congealed bowl of borscht and hoped the Phoenix Suns would triumph.

Neither the Bulls nor the Spurs looked glamorous during Chicago’s 96-89 victory — a batch of ugly turnovers, a combined shooting percentage of about 43 percent — but these are among the small number of teams with a chance of winning a title this year. They’re not better than the Heat, but there’s always the possibility Dwyane Wade’s cyborg body will short-circuit during a dip in Star Island saltwater. What was most compelling about the Bulls-Spurs showdown was how two teams on opposite sides of the developmental arc are oddly similar.

The Bulls are, by public perception, a machine for catapulting Derrick Rose into the role of “Most Boring Star in All of Sports.” He’s a great player, an exciting athlete, and someone who maintains an ice-grill during All-Star Game introductions. It wasn’t that Rose should have krumped like LeBron or Dwight Howard, but his comment that a Nicki Minaj mega-mix preceding an exhibition game wasn’t the “time or place” speaks volumes about his flat-lined personality.

There are further parallels between the Bulls and Spurs. Carlos Boozer and Tim Duncan both average about 15 points and eight boards; each team has a white dude who hucks up 3-pointers (Kyle Korver/Matt Bonner); the two squads possess plentiful depth and combustible off-the-pine scorers like C.J. Watson and Gary Neal. Despite these similarities, most basketball fans believe the Bulls are a legitimate contender and the Spurs are just waiting to be put out of their misery.

For San Antonio, the regular season is an exhausting march over loose stones and frayed rope bridges. While other teams focus on proving their mettle, San Antonio plods along stoically, crowfeet-latticed eyes trained on the distant horizon. If this creaky army can reach the postseason in reasonable health, the belief is, their experience will trump youthful athleticism and vigor. The annual slog has often been painful. Ginobili has been particularly snakebitten: the Argentine legend has missed all but nine games this season due to a broken hand and a strained oblique muscle, suffered an elbow injury in the final game of last season and sat out 38 games in 2008-09.

Last season, the Spurs finished 61-21 and won the Southwest Division. In the first round, they were unceremoniously whupped by the Grizzlies, as Duncan and the rest of the frontline was overwhelmed by the combined beefiness of Marc Gasol and Zach Randolph. San Antonio was declared dead, at last. Again.

This season, with the grim perseverance of a zombie too stupid to sink peacefully into a grave, the Spurs have reanimated their carcass and staggered out to one of the best records in the league. The team’s sustained excellence has ensured no young lottery talent has bubbled up, so they’ve reloaded with foreigners, castaways, and overachievers. They get contributions from players like Tiago Splitter, who, despite his ridiculously cool name, looks like the fratty Aryan villain in a movie about nerds who get revenge on their tormentors. Richard Jefferson, regarded by most as an off-brand version of a washed-up Vince Carter, is shooting a career high in 3-point percentage and 3s made per game. DeJuan Blair, a second-round pick in 2009, slings his weight around in the starting lineup.

But the primary reason the Spurs are still an inexplicable force is coach Gregg Popovich. His impressive career record could be a testament to his team’s talent — the Spurs have never won fewer than 50 games in a regular-length season during his tenure — but a look at San Antonio’s statistical rankings shows his ability to win in a remarkable variety of ways.

The perception still lingers that the Spurs win with hard-nosed defense under Popovich, but for the last two years, they’ve been one of the best offensive teams in basketball. San Antonio is not a running team; they’re an efficient one. The Spurs are sixth in the NBA in offensive rating and 15th in defensive rating. Last year, they were ranked, respectively, second and 11th in those categories.

Popovich, more than anyone, understands the odds facing his well-worn team. Last week, while the Spurs were riding an 11-game winning streak, he started Blair, Green, Jefferson, Cory Joseph, and Kawhi Leonard on the road against Portland. After resting their starters, the Spurs went into Denver two days later and mashed the Nuggets by 15. Was it more disrespectful to Portland’s paying fans than non-locally sourced produce? Sure. But that’s why Popovich is the God.