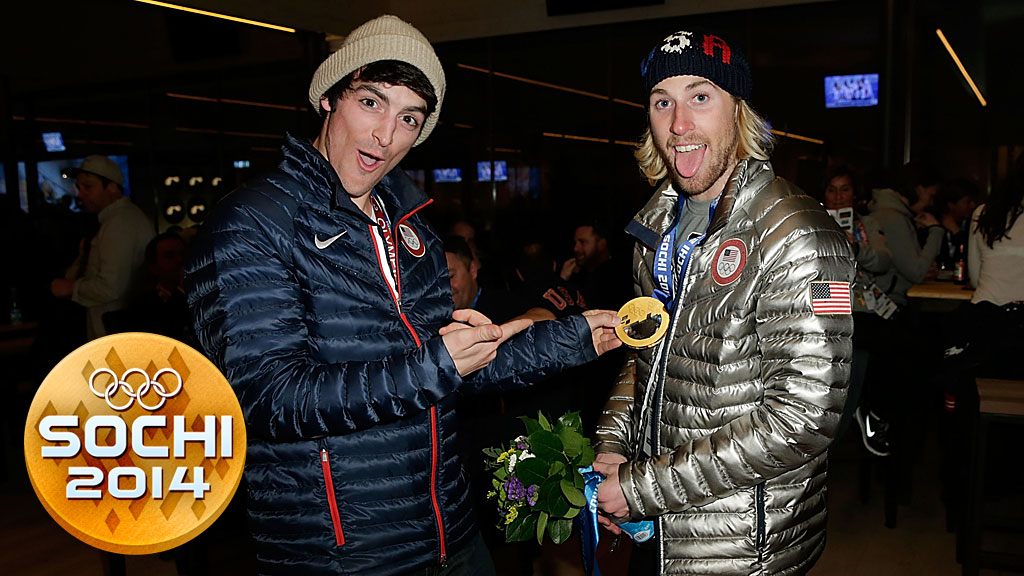 The lives of most Olympic athletes are built around rigid structure and discipline: They eat right, sleep right, and spend hours upon hours in weight rooms or on treadmills honing their bodies and their skills. And then there are the slopestylers.

This is the first year slopestyle is an Olympic event, and — even in comparison with other mountain sports — its athletes are unbelievably chill. Few other official gold-medal press conferences would begin with a prompt like “So how’s it feeeel man?” from a PR guy, but that’s how Sage Kotsenburg’s kicked off. The surprise winner told the crowd how he’d decided to throw a move that he’d never landed before … just a few minutes before the start of his final race. (He called his older brother, Blaze, to get his sign-off. “WHAAAAT?” Blaze said when he answered the phone.) Kotsenburg used the word “stoked” 14 times in one press conference and made life difficult for the poor folks tasked with translating his words into Russian.

The next day, when Jamie Anderson won gold in the women’s event, she was as hippie-chic as Kotsenburg had been dudely. She talked about her spiritual grandma and “soul-shredding” and growing up one of eight homeschooled, mountain-loving kids, and she used terms like “visualize” and “manifest” and “good vibes.”

My words can’t do justice to theirs, so here are some of the best statements from the two gold medalists.

“I grew up with Mark and Staale, I’ve known them for the past six years. We’ve all become really good friends. We’re not, like, enemies at all. We love each other. Oh, that’s probably not a good thing to say.”
— Sage Kotsenburg, who invited the silver and bronze medalists (Staale Sandbech and Mark McMorris) to stand atop the podium with him, flouting Russia’s anti-gay propaganda laws.

“I’ve never been to Russia or Sochi. Coming here and seeing the skies open up and this whole mountain range, it was so empowering. Of course, the first day, we went soul-shredding on the mountain. I couldn’t believe how much powder there was. I hadn’t gotten to free ride all winter. Just being able to have fun, and cruise, and just getting lost in the mountains felt sooo good.”
— Jamie Anderson, describing “soul-shredding”

“My parents and my brother and my sister didn’t come out. The main reason is they stress me out waaay too much and they get stressed out. At X Games my mom sits 500 feet away from the bottom behind a bridge watching so, she would not be good here. So I kinda was just like, ‘Hey, if you guys could just … hang out.’
— Kotsenburg, explaining why his family didn’t come to Sochi

“I don’t really know how to state it, I’m like, ‘my spirit grandma from Tahoe.’ … She was my neighbor in my condo and her husband passed away like 20 years ago and she never had any kids. We just kind of hang out, go for walks, have dinner. She’s from Bavaria — she spends summers in Tahoe and winters in Germany and she’s just been like, such a blessing in my life. She’s the sweetest, she’s in her mid-eighties, and she made it all the way out here and up to the course. … She was sooo precious.”
— Anderson, on her best friend and biggest fan (dibs on Bavarian Spirit Grandma for Halloween)

“It’s riding a piece of wood with plastic on it down a hill with rails and jumps. It’s like the randomest idea ever.”
— Kotsenburg, on the sport in which he just won Olympic gold

“I was just trying to calm down. I put on some meditation music, burned some sage, had the candles going. Just tried to do a little bit of yoga. Yoga always comes through for me … It was all about good vibration. Thankfully, I slept really good. I did some mantras. It worked out for me.”
— Anderson, on her routine before the race

“My mentality isn’t about, like, training or, like, you know, going to the gym … I wouldn’t be close to that thing.”
— Kotsenburg, on his training regime

“I was eating mad snacks, we got some chocolate, some onion rings, uh, chips and stuff. We were chilling hard.”
— Kotsenburg, on how he prepared the night before his race

“They didn’t even question it. They knew it was good vibes all the way.”
— Anderson, on how her various prayer beads and medicine bundles got through airport security

“That’s pretty awesome that someone did that! I’m stoked. [Silence.] The ooold Spicooooli.”
— Kotsenburg, after being told about this comparison

“That’s the challenge — trying to stay in the moment but trying to, like, visualize and manifest and see yourself where you want to be … [I’m] trying to use this to make a positive contribution to the world, and make a difference in one way or another — share some love, some light, and some gratification.”
— Jamie Anderson, being Jamie Anderson

“So I, uh, dropped in, and I did a cab 270 onto the first down rail, then followed up with a half-cab on, back-five off, on the second feature, and then a half-cab up, lay backside 180 off the cannon box, then a cab double cork 1260 Holy Crail from 10 off the toe with rocket air, then a back 1620 Japan.”
— Kotsenburg describing his routine and sounding like the coffee-ordering scene in L.A. Story.

“These are my mantra beads … My friend, my yoga teacher in Breckenridge, made them for me with sacred energy put into them.”
— Anderson, showing off one of her necklaces

“It was probably 10 minutes before … I keep my phone in the wax technician’s backpack so it was in there and I was like, ‘Hey, I’m gonna give a call to my brother.’ He was like, ‘Yeahh!! Get in there, man!'”
— Kotsenburg, on deciding to try a new move minutes before his race

“I love that. Sage has such a great spirit and I was so happy for him yesterday … he’s such a creative, fun person! I love the spoice! ‘Gratification for life …’ We’re all so blessed to travel the world together and snowboard. It’s our passion, we love it — just exploring new terrain, learning new parks.”
— Anderson, addressing the concept of “spoice”

“Whoa how random is this I made finals at the Olympics!!!”
— Kotsenburg on Twitter, shortly before winning gold