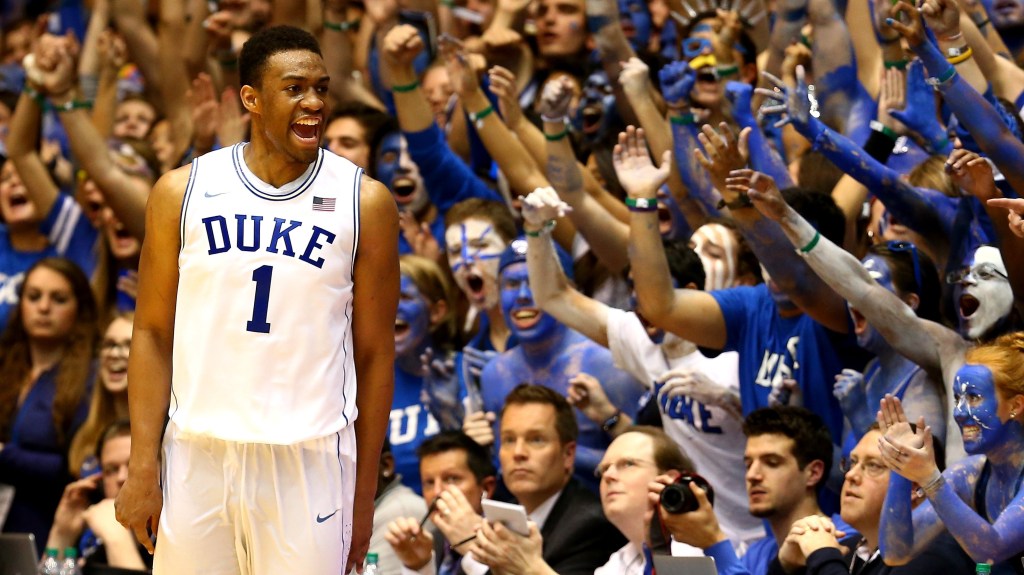 In case you were busy OH MY GOD TRUE DETECTIVE, here are the six biggest stories you missed in sports this weekend:

Jabari Parker’s 30 points led Duke to a 93-81 win over North Carolina, while Andrew Wiggins’s 42 were not enough to propel Kansas past West Virginia. The two performances from potential first overall picks sparked more debate over which tanking strategy is in play for the worst teams in the NBA: Riggin’ for Wiggins or Parker for Parker (in which teams convince Gregg Popovich not to rest Tony Parker against them, so they don’t accidentally grab an upset win over the San Antonio Spurs)?

Maryland went out with a bang in its final ACC regular-season game, as the Terrapins grabbed a 75-69 overtime win over the fifth-ranked Virginia Cavaliers. Soon though, everything will change in College Park. Maryland will be a member of the Big 10, and nothing will be the same. Parties all night, but serious schoolwork all day. Instead of trips to North Carolina, the Terrapins will be taking trips to Michigan. And sure, some lifelong friendships will be lost, but other new ones will be made. Man, going away to school is tough, and it’s gotta be even tougher for an entire school, but I bet with enough hard work and a few care packages from mom or Gary Williams, Maryland is gonna be all right. And hey, I bet there’s a certain 37-year-old point guard from Ohio State who will make everyone feel right at home!

Jodie Meeks put up 42 points as the Lakers somehow beat the Thunder despite a Kevin Durant triple-double, while LeBron James and the Heat dropped their third in a row to the resilient Chicago Bulls, 95-88 in overtime. “And everything is as it should be,” said nostalgic middle-aged NBA fan Spencer Gimble as he laced up his Chuck Taylors down at the Y. Gimble followed up his comments by asking the local YMCA activities coordinator what a damn volleyball net was doing on the basketball court, before taking his ball and going home.

In putting for dough:

With Tiger Woods fading on Sunday, Patrick Reed was able to hold off Bubba Watson and Jamie Donaldson to win at Doral at 4-under. Unfortunately, there is not much interesting to say about Reed. I mean, sure, he just became the youngest-ever golfer to win a WGC event, and yes, he now joins only Woods, Phil Mickelson, Rory McIlroy, and Sergio Garcia as players who have won three tour events before the age of 24, and OK, his pregnant wife is his regular caddy, but this week her little brother filled in for her. But come on! Without Phil and Tiger, where are the interesting stories in golf??

In FA Cup (not to be confused with League Cup, Community Shield, Champions League, or Premier League) action:

Manchester City fell to Wigan 2-1 in the FA Cup, marking the second straight year the Premier League behemoths have lost to the Latics in the cup competition. “I guess you’d say we’re ‘Latics-intolerant,’” said City midfielder James Milner with a wry smile after the match. After his comment was met with an awkward silence, Milner said, “You know, like ‘lactose-intolerant.’ Oh, come on, Shakespeare made rubbish puns all the time and everyone is on his knob. But when James Milner does it, nobody thinks to build a theater in London in his honor. What a ridiculous double standard.” Milner then became visibly queasy, and added, “Also, I totally forgot that I shouldn’t drink milk when I ate my breakfast this morning, so it’s been in my thoughts.”

Coaching legend Phil Jackson is reportedly considering a front-office role with the New York Knicks, who are riding a three-game win streak. The news was heard on WFAN radio by a father and his son in their apartment in Queens. The boy looked up at his father. The father looked down at his son. The boy’s mind was racing; he was filled with optimism. His first memory was looking at a picture of Jackson playing for the Knicks alongside Willis Reed while his father told him about determination. To have Jackson come home to the Knicks could change everything. Maybe Phil would lead them to a title, and then the boy’s mom would come back, and dad would be made full time at the plant, and they’d finally have the health insurance they’d need to treat his lazy lung. The boy wanted to say all of this to his father. To enjoy a brief moment of joyous optimism. But he knew better. So the father and the son said nothing, staring into each other’s eyes as Mike Francesca segued into talking about the batting order strategy for the Yankees.