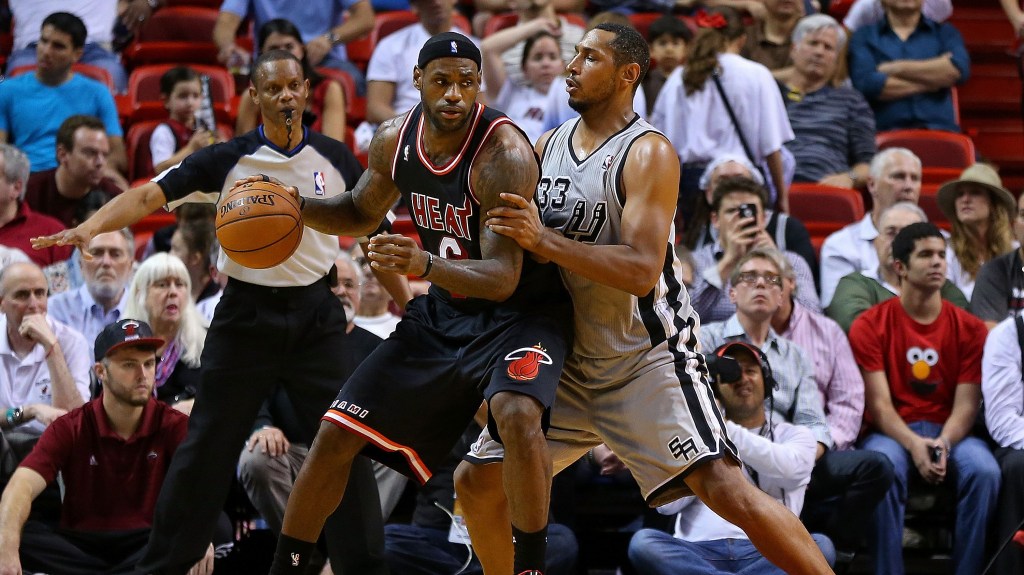 In case you were busy mistakenly assuming that you have Super Bowl fever when in fact you just had a regular fever, here’s what you missed in sports last weekend:

In advance of the big game, all week long we’ll be handing over About Last Night to the stars of Super Bowl XLVIII. Today: Seattle Seahawks quarterback Russell Wilson.

• Hey guys, Russell Wilson here. Wow, what a weekend of sports, right? Inspirational. I know it was for me. Nothing gets me more inspired for big games than other athletes showing what they can do. LeBron James, wow. What an athlete. But more than that, what a person. The guy did it all, and he did it with help from his teammates Chris Bosh and Greg Oden as the Miami Heat beat the San Antonio Spurs, 113-101. I mean, what can you say about LeBron at this point that hasn’t been said? Is he an inspiration? Definitely. Did everybody doubt him? Absolutely. Did he have to look himself in the mirror and ask himself why he couldn’t be the one to bring home the NBA championship? Of course. And then did he do it? Overcoming all the odds? Of course he did. I mean, I don’t know what’s more inspiring, LeBron James, or LeBron James’s mirror! No, that’s a joke. LeBron James is more inspiring, but only barely, because anyone can use a mirror to inspire themselves, so actually, I’m going to change my vote to the mirror. Man, that’s hard, though, to slight LeBron like that. But, like all things, this column is a championship opportunity, so I’m going to go with my gut and say LeBron’s mirror is the most inspiring thing.

• Let’s move on to Paul Pierce and Kevin Garnett. Wow, right? Those guys are legends, huh? And they returned to Boston for the first time as Nets and left with a victory (wow!) as Brooklyn beat the Celtics, 85-79. Now those are two athletes who are inspirations to me personally. Nobody ever told Kevin Garnett he could be a champion. Everyone always doubted Paul Pierce. But both of them had faith, and self-belief, and they asked themselves, “Why not us?” And I used to ask all the time, why not them? Why not Kevin Garnett and Paul Pierce? And they brought an NBA championship to the city of Boston, which has some of the absolute greatest fans in the world. What’s not to love about this story? Nothing. I cannot imagine a more inspiring story.

• Now let’s talk about Stanislas Wawrinka’s big Australian Open win over an injured Rafael Nadal. What a match, am I right? I mean, on one side, you have the young guy, Stan, gunning for his first big title. What a personal inspiration that is for me. Nobody told Stan he was going to win a title. He had to look in the mirror and make it happen, saying, “Why isn’t today my day?” Man, so inspiring. But on the other side you have Rafael Nadal. Fighting through adversity. One of the all-time greats. I mean, honestly, if you asked me which of these guys inspires me more in my life, I would have to say both of them.

• Everyone knows that if I wasn’t a football player, I’d play baseball. But people may not know that I also like to watch college basketball. And man, was there a better game than Michigan’s 80-75 win over Michigan State on Saturday? What an inspiring effort by both teams. I always say the separation is in the preparation, so I have to respect Michigan State coach Tom Izzo, who prepares his guys so well day in and day out. Not just on the court, but in becoming leaders in their communities. But then on Michigan you have Nik Stauskas, and nobody prepares harder than him. He takes more practice shots than anyone. So, because both teams were so well prepared, you couldn’t separate them by their preparation! They had to play the game! And they did! The whole game! What a blessing! Could anything be more inspiring than two teams of basketball players playing basketball for an entire basketball game?

• Can we talk about the New York Knicks’ 110-103 win over the Los Angeles Lakers for a second? I’m so inspired by this win that I’m physically ill. I mean, does anybody deserve it more and work harder than J.R. Smith? Here’s a guy who no one believed in. Literally. He surrounded himself with mirrors. Literally. And every day he asked himself, “Am I going to be the best J.R. Smith possible today?” And every day he did it. Literally. I mean, I ran into him once when I was volunteering at Seattle Children’s Hospital. He was being escorted out of the place by a whole array of nurses and security personnel after some sort of inspirational mixup. And, as he was running toward an exit wearing nothing but a child’s hospital gown, I asked him, “J.R., how do you be you so well, and what advice would you give me on my path to being the best Russell Wilson I can be?” And you know what he told me? Nothing, because my question slowed him down, and a really sweet security guard named Mike threw him to the ground. And I took that answer of “nothing,” and I let it inspire me every day. I don’t have to try to do anything to be me, just like J.R. doesn’t have to try to do anything to be him. I’d say J.R. Smith would be my no. 1 biggest inspiration, if that wouldn’t make me vain because we’re so profoundly similar as people.

• The Los Angeles Kings lost to Anaheim, 3-0, in the first outdoor warm weather NHL game. Man, I have to be honest with you guys. This game barely inspired me. On a scale of one to inspired, it was only an 8.7. I hope all the players involved, along with the always not-very-inspiring Wayne Gretzky (did you know he’s Canadian?), remember to take it one game at a time, and leave this game in the past and move on. If there were a backward version of the smiley face emoticon, this would be an opportunity to use it.

• Well, let’s close on the highest note from the past weekend: the NFL Pro Bowl. Wow, I mean, what an amazing event. And the format change this year made the game as inspirational as any football game that has ever been played. And could there be a more inspirational hero in the NFL than Mike Tolbert, whose two-point conversion gave Team Rice a 22-21 win over Team Sanders? I mean, what a blessing it was to get to follow that game while flying to the Super Bowl in New Jersey. I’d say my biggest regret in the past year was winning the NFC Championship Game, which prevented me from playing in the Pro Bowl. I mean, how often do I get to play the game I love alongside Mike Tolbert in Hawaii? But, I always say “let my regrets become my inspirations.” So this game double-inspired me, and if I’m being honest, I could easily upgrade it to a triple inspiration with a side of blessing. Plus, if we had lost the NFC Championship Game, I probably would have regretted not winning! Sometimes the hardest part about being inspired is having TOO much inspiration. Which … is a paradox? But that’s not right? Is it? Guys, I suddenly feel like I’m boiling up over here. PREPARATION. PERSPIRATION. INSPIRATION. INSPIRATION.