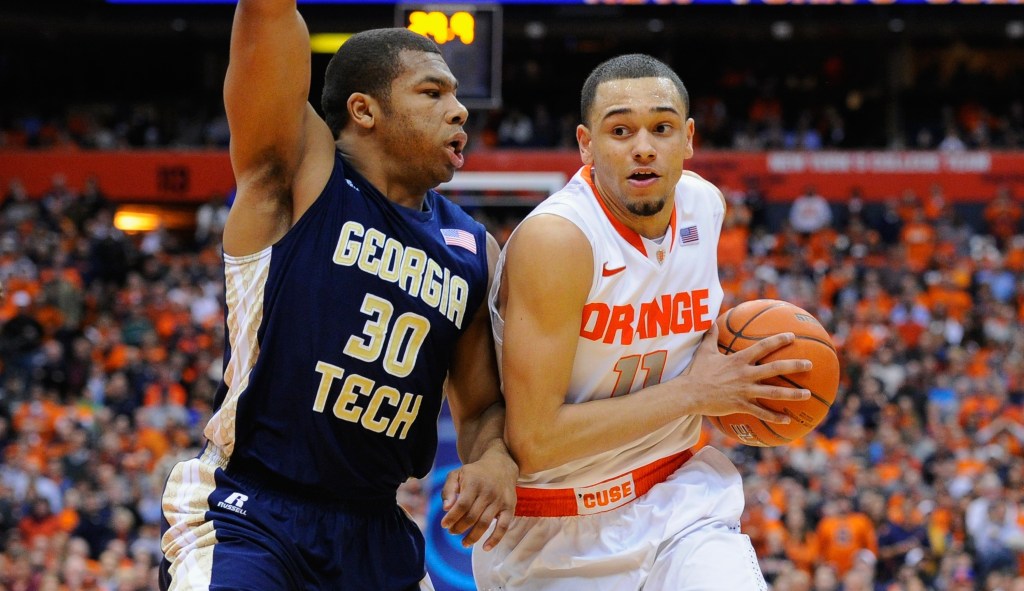 In case you were busy celebrating Fat Tuesday by polishing off a couple packs of Double Stuf Oreos, here are the five big stories you missed in sports on Tuesday:

• Syracuse continued its slide with another bad loss, falling 67-62 at the hands of Georgia Tech. “I think the boys out there learned a valuable lesson,” Jim Boeheim said after the game. “They are capable of being really bad at basketball. And that’s the first step to not being really bad at basketball.” Boeheim then paused and added, “Unless, of course, it isn’t. And it’s the first step to even worse basketball. Oh no! Soon Tyler Ennis won’t be able to put a Koosh ball in a Little Tikes hoop. And C.J. Fair won’t even be able to stand up. He’ll just be crawling around, flopping his fish arms as the ball rolls around the court.” Boeheim then took a deep breath and whispered, “It’s OK, Jim. At least they’ll be able to execute the 2-3. They’ll always be able to execute the 2-3.”

• Golden State topped the Pacers, LeBron couldn’t do enough to lead the Heat past the Rockets, but the night belonged to the Thunder. Russell Westbrook had a triple-double in 21 minutes, and Kevin Durant had 42 points in three quarters as Oklahoma City beat Philadelphia, 125-92. Just imagine what those two guys could do if they played a whole game together? Imagine … imagine … OH GOD NO! STOP IT, GUYS! OH THE POOR PEOPLE OF PHILADELPHIA. WHY WOULD YOU MAKE THEM WATCH WHAT YOU’RE DOING?? THE SIXERS … THEY’RE BLEEDING EVERYWHERE. WHO KNEW THAT FIVE BODIES COULD HOLD SO MUCH BLOOD??? OH, NOW EVERYONE IS SLIPPING ON THE BLOOD! AND WESTBROOK HAS INJURED HIS KNEE AGAIN! IT’S A HORROR! A HORROR! SUB THEM OUT, SCOTT BROOKS! DEAR GOD, SUB THEM OUT!!!

• Lakers guard Kobe Bryant sent a message to those who doubt him, saying, “revenge is sweet and it’s quick.” Bryant then explained, “I mean, you want to talk shit about my contract? Well, the money from it will arrive quickly in my account. Computer quick. And there’s so much of it. You know how much candy you can buy for $20 million!” Bryant then smiled and said, “Enough. For my purposes. Enough.”

In the thrilling world of off-the-ice NHL action:

• Roberto Luongo is heading back to Florida, after the Panthers acquired the goalkeeper in a four-player trade with the Vancouver Canucks. “Oh, really? For shit’s sake,” a visibly angry Luongo said of the move. When asked what his objection was, Luongo said, “Do you know how nice Vancouver is? It’s like all the best parts of San Francisco and a robot factory smushed together right into the crook of a magical forest. Do you know what Florida is like?” When told “not that,” Luongo said, “Exactly! Not like that. Not that at all.”

In the ongoing saga of Jerry Jones’s descent into madness:

• The Cowboys have reportedly asked star pass-rusher DeMarcus Ware to take a pay cut to help the team get under the salary cap. “He’ll do as asked,” said Jones of the request, before pulling out a plastic bag filled with fingernail clippings, “or he’ll pay the price. Just like those who came before him.” When asked if he was referring to his fingernails, Jones replied, “Of course not. This bag is filled with all the hair I’ve lost so I can make some cap space.” No one had the heart to ask whether Jones didn’t understand the difference between hats and gloves, or if his scalp had somehow evolved to grow fingernails out of it, because which was less horrifying to answer?