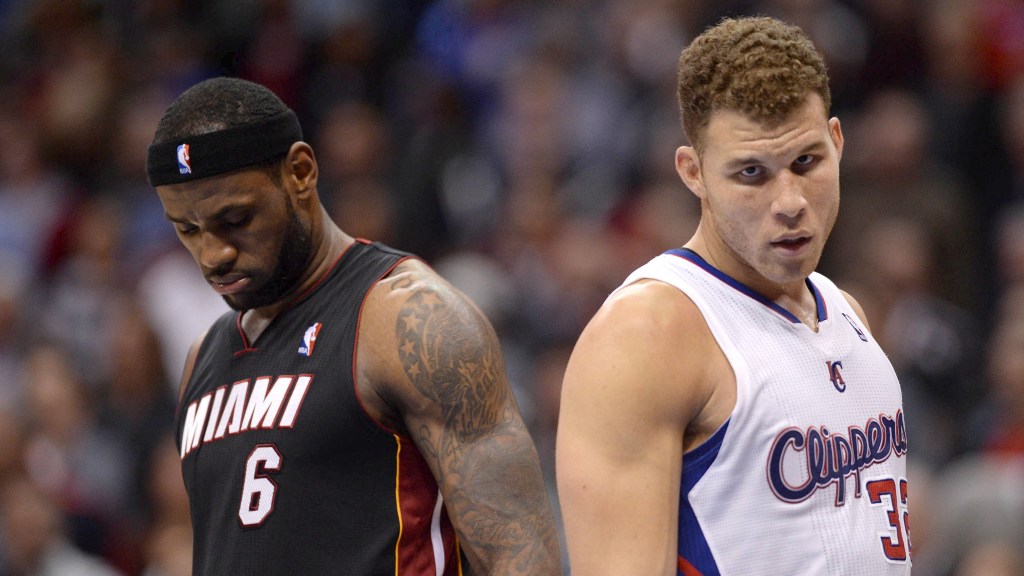 In case you were busy downing a bottle of Fireball at 12:12 in the afternoon, here’s what you missed in sports on Wednesday:

• Blake Griffin’s 43 points were not enough for the Clippers, whose seven-game home winning streak was snapped by LeBron James and the Miami Heat with a 116-112 loss. “What happened to fundamentals?” complained elderly Palos Verdes resident Art Finklebaum to his wife, Ethel, as the game was drawing to a close. “All these guys are just throwing the ball in the air and dunking it down. Why not take set shots? What happened to bounce passes?” Art then reportedly explained to Ethel that Clippers center DeAndre Jordan would be better off shooting his free throws underhand, before realizing that Ethel was too busy looking at photographs from their 1997 trip to Yosemite with their grandchildren to listen to him.

• Signing day was once again a boon for Nick Saban’s Alabama Crimson Tide, who for the third consecutive year amassed the top-ranked recruiting class in the nation. Saban credited his success to “not wasting a goddamn second answering your idiotic questions about how I do my job. I just do it. Even this comment that I’m giving you now is sapping away important time for building not my next class, which is already ready to go and better than you could possibly imagine with your useless mortal brain, but the class after that. So eff you very much.” Saban then fondled his tail and added, “I’ll see you in my dominion after your death.”

• Wichita State clamped down on defense in the second half en route to beating Indiana State, 65-58, preserving the Shockers’ perfect season. Wichita State head coach Gregg Marshall credited his team’s success to “the inspiration of reigning championship head coach Rick Pitino. I thought of him and what he would say, and that reminded me to remind my guys that Larry Bird isn’t walking through that door. Because he isn’t. That would have made things a lot harder.”

• Dwight Howard was dominant for Houston, pouring in 34 points as the Rockets took down the Phoenix Suns, 122-108. Despite his performance, Howard was disappointed after the game, saying, “I did all I can out there, but my teammates really dropped the ball all night long. At one point I went up to Suns guard Goran Dragic and was all like, ‘More like Scorin’ Dragic,’ and I needed my boy Chandler Parsons to be all like, ‘Dwight, don’t you mean Scorin’ with a chick, like you totally did last night,’ but then he didn’t say anything. It would have been so funny, dude!” Howard then shook his head and added, “I wanted to cover Dragic in Dwight-Out, but instead the whole thing left me wanting some sort of liquid I could use to paper over my memory of the entire evening. Too bad something like that doesn’t exist.”

• An undermanned Lakers team faced the rare problem of ending a game with four eligible players, yet still beat the Cleveland Cavaliers, 119-108. “It’s a lovely tribute,” said injured Lakers guard Kobe Bryant after the game. “I mean, they’ve been playing with four guys on the floor almost all year, so for them to show me that respect while I’m battling to get back on the court and still grit out a win— that makes me as proud as anything that anyone who isn’t me has ever done.”

• Canadian hockey star Steven Stamkos is reportedly out for the Sochi Olympics as he continues to recover from a broken right tibia. When asked when he anticipates returning to the ice for the Tampa Bay Lightning, Stamkos replied, “Oh, the second the Olympics are over, I’ll be ready. I just can’t meet dogs that I know are going to die. It’s too damn much.” Stamkos then told a rambling story about weeping openly during the final scene of an episode of Futurama called “Jurassic Bark,” in which Fry’s dog from the past is reincarnated, and then killed again by a jealous robot. “When they show how much Fry’s dog loved him,” Stamkos said, tears flowing down his face just thinking about the episode, “it makes me realize that I can’t possibly go to a place where I could meet a dog destined to suffer a similar fate. The dog just waited for him … it just waited for him. Why? WHY?”

• Despite fouling out in double overtime, Tim Duncan’s season-high 31 points were just enough for the Spurs to top the Washington Wizards, 125-118. When asked to rate his eventful evening, Duncan shrugged and said, “On a scale of 1 to 10, I would rate it a basketball game.”

• More than 700,000 people streamed into the streets of Seattle to celebrate the Super Bowl champion Seahawks, who brought the first major professional title to the city since the 1979 Sonics. “OH PETE CARROLL PETE CARROLL PETE CARROLL,” Seahawks head coach Pete Carroll said at his post-parade press conference at CenturyLink Field. “WHAT AN AMAZING WAY TO END THE SEASON. BUT THIS IS THE END OF PETE CARROLL AS YOU KNOW HIM. I EXPECT YOU WON’T SEE ME FOR MONTHS AS I ENTER PCHP, A PETE CARROLL HIBERNATION PERIOD, WHICH ALLOWS PETE CARROLL TO GO WITHOUT SLEEP FOR THE ENTIRE REST OF THE YEAR.” Carroll was later seen in Olympic National Park, digging a den and gathering berries so he would not need to move for the next 90 days. I think I speak for all of America when I say we’ll miss you Pete, but please, please get some sleep.