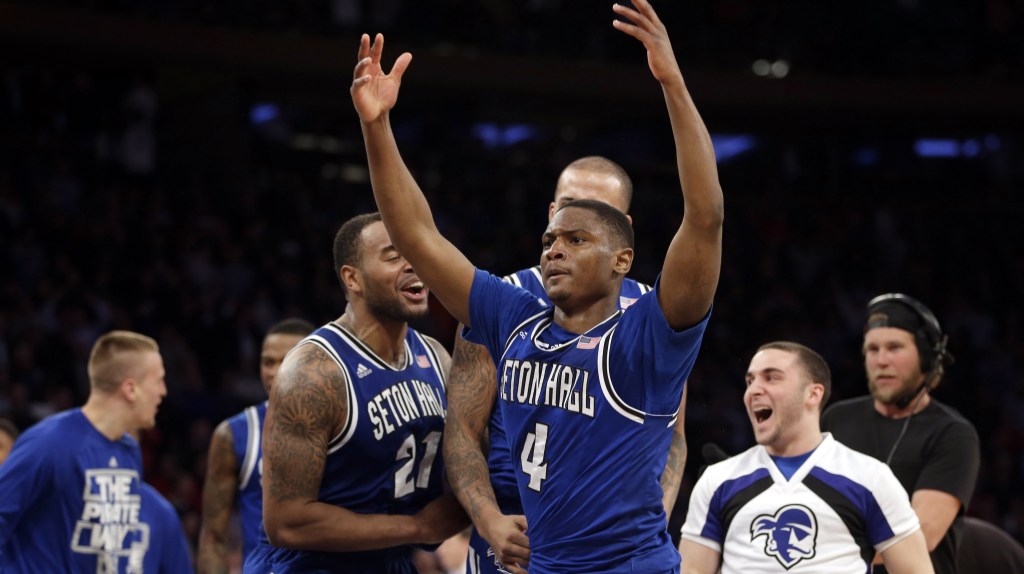 In case you were out telling your clients not to use March Madness as a legal defense again this year, here are the six biggest stories you missed in sports on Thursday:

In news you can misuse when constructing your bracket:

While top-five squads Arizona and Louisville were blowing out their opponents, Sterling Gibbs’s buzzer-beater gave the Seton Hall Pirates a shocking 64-63 win over beleaguered no. 3 Villanova, jeopardizing the Wildcats’ chances of securing a top seed. “We decided to pump up the team beforehand,” Seton Hall head coach Kevin Willard said after the game. “So we showed them Captain Phillips, a tale of a pirate overcoming overwhelming odds to capture Tom Hanks. And then we strategically turned off the movie like 20 minutes before the end and told all the kids that good movie endings are totally ambiguous, much like the moral center of the film Captain Phillips.” When asked why he didn’t just show the Pirates of the Caribbean movies, where the pirates actually win, Willard replied, “Well, look at the hotshot who’s gunning for my job.”

Andrew Wiggins and Kansas outlasted Oklahoma State to win their Big 12 quarterfinal matchup 77-70 in overtime. With Wiggins fulfilling his promise in Jayhawk blue, am I the only one hoping Kansas now somehow fails to make the Sweet 16? I mean, come on, hasn’t Bill Self been begging for his own recurring About Last Night feature, sure to be a favorite for generations to come? Eh? Is that too much to ask?

University of Kentucky fan Tyler Austin Black made news by getting a tattoo predicting the Wildcats will win the 2014 national championship. Now, Black’s confidence may lead you to pick Kentucky despite the team’s poor season, but I would strongly encourage you not to go down that path. Having spent a fortnight in Kentucky doing whatever people’s tattoos told me to, I learned a number of horrifying lessons, chief among them: Do not go to Kentucky and spend a fortnight doing whatever people’s tattoos tell you to do. With hindsight, I wish I had learned that lesson almost any other way.

Russell Westbrook and Kevin Durant had 29 points apiece as the Oklahoma City Thunder beat R. Kelly and the Los Angeles Lakers 131-103. Things are no fiesta for the Lakers, who no longer believe they can fly, as they’re currently trapped in the Western Conference cellar, starting a 47-year-old R&B star deservedly dogged by controversy for keeping a number of felonies on the down-low … wait a second … oh my god, no … That’s Ryan Kelly! It’s so much worse than I thought. The Los Angeles Lakers are led by former Duke forward Ryan Kelly, who I think we can all agree is the remix to “Ignition.”

The resurgent Chicago Bulls grabbed another great win, this time topping Jeremy Lin and the Houston Rockets 111-87. This was an embarrassing loss for the Rockets, as the shorthanded Bulls were led by Mike Dunleavy, who, while good in his prime, is 59 years old and way too overweight to play NBA basketball … wait a second … oh my god, no … That’s Mike Dunleavy Jr.! It’s so much more embarrassing than I thought! The Rockets were shut down by former Duke forward Mike Dunleavy Jr., who is most certainly not the world’s greatest.

In news you will forget between now and September:

Two NFL franchise cornerstones, Panthers wide receiver Steve Smith and Patriots defensive lineman Vince Wilfork, are likely to be with new teams soon, after Smith was cut and Wilfork requested his release. Smith said of his future, “If that happens to run through Bank of America Stadium, put your goggles on, because there’s going to be blood and guts everywhere,” suggesting he will show no mercy to his former team. Wilfork has not made a similar public statement, but did text out a picture of Patriots head coach Bill Belichick wearing a pair of goggles, with the caption “Help me!”