In Texas, Christmas comes in June. Once the NBA Finals and the draft are over, it’s time for the real fun to begin. That’s when you know it’s time for Dirk Nowitzki’s annual Heroes Celebrity Baseball Game. Let’s watch some tall guys try to hit a baseball.

This sold-out event is Texas’s best-kept secret (sorry, Marfa). It has Mavericks, Cowboys, Rangers, Stars, and more — all coming together to play ball for a good cause.

The day before the actual game, Dirk held a batting practice where only a handful of players came out to get some reps. No doubt, the highlight was watching Dirk hit about 450 foul balls before successfully making contact and walking off like 2011. 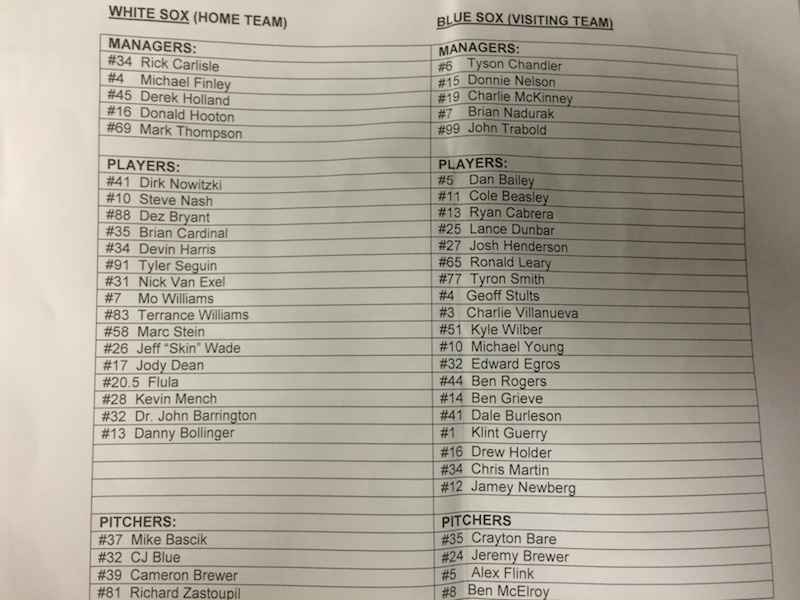 My initial thought was that the White Sox team was too stacked. Dirk, Steve Nash, Dez Bryant, Tyler Seguin, Nick Van Exel, Devin Harris, and reigning MVP Brian Cardinal all on the same team? Not to mention that they were coached by Rick Carlisle, Derek Holland, and Michael Finley. Then I realized those are just the names I recognize, and I have zero clue whether they can play baseball.

One of the few things I do know about baseball is that power isn’t the worst thing to have. I’m no expert, but putting Tyron Smith, Ronald Leary, and Kyle Wilber on the same team doesn’t seem fair. Add the most reliable man in sports, Dan Bailey, and Texas Rangers legend Michael Young, and we might be looking at the ’86 Celtics of celebrity baseball teams. After much thought, my money was on the Blue Sox.

When I covered last year’s event (in GIF form), the lineup was basically a who’s who of Dallas sports figures. This year was a little less star-studded but way more nostalgic. Grab a box of tissues and welcome your 2015 headliners …

Emotions ranged from confusion to pure childlike joy. This was the NBA’s ultimate “What could’ve been” team. Last week, Nash vocalized that he believed the Mavs would’ve had multiple championships if he had stayed in Dallas. Here’s a take — HE IS RIGHT. The last time these three were together on a playing field or court was 2004. By then, this young Mavs team had established themselves as the best offense in the NBA and had deep playoff experience — already making it to the Western Conference finals with pre-prime Dirk and Nash.

Before the game, a reporter asked Nash what it was like to be in the same uniform as Dirk, and he half-jokingly answered, “I wish it was a basketball uniform.”

Speaking of “What Could’ve Been”

Ryan Cabrera was in the building. You remember that singer with the spiky hair who dated Ashlee Simpson for a while? Well, he played baseball Saturday night, and Tyson Chandler was his manager. What a world!

Apparently, Cabrera is doing well for himself. He’s done away with the hair and holds the no. 1 spot on the Billboard dance club charts. That still doesn’t answer the golden question: WHY WAS HE THERE?

That’s when I got this text from a Dallas buddy of mine.

“Cabrera went to my high school. He was in a band called Rubix Groove.”

That explains his presence. He grew up in Dallas and still has ties to his hometown, as noted by his attempt to recruit DeAndre Jordan to the Mavs. 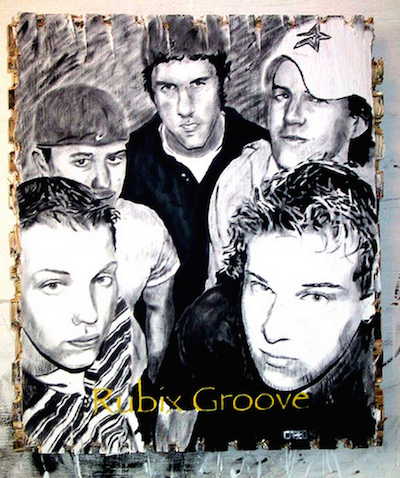 After a sad Friday night going down the Ryan Cabrera rabbit hole, I can confirm that he was in fact in a band called Rubix Groove. And yes, here are some tracks for all you Cabrera Heads out there.

Dez Bryant and the Cowboys haven’t reached a deal to determine the franchise-tagged wide receiver’s important long-term contract yet, but that didn’t stop Bryant from doing EVERYTHING POSSIBLE to injure himself Saturday night. There’s a reason Chandler decided to partake only as a manager. Any injury to a big-time player could cost millions. Lucky for us, Bryant has a golden spirit that supersedes any and all logic.

That wasn’t even the most “Dez” thing Dez Bryant did Saturday night. In between innings, someone did an in-game interview over the PA system. Bryant was in the outfield while Chandler stood roughly 30 feet from him. When the interviewer asked, “Anything you want to say to the fans?” Bryant began imploring fans to tweet at Jordan to encourage him to come to Dallas.

Reminder: Tyson Chandler. Thirty feet away! For those who are, like Bryant, completely unaware: If the Mavs pick up Jordan, it’s damn near impossible for them to re-sign Chandler. Needless to say, it was awkward. Here’s some video I took of the press area as this all went down.

Monta Ellis was slated to be on the White Sox this year, but sometime last week he was taken off the roster. I can’t imagine why. That Chandler, who is basically in the same position as Ellis, was in attendance says a lot about Ellis’s relationship with the team.

Another no-show (originally slated as a manager) was Chandler Parsons. This one was a little more curious, given how “all in” Dallas is on Parsons. I overheard several fans wondering where he was, and I remember joking with my dad that “Parsons better be hittin’ the club with Cuban trying to recruit some talent.”

@mavsmoneyball buddy works in he Hollywood club scene. Might not mean much, but thought I'd pass along. pic.twitter.com/iqFnOLwDf6

If footage of this isn’t leaked within 24 hours, this year’s free agency (and the Internet in general) is a fucking failure.

With so much happening, it was easy to forget there was an actual baseball game being played. Let’s talk about it.

There was an odd seriousness to the way Nash played. Not only did he hit the dirt multiple times, he was consistently the first to his spot on defense. It’s almost as if he were trying to prove that he’s still got a little left in the tank. If anything, I’m convinced Nash could break both his legs and still be a better athlete than me.

Baseball: It Can Be Boring Sometimes 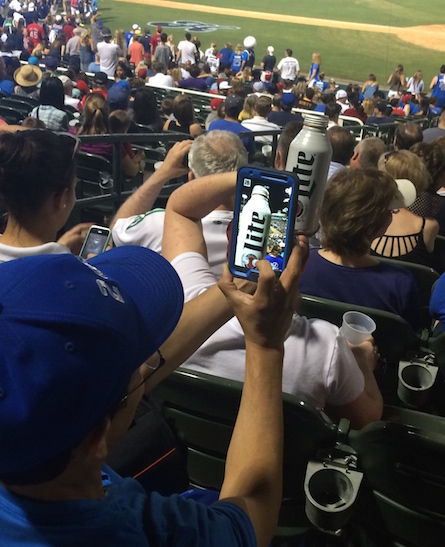 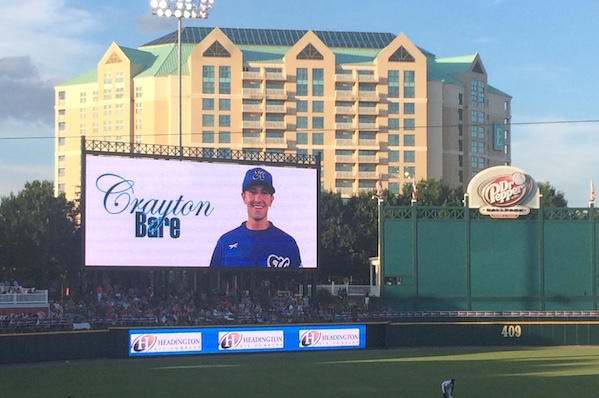 If his friends aren’t calling him Crate & Barrel, they should be arrested.

Tyron Smith and the Blue Sox

Turns out I was right about the Blue Sox wrecking this game. They won 17-5. Tyron Smith was awarded the MVP trophy for driving in a few runs and always being on base. It never really hit me how lucky the Cowboys are to have him until I saw this giant man hit a triple and run full speed to beat the throw. Unreal.

Dirk signing an autograph for everyone who asked in the ballpark …

Dirk stayed an extra hour signing autographs for EVERY fan. Dallas is lucky to have a hero like him. #HumbleHero pic.twitter.com/g1q1SIw674

… or Dirk agreeing to pose like this because a random fan asked him to.

This further proves my theory that the only reason this event exists is to remind the world that Dirk is the most wonderful human being living in it. When you think about it, he might really be a god. Perhaps we should all be bowing down like my dude here with the selfie stick. 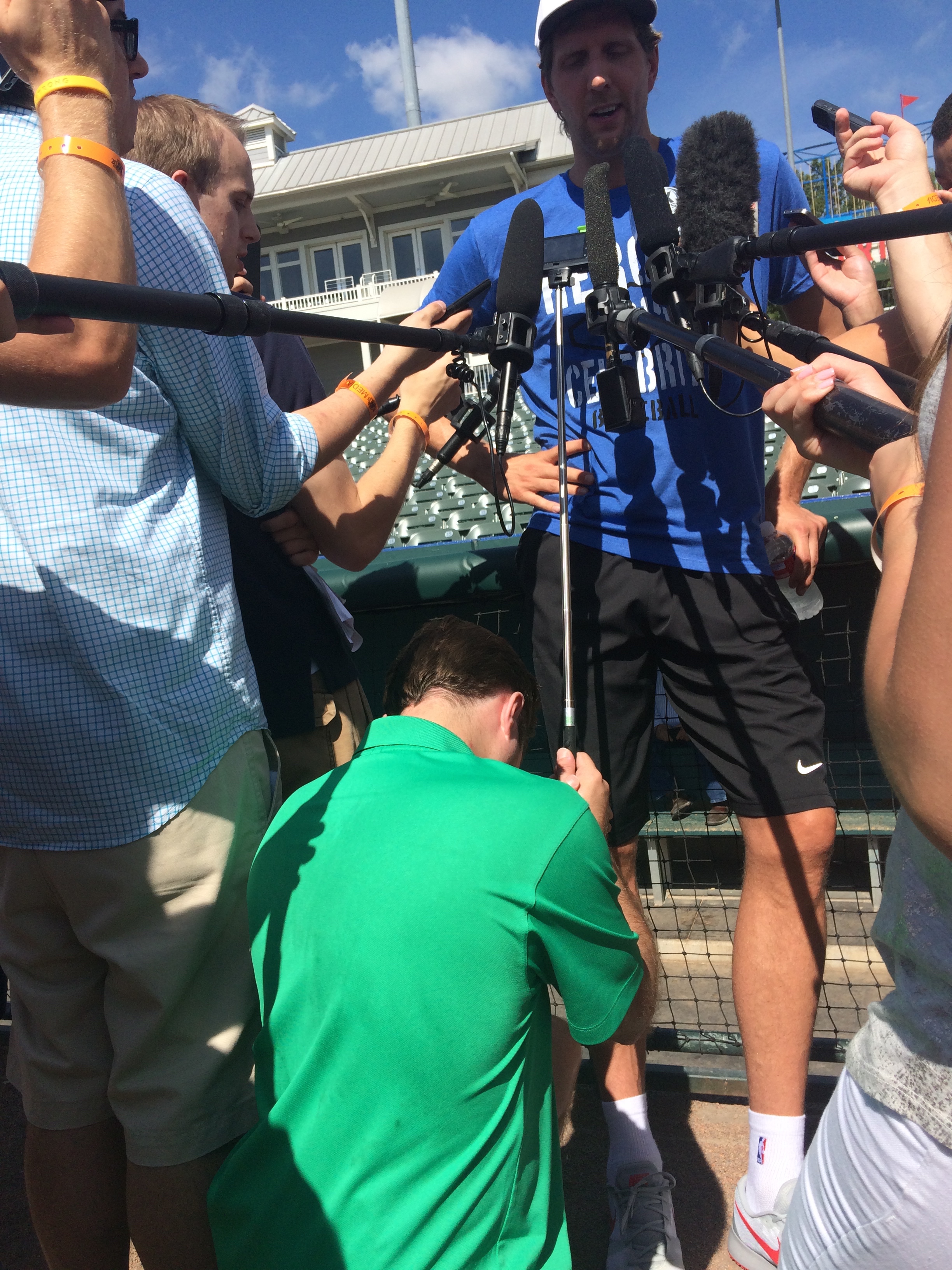 Until next year. Stay Dirk, America.