As the Grantland record states, in the fall of 2011, Mario Balotelli became MARIO BALOTELLI!!! Three years later, he’s still MARIO BALOTELLI!!! and that scream is still just as loud — but after a while, even though the yelling never went away, it started to blend into the background. Most of the time, you can’t even hear it anymore. Only at certain moments — for instance, when he drops a live mic on an Italian talking head, scores a goal against England in the World Cup, or listens to Tupac while reading I Am Zlatan with one hand and ironing a shirt with the other — do you realize it’s still there. 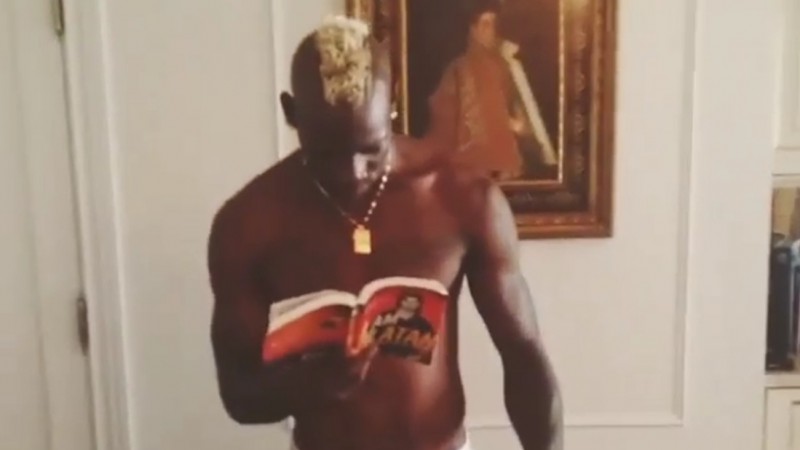 OK, deep breath. Let me say that again: Mario Balotelli has signed with Liverpool FC for £16 million. From a totally objective standpoint — which is impossible because I’m a Liverpool fan, and because the one guy who tried to talk about Mario Balotelli objectively immediately ascended to heaven and, come to think of it, may have actually been God — it seems like … a reasonable move?

Liverpool clearly wanted another non–Rickie Lambert striker after Luis Suárez left. And so they bought one of the most talented under-25 strikers in the world for less than half of what they once paid for Andy “If Stonehenge Played Soccer” Carroll. Balotelli will be taking a hefty wage cut from what he was making at AC Milan. And with a lot of very good attacking players already in place at Anfield, Balotelli won’t have to be the savior he was supposed to be for Milan or the nation-redeeming bellwether he represented for Italy.

There’s everything else — all the “!!!” stuff — sure. And maybe there exists a worst-case scenario in which, I don’t know, Balotelli gets bored with life in the Northwest — reminder: Mario Balotelli will be living in a gray city where residents are named after a type of beef stew — ends up really disliking Brendan Rodgers, invites the entire Liverpool team to a “party” that is actually a shipping container bound for Scandinavia, ships them off, and then tries to play an entire Merseyside Derby all by himself. But those are also the thoughts of an insane person — and based off a caricature of the dude that doesn’t represent reality.

In his Liverpool FC gear and training for the 1st time…it's @FinallyMario at Melwood today! #Balotelli #LFC pic.twitter.com/YLlo6JHlRi

Considering all the above, it’s easy to forget Mario Balotelli, you know, plays soccer. We often talk about these guys who are bigger than the game — but at his best, Balotelli actually does seem like he’s larger than whatever is going on between the lines. He’s so big and so fundamentally skilled (look at how perfectly he hit this volley … when he was a teenager) that he almost never seems to be moving that quickly or that dangerously — as if the defenders are thinking, “All right, man, let’s get on with it” — and then he suddenly unleashes whatever’s coiled up inside and this happens:

His per-90-minute scoring numbers have been up and down over the past four seasons — and have been inflated by a decent number of stone-faced penalties — but he always puts up good dribbling stats and, maybe more important, a ton of shots. On a team with a perpetual cyclone of chaos-making attackers, Balotelli might be able to now get those shots off in dangerous positions. Or maybe he’ll cramp Daniel Sturridge’s style and start trying to pick out top corners from midfield. Either way, I’m not quite sure it matters.

However Balotelli’s career at Liverpool pans out, it seems near-impossible to predict right now. Except for one thing: It’s gonna be fun as hell. (See above.) The Balotelli Experience is best enjoyed, well, when you actually just sit back and try to enjoy it.

Balotelli won’t be ready in time to suit up against his former team, Manchester City, because there is a cosmic equilibrium that must be maintained (and because he wasn’t registered as a Liverpool player by the deadline for this round of games). With the team’s next game away at Tottenham, Balotelli won’t play a home game until September 13. Things get pretty loud at Anfield on the weekends, and now, with the team back in the Champions League, there’ll be some screaming on Tuesdays and Wednesdays, too. Listen for Balotelli’s name — we’ll soon find out if we can still hear it.