Watt and I were paired up for about 30 minutes, one-on-one, at a YMCA in Houston on Monday morning. Gatorade was doing its annual Beat the Heat program — an effort to raise awareness about the risks of dehydration and heat-based illnesses. As part of the event, it paired up athletes with members of the media. You interview the athlete and then do some type of athletic thing designed to make you sweat. Then you drink Gatorade. Some people went with basketball players; others went with baseball players or race car drivers, things like that.

We spent some of the time talking, which I’ll go over in a bit, and the rest of the time doing defensive drills. It was all just very goofy. I mean, the talking part, that part was fine. I’m pretty OK at talking to people. But drills involve running, and running is basically my worst thing. Three or four years ago, it would’ve been great. I used to run all the time; it was a two-or-three-miles-a-day type of thing. Not now, though. The only time I ran in the past six months was when I thought I heard the ice cream man on the block behind our house and I wanted to catch him.

Before we started doing the drills, I said, “J.J., this is already very embarrassing.”

There were cameras filming us, some people happened to be out watching, things like that. But that wasn’t why it was embarrassing.

“It’s embarrassing because I’m me and you’re J.J. Watt.”

That being said, there was still a brief moment during the drills when I was like, “Yeah, I’m fucking destroying this. He’s probably gonna get on the phone with Coach after this is over and see what kind of roster moves they can make to get me on the team.”

We did a couple of iterations of the ladder drill — the one where you tap your feet in and out of a rope ladder that’s laid out on the ground — and I felt good. I didn’t fly through it like he did. It looked like someone had clicked fast-forward on the universe when Watt did the ladder drill. At least I didn’t tear any tendons, so that was pretty cool. I felt good.

We did this series of drills where you turn, pivot, sprint, and accelerate and decelerate around these cones. He said that a lot of players don’t work near enough on deceleration, which is a critical skill needed to be an elite NFL defender. I believed him because he’s my teammate and teammates trust each other.

When we did the cone drills, I felt like I was really on it. That was my moment. We did five different versions of it, and I didn’t fall down once. I shut it down, like, “That’s it, we’re done here, I’ve proven my point,” because I wanted that good note in his head when he called the coach. I even called my wife on my way home like, “I hope you’re ready to be married to a professional athlete because there’s a chance I’ll be on the Houston Texans practice squad this season.”

This is what it looks like when J.J. Watt goes through a cone drill: 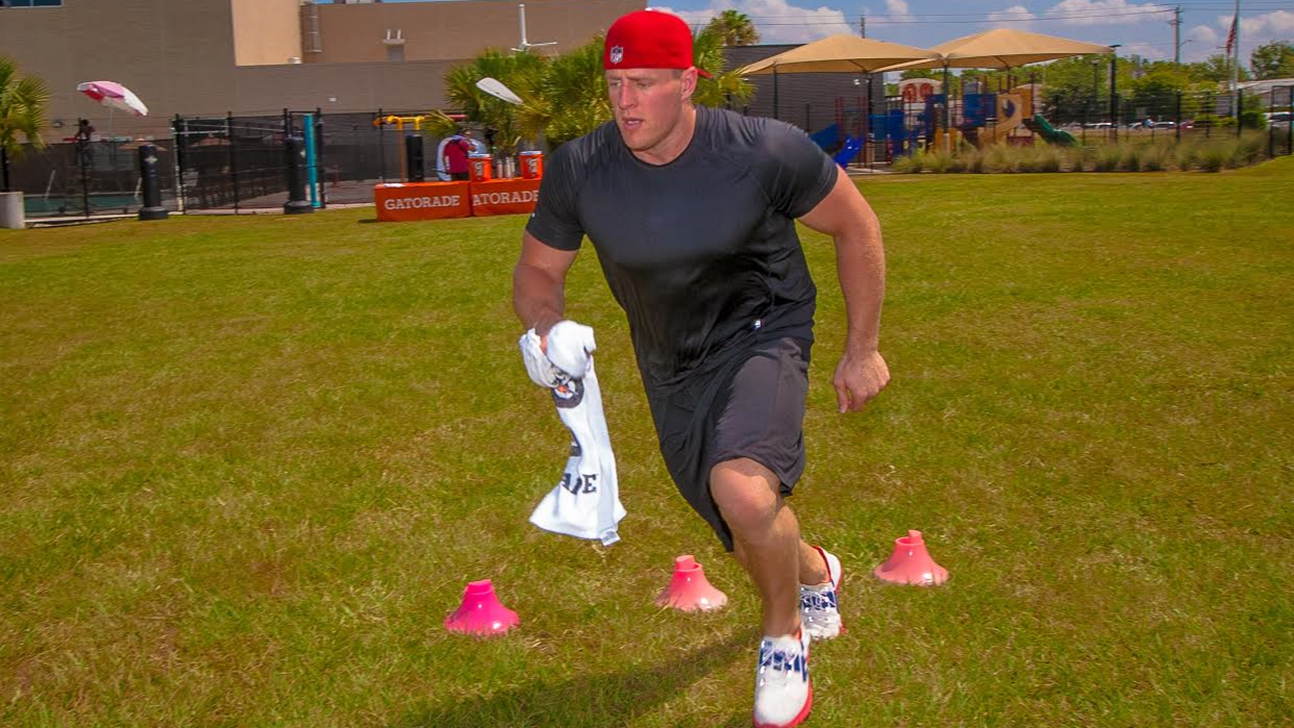 Look at his balance. Look at his focus. He’s not even trying that hard and he’s still all the way dialed in. His spacing, his pacing, his footwork: all impeccable. And look at his chest. It’s like a brick pizza oven. It’s incredible.

This is what it looks like when I go through a cone drill: 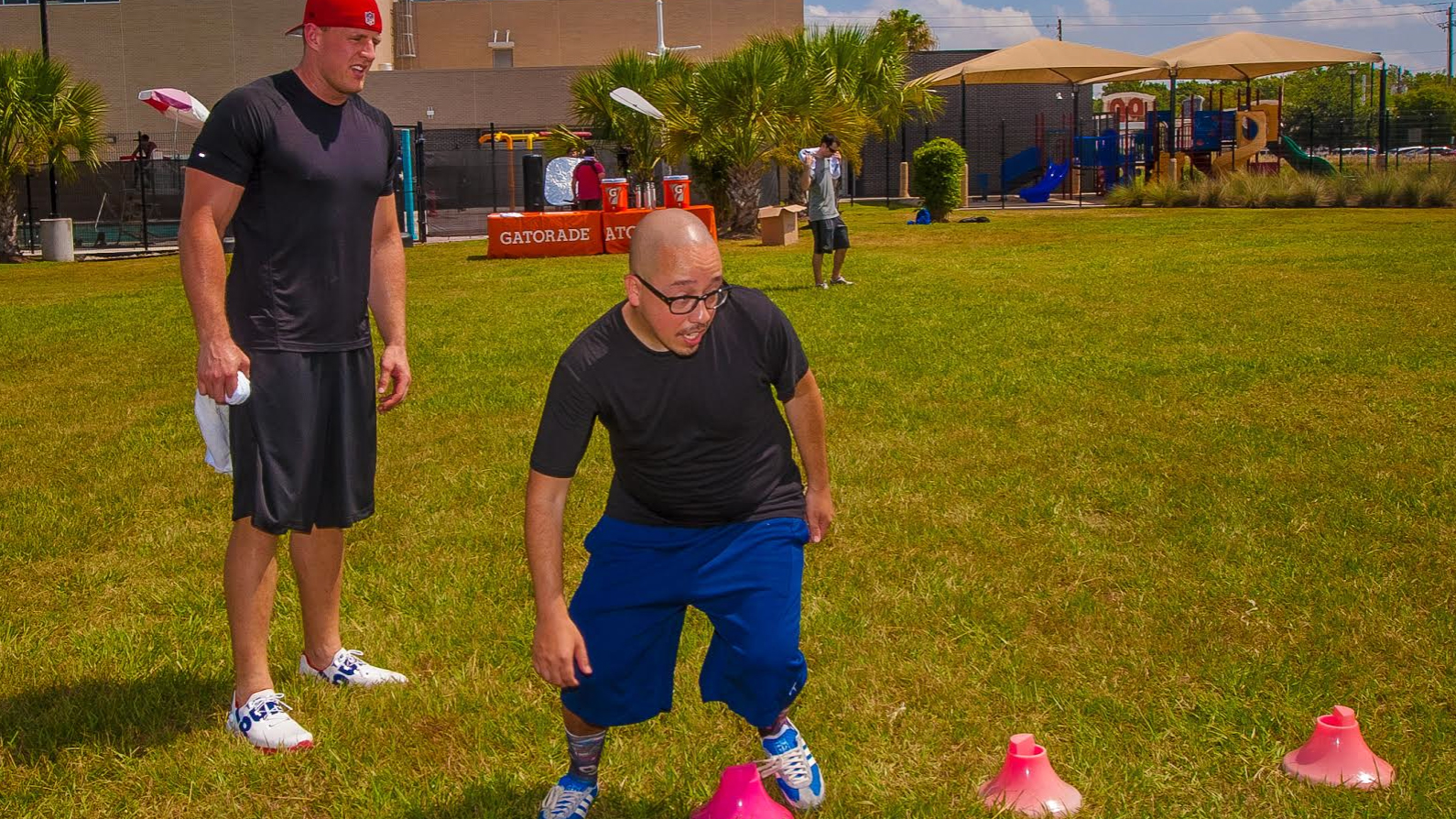 Gahhhhh. What a pudgy, uncoordinated train wreck. What are my hands doing? What’s my face doing? Why am I wearing J.J. Watt socks? How am I doing literally everything wrong, when all I had to do was step over cones? You know what I look like? I look like the guy who gets killed at the beginning of the disaster movie in some dumb way. Like, a taco truck falls out of the sky and lands on me.

Look how disappointed J.J. is in me: 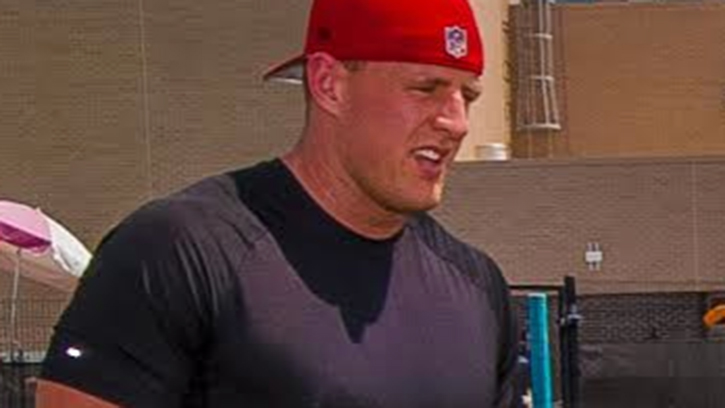 I watched J.J. Watt walk out onto the field when he first arrived at the YMCA. Before his media availability, he was to work with some kids participating in a football camp. I wanted to see how the kids in attendance responded when they realized it was him. First they were hushed (“ … is that J.J. Watt???”), then they were quite loud (“ … THAT’S J.J. WATT!”). It was neat. There’s an obvious bigness to Watt, but there’s also a philosophical bigness to him. The field seemed to lean toward him. As all the kids gathered in around him, it looked like when a cruise ship sets in on a port, only this particular cruise ship had 20.5 sacks last season, is very handsome, and signed a record $100 million contract last year.

J.J. Watt was talking. He did this in a small conference room inside of the YMCA, after he’d coached the kids at the football camp for half an hour. There were three other people there when he told the story — a photographer, two PR people, and me. This was before we went outside and did the drills.

We talked about a few different things. We talked about the cabin that he bought in the Wisconsin wilderness — the news of which acquired an almost instant mythology when it leaked out to the media.1 We talked about Andre Johnson and whether Watt had been in touch with him since he was released by the Texans and signed by the division rival Colts.2 We talked about working out — which he is a fan of and which I am not a fan of. And then he told a story.

He says it’s not as remote and intense as it’s been made out to be.

Watt said they had texted, but declined to reveal what they said to each other.

The story was about a thing that happened to him while he was catching fly balls with his coach at baseball practice back when he was in early elementary school. But really it was about motivation, which is all that most anyone wants to talk about with J.J. Watt.

“She mishit one and I ran and dove and caught it,” he began. He was very tempered while he spoke. J.J. Watt doing an interview is entirely different from J.J. Watt working the room, or working a YMCA facility for that matter. Over, say, maybe 75 minutes or so, I watched him move from coaching the teenagers on the football field, to play-dancing with very tiny children on a playground, to charming a group of older women gathered around a table in the lobby. He didn’t actually glow, but he basically did. When he walked by the older women, one of them shouted, “Come over here by us,” and he did. As he strolled up he said, “Nobody told me the Beautiful Ladies Club was meeting here. How come I’m not in this club?” That’s him when he’s mingling with people in public, and he’s very good at it.

When he’s answering specific questions about specific things, though, he doesn’t laugh or smile all that much. He’s focused, and it’s unnerving. He is still very polite and very accommodating, mind you, but without the smile, it’s much easier to remember that he could pick you up and throw you a great distance.

But back to his story:

“She mishit one and I ran and dove and caught it,” he said. “It was like she’d never seen a diving catch before in her life. And the way she reacted motivated me to want to do it again and again and again. I loved the way that … it was like … she saw progress. She saw something in me that she hadn’t seen before.”

He spoke a bit about other things before buttoning up his point.

“My whole life I’ve been trying to make people proud. My motivation is very different now, but that’s kind of where it all stems from.”