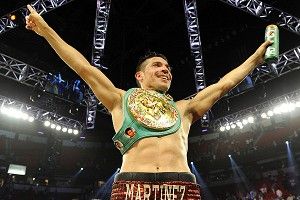 To the sport I’ve been watching and writing about the last three Saturday nights, I ask this question: Who are you, and what have you done with boxing?

You superficially resemble boxing, with the four-sided rings and the dudes wearing gloves all punching each other and spitting into buckets and whatnot. But where are the two steps back for every step forward? Where is the sound of gunshots as you shoot yourself in the feet taking those backward and forward steps? Where are the horrid scorecards that beget conspiracy theories, the body slams resulting in no-contests, the impassioned press conference trash talk that precedes 12 rounds of passionless mauling?

Oh, wait. What’s that I see? Two feuding promotional companies putting the fans last by directly counter-programming each other and forcing everyone to miss one of the year’s biggest cards live and go Twitter-dark for a few hours? One of those companies blatantly lying about ticket sales? An egregious mismatch between a junior middleweight and a junior welterweight? An un-retirement announcement from a superstar fighter who seemed to have made that rare, perfectly timed retirement a few years earlier? Ah, this is you after all, boxing. You are that deeply flawed, chaotically operated sport I love. Still, I must admit, I almost didn’t recognize you. Whether you’re actually turning some sort of corner and cleaning up your act, or this is just a case of putting lipstick on a pig, the fact is that you’ve delighted the hell out of me for the first half of September.

Over the course of three Saturdays, we’ve seen plentiful evidence of what makes boxing so riveting at its best, and relatively little of what makes it so revolting at its worst. Expectations have been exceeded on all three of those Saturdays — and for several of those fights, expectations were pretty high to begin with. None of this means boxing is ready to go mainstream again, ready to challenge the NFL for America’s attention. It just means the doubters are being shown that, yes, there is plenty of potential for life after Mayweather and Pacquiao. It means that boxing is on a bit of a hot streak. It means that we can be proud to be fight fans, able to refer to boxing as a pleasure without having to use that “guilty” qualifier. If boxing is the red-light district of sports, it’s currently a red-light district where the prices are reasonable and the services are as advertised. Here are six reasons why, for the moment, boxing doesn’t suck:

1. Because of the Last Two Minutes of Martinez-Chávez

The countless comparisons to Julio César Chávez Sr. vs. Meldrick Taylor were understandable, but the reality is that the drama of that final round from 1990 was a logical culmination of 12 rounds of tenacious effort from “J.C. Superstar.” When Julio Jr. nearly did the same thing to middleweight champ Sergio Martinez, decking him with half a round to go and frantically trying to finish, it was entirely illogical and wholly unrelated to the 11½ rounds that preceded it. This came from out of nowhere. This was a true Hail Mary, as compared to the steady, move-the-chains two-minute drill executed by Papa Chávez 22 years earlier.

Junior didn’t quite get the job done, of course, but it wasn’t for lack of trying, and it wasn’t for lack of cooperation from the all-testosterone Martinez, who apparently learned his survival tactics from Tommy Hearns’s first fight with Ray Leonard. By the time Martinez made it to the final bell, a one-sided ass-kicking bound to draw mixed reviews from those who’d shelled out $60 for the pay-per-view had turned into a win-win-win for boxing. Fans, no matter whom they were rooting for, felt satisfied after an all-time-great final round. Martinez’s reputation rose via his brilliant display for 11-plus rounds and his foolish guts thereafter. Chavez’s star power didn’t suffer one bit in defeat. And the judges apparently had their heads located somewhere other than their hindquarters, perhaps a bigger miracle than the one Chávez nearly pulled off. They each scored 10 or more rounds for Martinez, two or fewer rounds for Chávez, and zero rounds for Timothy Bradley.

2. Because of the Emergence of Andre Ward

It’s never a bad thing when a twentysomething American fighter comes along and reopens the pound-for-pound debate, which is what Ward did by dominating Chad Dawson on September 8. Floyd Mayweather and Manny Pacquiao still have more impressive track records of in-ring excellence, but to my eyes, Ward is the actual best fighter in the world right now. And the surprise twist was that he beat Dawson in reasonably entertaining fashion. Ward will probably never be half the attraction that Mayweather is. But he’s already twice the ambassador Floyd could ever be.

3. Because of Badasses Like Gennady Golovkin, Lucas Matthysse, and Marcos Maidana

On back-to-back-to-back Saturdays, a trio of foreign punishers came to the States and reminded the average beer-drinking couch potato why exactly it was that he elected not to pursue a career as a professional boxer. Kazakhstan’s Golovkin hammered Grzegorz Proksa until the Polish underdog could no longer pronounce his own first name (like the rest of us). Argentina’s Matthysse pummeled the dangerously resolute Olusegun Ajose until he could pronounce neither his own name nor Proksa’s. And Maidana, another Argentine, overcame two point deductions and seemingly fateful fatigue to rally and force a stoppage of Jesus Soto Karass. All three fights were highly entertaining (despite two of them being one-sided). We all respect and admire Andre Ward, but it’s important for fight fans to have three of these intimidating monsters for every one supremely skillful Ward.

4. Because of the New Partnership Between HBO and ESPN

Full disclosure: This website is owned by ESPN, plus I do some writing for HBO.com, so a vote of approval here for the new HBO-ESPN deal doesn’t count for much. But, non-HBO/ESPN employees, ask yourself how many times a major pay-per-view fight has ended and you turned on SportsCenter to see some highlights, only to be treated to the following clips: the referee telling the fighters to touch gloves; one fighter feinting and then landing a jab; one fighter getting his hand raised; a graphic showing you the final CompuBox stats and each man’s updated ring record. That’s because HBO PPV didn’t make any of the good stuff available. But those days are over, and the new era began with SportsCenter viewers being able to see Martinez hit the canvas in the 12th round late Saturday night and all of Sunday morning. Shows like 24/7 are also reaching a wider audience via replay on ESPN, and for a sport facing the problem of non-fans being unable to name more than two or three active participants, greater visibility is always a good thing.

5. Because of the Thrills Non-Klitschko Heavyweights Can Deliver

On the afternoon of September 8, what looked on paper like a routine keep-busy bout for heavyweight contender Tomasz Adamek turned into a life-and-death battle with Travis Walker, in which both fighters hit the canvas in a wild second round and Adamek gutted his way to a fifth-round knockout win. It served as a reminder — one we seem to get every few weeks — that if you just ignore the drama-free dominance of the Klitschko brothers, the heavyweight division is loaded with fan-friendly sluggers who, as long as you don’t put them in with the Klitschkos, are all evenly matched. Any combination of Adamek, Chris Arreola, David Haye, Alexander Povetkin, Tyson Fury, Robert Helenius, and Louis CK’s favorite heavyweight whose name he can’t remember, Seth Mitchell offers a trip in the time machine back to the heavyweight glory days of the ’70s. No, not in terms of the quality of the fighters; none of these guys could have cracked the top 10 back then. But in the terms of action, there’s a poor man’s Foreman-Lyle awaiting with any combination of these big men.

6. Because of Unsung Warriors like Rocky Martinez and Miguel Beltran Jr.

In the final undercard bout before “Maravilla” and Chavez Jr. entered the ring to make their seven-figure paychecks, junior lightweights Martinez and Beltran fought their asses off for five figures in the sort of bout that paves the way to stardom for nobody but serves as the backbone of the sport. It was back and forth all the way, both men refusing to go down, the outcome in doubt from the opening bell until after the final one. Even when everything else in boxing is going wrong, these little gems are always out there if you look hard enough. And they serve as an added bonus when, on these rare occasions, everything else in boxing is going right.