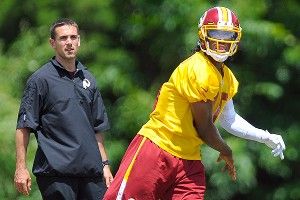 After watching The Matrix on cable last night, I was flipping channels when I noticed the replay of Baylor-TCU from the first week of last college football season. Considering my memories of what Robert Griffin III did during that second half, it seemed like the best transition from this.

This was a few weeks before Griffin would even be in the Heisman conversation, let alone the favorite. Still, his third quarter against a vaunted TCU defense was clearly a “Hey, world, this is me” moment. The deep balls at 3:02 and 3:40 are two of the better ones you’ll ever see, and as if 359 yards and five touchdowns weren’t enough, Griffin made a third-down catch in traffic on a trick play as Baylor was driving for the final score.

I can’t help but be excited for Redskins fans. Hell, for anyone who likes football. The questions around Griffin all have a basis, but I’m not sure a better athlete (not named Mike Vick) has ever played quarterback. The feeling during that second half was that Griffin was capable of anything — you know, like Neo.