On the 18th hole of the fourth round of the Open Championship, Jordan Spieth had an opportunity. If Spieth could birdie 18, something he’d done twice already this tournament, he would join Zach Johnson and Marc Leishman in a four-hole playoff to decide the winner. If he parred it, he’d go home.

Going home had an opportunity cost beyond the usual, the money and glory and shiny Claret Jug. Coming off wins at the Masters and the U.S. Open,1 Spieth had a chance to win the year’s first three majors, something no golfer has done since Ben Hogan in 1953. That would also set up the opportunity to win all four of the year’s majors, something no golfer has ever done.2

Not to mention the John Deere Classic two weeks ago, when he extinguished in a playoff some poor 47-year-old dude who’d never won on the Tour before.

Tiger won the last three majors of 2000 and the first of 2001; if you win four majors in a row, but they overlap between seasons, it’s called the “Tiger Slam,” because Tiger’s the only dude who’s done it.

That’s the thing about golf, a thing the British Open showed brilliantly on Monday during its weather-delayed fourth round: The narratives are not so easily defined. You want to make it about Spieth, or McIlroy, or Dustin Johnson, or Tiger Woods. Then, all of a sudden, you’ve got to deal with Leishman, a good golfer but just A Guy. In a sports universe of binaries and dualities, two sides squaring off across a basketball court or football field or tennis net, golf provides a kind of carnality for the viewer that’s rare. We, as in the casual-viewing general public, no longer think of golf as sexy appointment viewing the way we do the NBA, the NFL, tennis, or the one boxing match a year that Floyd Mayweather fights in. But it is appointment viewing. It is sexy. Real sexy.

Ironically, what makes golf glorious is its egalitarianism, which runs counter to the widespread perception of the game as elite, pompous, and a sport for country-club cart-riders who consider “exercise” a term used in contract agreements. In a golf tournament, all the players are essentially playing at once. Amid the titans and thoroughbreds of the golf world, your Spieths and McIlroys and Dustin Johnsons, you’ll have guys you’ve never heard of, your dad’s never heard of, and the other golfers probably haven’t even heard of. As the field winnows itself down, those golfers will become important names in a situational if not universal way; as the cut passes and they hang around, they’ll start to feel newly real, as though summoned out of nowhere. Unlike tennis, in which Novak Djokovic, Roger Federer, and Andy Murray will always be better than the players they play against — and so can overpower them directly — golf allows these guys to hang around because they aren’t playing against each other; they’re playing against the course. And as the fourth day comes into focus, the leaderboard growing solid, a good tournament will present that rarest of athletic opportunities: a chance to watch both virtuoso supermen and soft-bodied underdogs.

By the time the leaders were ready to tee off for the Open’s last day, that’s where we were. Dustin Johnson, a talented player notorious for fading on the weekend, his fiancée, and his extracurricular challenges — not necessarily in that order — had, true to form, crashed out of contention after leading at the end of the second round. Left instead were some of the sport’s best players, as well as a few guys who might as well have walked in off the street. Spieth sat one back, and in the lead were Louis Oosthuizen, a South African ranked 17th in the world, Jason Day, an Australian ranked ninth, and an Irish amateur named Paul Dunne who just graduated from the University of Alabama at Birmingham. Dunne finished fifth in the NCAA championships less than two months ago; now he was leading one of the four biggest tournaments in the sport. His college coach was caddying.

Of course, the danger of this chaos is that it can also lead to boredom. Some fourth rounds will be afterthoughts, like this year’s Masters, which Spieth won wire to wire. Sometimes they’ll be slugfests between guys you’ve never heard of. This year was neither of those, even without the sport’s two biggest names. McIlroy, the world’s top-ranked player, had to drop out because he hurt his foot playing soccer, which isn’t golf, in case you were looking for something to feel aggrieved about. Woods, formerly the world’s top-ranked player, missed the cut after playing two days of bad, broken golf.

Behind the trio of leaders, though, was a collection of the world’s best. Rickie Fowler, the world’s fifth-ranked player, teed off at 8:10 a.m. ET. Earlier in the tournament, Fowler played in rain gear that made him look like he was about to go rap in outer space. Fowler’s cool. At 8:30 a.m., 25th-ranked Zach Johnson, who won the Masters in 2007, was set to go. Eleventh-ranked Adam Scott, who won the Masters in 2013 and spent some time last year as the world’s no. 1 golfer, teed off next. Sergio Garcia, no. 10 and Tiger’s former nemesis, would start at 9 a.m. And then Spieth, who struggled in the first two rounds but got back on track with a blistering 66 in the third. 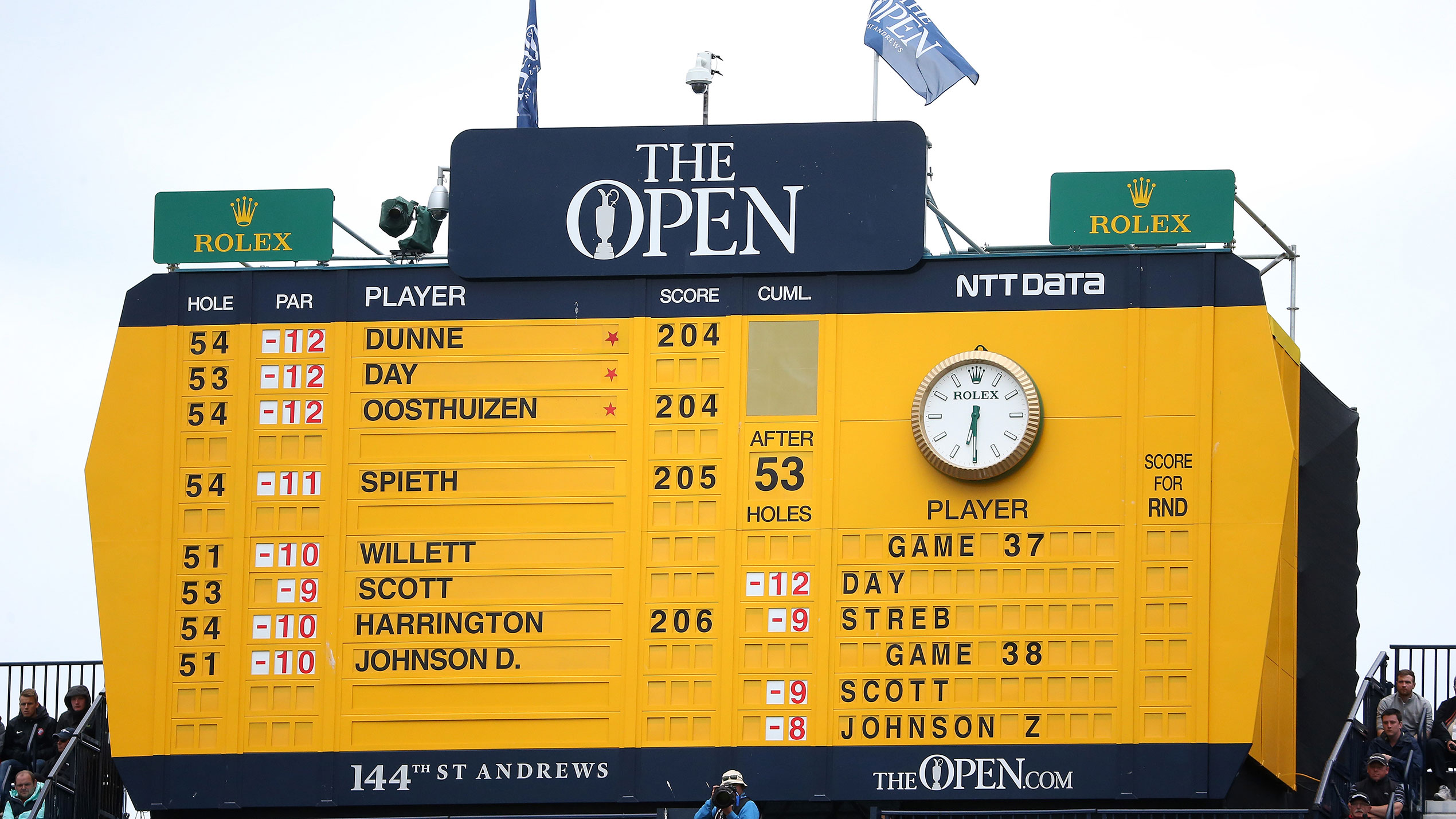 About halfway through the day, Leishman, an Australian ranked 61st, had risen into the lead. Looking a bit like James Corden in a Titleist hat, he settled into the role of upstart, fending off a bunch of sharks. Scott, his belly putter the type of affectation that makes Kevin Martin’s shot look charming, began to hit bogeys, as did Garcia, and the field took clearer form: Leishman on top, with Spieth, Day, Johnson, and Oosthuizen in pursuit.

The leaderboard was interesting for another reason, too: its wealth of pain. Entering the tournament, Day had eight top-10 major finishes and co-led through Day 3 of the U.S. Open before finishing ninth, and while Johnson and Oosthuizen at least had a major win each, they also boasted 11 top-10 finishes between them. These are bridesmaids, playing against the bride, Spieth, and the wedding crasher, Leishman.

Going into 17, Spieth had a share of the lead — tied with the already-finished pair of Johnson and Leishman. After a double-bogey on the eighth hole, he’d notched two straight birdies and began to play in that indomitable way only great athletes seem to manage, where they at least affect invincibility. If he could finish out the last two holes one under, you’d be able to hear the sound of pencil erasers. It didn’t happen. He bogeyed 17, the hardest hole on the course, and an iron shot with too much backspin rolled off the green at 18, meaning that his long and vertiginous putt — which he still, unbelievably, almost made — was too tough a task. Spieth’s defeat seemed like an accounting error, a mistake. It’s the uncanny valley of coming too close to supreme victory; it makes mere greatness seem uncomfortable. Day, Spieth’s playing partner, also finished one behind, but Oosthuizen managed a birdie on 18, getting him into what was now a three-way playoff.

The playoff was anticlimactic, as these playoffs tend to be. Leishman’s reserves were tapped, and Oosthuizen missed two makeable putts on the last couple of holes that would’ve kept him alive. Johnson won. That’s less important. I mean, I’m sure it’s important to Johnson, but for the spectator, it was the frenzied chase leading up to it that mattered, like a crowd of bodies climbing over each other. More than any other sport, golf holds the gleam of perfection, of pars and birdies and eagles and aces. On a day like this one, it’s the nearness to that perfection — Spieth’s brush with history, all the movement at the top of the leaderboard — that makes the game so torturous and rare.