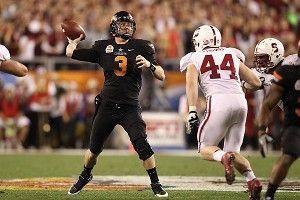 The Cleveland Browns had an interesting first day of the 2012 NFL draft. On the one hand, Cleveland got two of the draft’s most productive players: Brandon Weeden, quarterback from Oklahoma State, who threw 71 touchdowns over the past two seasons, and Trent Richardson, an absolutely ferocious running back who rushed for more than 1,600 yards as the offensive centerpiece for Alabama’s championship squad.

And yet, we’re starting to see that drafting a running back so high — the Browns traded up to get Richardson — is typically not a great idea. And Weeden? Well, let’s just say that picking a rookie quarterback who is 28 years old is not exactly without risk.

But draftniks and salary cap–ologists can debate the wisdom of trading up or discuss whether both players were drafted “too high.” (I’ve never really liked that concept anyway. If a team likes a player better than the alternatives, it had might as well go ahead and get its guy.) Right now, I think it’s safe to say that the Cleveland Browns got a couple of very talented football players who should be able to come in and help them.

Let’s start with Richardson. NFL scouts love to pepper their analysis with pseudoscientific terms and theories — saying a prospect is scheme diverse or has tight hips, thick ankles, or a mushroom tummy — but here’s my best way of summing up Trent Richardson: He’s a bad man. (On their Solid Verbal Podcast, Grantland contributors Ty and Dan wondered, somewhat morbidly, if Trent Richardson ran full speed into a horse whether the horse would survive. I am not sure there was a conclusion.) Since he arrived at Alabama a few years back, I liked him better than the Saints 2011 first-round pick, Mark Ingram, and this season he put almost all debate to rest. What makes Richardson so valuable to a team like the Browns? Well, quite simply, he’s difficult to tackle. And, as has been pointed out elsewhere, Browns starting running back Peyton Hillis broke a grand total of four tackles last season, while the norm for a solid NFL starter is somewhere closer to 15 to 20. Richardson should provide the Browns with an instant upgrade in their running game, a few yards — and several broken tackles — at a time.

And Richardson isn’t one-dimensional. He didn’t catch an enormous number of passes in Alabama’s one-back-based attack, but when he did, they counted. Indeed, Richardson was both fast and dangerous enough to not only catch short passes behind the line but also passes downfield, such as this wheel route up the sideline against LSU, itself stacked on defense with top-tier talent.

Of course what makes him really special is that once he’s caught the ball, he leaves said top-tier defensive talent lying alone on the grass, arms empty, watching Richardson rumble for more and more yards.

There’s no question that Richardson is a great prospect; the only issue is where should he have been drafted. With Weeden, though, things are more complicated. For the Browns, the good news is he has a howitzer for an arm and was hyperproductive in college. The bad news is that, assuming it takes him a year or so to develop, the one-time baseball prospect turned college football star might not be a quality NFL starter until he’s over 30 years old — if he ever does at all.

Additionally, Weeden played in probably the best pass-first system in college football — and maybe all of football, including the NFL. The offense traces its roots back to the one designed by Mike Leach, but Oklahoma State and Weeden’s version was installed before the 2010 season, Weeden’s first as a starter, by Dana Holgorsen. That system has produced lots of prolific passers who didn’t go on to great NFL careers — and Weeden also happened to throw a lot of his passes to fifth overall pick Justin Blackmon — so there’s always the worry that Weeden won’t be able to replicate his prior success.

But none of the other quarterbacks from that offense had arms like Weeden’s. And in any event, Oklahoma State’s system, which operated at a breakneck pace and required him to not only make complicated reads after the snap but often combined runs and passes into the same play, required Weeden to make more decisions about what to do with the football on a down-to-down basis than any other quarterback in the draft.

And if Weeden was a “system quarterback,” he was a very rare breed: one who not only learned the system but taught it himself. When Holgorsen left to coach at West Virginia, Oklahoma State coach Mike Gundy actually asked Weeden to give input on who should be hired to run the Cowboys’ attack. Once Todd Monken was brought in, he and Weeden held cram sessions, but it was Monken doing the learning. The results speak for themselves: Oklahoma State got even better: scoring more points, averaging more yards, and winning more games, including a Fiesta Bowl shootout with first overall pick Andrew Luck.

My real concern with Weeden has less to do with his age than with his feet. It’s a cliche for a former baseball player, but he really does often play quarterback as if he were standing on the pitcher’s mound, and doesn’t always react well to being flushed. Indeed, Holgorsen described Weeden upon his arrival at Oklahoma State as “lethargic” in almost every way — slow in his drops, slow in reads, slow in releasing the ball, and slow in moving around in the pocket. Their goal, he said, was to make him “vivacious,” something that they achieved — at the college level. The Browns are now hoping he can keep that up in Cleveland, too.