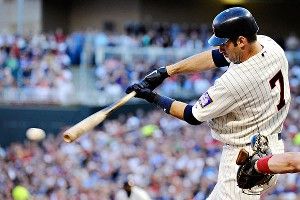 In 2010, the Twins rolled to their second straight division title. They racked up 94 wins behind another huge Joe Mauer performance, a career year for Francisco Liriano, and a stacked, dominant bullpen. In 2011, the Twins lost more times than they had in any season in 29 years. Mauer missed half the season, Liriano missed home plate all season, and the bullpen got infected with a terminal case of the sucks. Mauer’s health remains the franchise’s biggest concern (by a mile) with seven years and $161 million left on his contract; Justin Morneau might never be the same after a prolonged bout with concussions and its side effects; and the rest of the roster is staffed with mostly mediocre talent. After six division titles in nine years, the Twins’ mini-dynasty ended last year. It might be a while before a winning team returns to the Twin Cities …

… unless Bill James’ wildly optimistic projections come true, that is. Shoulder, wrist, and knee injuries combined with Morneau’s post-concussion syndrome to wreck his season, costing him 93 games and resulting in an anemic .274 wOBA; James still forecasts lots more missed time, but also a strong performance rebound. Meanwhile, Mauer’s projected for a full bounce back to elite status. The additions of Willingham, Doumit, and Carroll could provide ample on-base ability, more than making up for Jason Kubel’s lost bat. But the Twins’ lineup is stuffed with more injury risks than any other team — not just Mauer and Morneau, but also Span (played just 70 games last year), Doumit (77), and Willingham (average of just 121 games played over the past four seasons). The major goals for this season should be to let Revere develop into the team’s eventual everyday center fielder, and for the Twins to decide whether Mauer’s legs can hold up behind the plate or if he needs to shift to another position.

Let’s start with the bad news: Blackburn and Marquis are fillers, and they’re going to get rocked. The Twins have no high-upside starters in the high minors to take their place, too. But the rest of the rotation could be quite solid. Pavano’s fastball can’t dent a piece of bread at this point, but he’s averaged 214 innings a year over the past three seasons and posted the sixth-lowest walk rate among qualified starters in 2011. Liriano’s just a year removed from a 6-WAR campaign. Baker made just 21 starts last year, but was outstanding when healthy, posting a near-4-to-1 strikeout-to-walk rate. If Liriano can reharness his command and Baker can stay on the mound, the Twins’ top three should keep them in a bunch of games.

BREAKOUT PICK
Revere, by default. The Twins have enough holes to justify an aggressive rebuilding plan, but lack the young talent on the major league roster or near the big leagues to put such a plan into action. But Revere’s arrived, and he brings elite speed, defense, and contact ability to a team that could use all of those qualities. Even if he doesn’t supplant Span as the team’s center fielder and leadoff hitter right away, he’s got the skills to develop into an above-average everyday player.

IF EVERYTHING BREAKS RIGHT
Mauer’s legs get well, Morneau’s concussion-free and productive, and Liriano rediscovers an effective fastball to go with his wipeout slider. Even if all that comes to pass, there’s not enough here to catch the Tigers, maybe not even the Indians and Royals. But if the Twins do nothing more than get their three star players back, that would be a gigantic win.

IF EVERYTHING GOES WRONG
None of the above happen, and Twins fans have little left to root for but a teenager who’s yet to play a game above rookie ball.