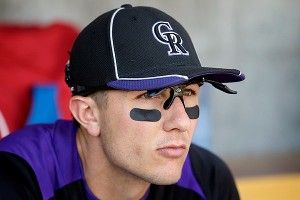 One of the top 15 players in the game in Troy Tulowitzki. A young star entering his age-27 season in Carlos Gonzalez. A potential future ace in Jhoulys Chacin. Plus … Jamie Freaking Moyer! The offseason relocation of Grantland’s baseball headquarters to Denver was a phenomenal move all around.

A stealth contender might be looming, too. The additions of effective veterans Ramon Hernandez and Marco Scutaro (on the cheap) and Michael Cuddyer (not cheap) should help (though Chris Iannetta was a solid catcher in his own right and was given away for Tyler Chatwood), Dexter Fowler and Juan Nicasio have breakout potential, and the back of the bullpen looks strong. Most encouraging for Rockies fans, smart money is on the division winner falling below 90 wins. Rocktober Redux? Could happen.

You’d feel better about the Rockies’ chances if we knew who the third baseman was going to be. I’ve made my thoughts clear (Free Brandon Wood!). Ace Rockies beat writer Troy Renck has bet on one-time shiny prospect Chris Nelson as the front-runner for the job. However the race shakes out, third base projects as the team’s biggest weakness. Colorado has enough horses elsewhere on the roster to cruise into summer with a shot at playoff baseball. Management’s ability to upgrade at third could be a difference maker this season.

Guthrie gets a bad rap in some circles, possibly due to having Orioles stink on him, but he’s hurled 200-plus innings of roughly league-average ball in the past two seasons, and that has real value, especially for a team that always burns through pitchers at hitter-friendly Coors Field. If Chacin can combine his 2010 one-strikeout-per-inning rate with 2011’s massive 56.3 percent ground ball rate (fifth-highest in baseball), the Rockies will have an elite pitcher on their hands. Nicasio’s an amazing comeback story after taking a line drive off the head last season, but he’s also an exciting upside player after posting a strikeout-to-walk rate over 3-to-1 in 13 rookie-year starts. Pomeranz had an impressive minor league career and was the centerpiece of last year’s big Ubaldo Jimenez trade, so he’s got potential too. And then there’s Moyer, who could become the oldest major league pitcher ever to win a game if he goes north with the team. Read Tyler Kepner’s fantastic profile of the 49-year-old lefty; if you can’t root for this guy, you should probably follow another sport.

If the rotation’s fascinating but also volatile, the late innings figure to be a much safer bet. Thirty-seven-year-old closer Rafael Betancourt owns a strikeout-to-walk rate above 10-to-1 over the past two seasons, which is nothing short of superhuman. Meanwhile, 24-year-old setup man Rex Brothers struck out more than 13 men per 9 innings last year, wielding a fastball that averages more than 95 mph. Matt Belisle is one of the best rubber-armed relievers in the game, ranking third in the majors with 164 relief innings over the past two years, with a sparkling 2.85 FIP. The best teams in Rockies history featured very good and underrated bullpens to complement the thumpers who stirred the offense; this year’s pen has that kind of potential, even if the rest of the team could still use an upgrade or two.

BREAKOUT PICK
Chacin. That strikeout/ground ball combination is potentially lethal. Just a question of if the drop of more than 2 strikeouts per 9 innings last year was an aberration, or the start of an unhealthy trend.

IF EVERYTHING BREAKS RIGHT
Chacin and Nicasio take big steps up, the lineup’s supporting cast fares well around Tulo and Gonzalez, Jamie Moyer wins 20 games and Brandon Wood hits 50 homers, and the Rockies claw their way back into the playoffs.

(All right, fine, scratch the Moyer and Wood parts. Still rooting for them, though.)

IF EVERYTHING GOES WRONG
The 92-win team of 2009 fades further into the rear-view mirror, as the starting rotation (sans Jimenez) lets the team down.