Trivia time: What is college sports really about?

A. The almighty dollar
B. Ethics in gaming journalism
C. The pursuit of athletic excellence at all costs
D. Education

If you answered D, congratulations: You’re Big Ten commissioner Jim Delany, who recently authored a paper advocating for the laughably ass-backward idea of reinstituting freshman ineligibility in the NCAA.

Delany has been leading this crusade for a while now, and while he’s gone out of his way to avoid calling it a “proposal,” claiming that he merely wishes to start a “national discussion,” it seems fair to characterize freshman ineligibility as something that he wants.

Take a moment to imagine what this year’s NCAA tournament would have been like without Karl-Anthony Towns, Jahlil Okafor, or Justise Winslow, among others. Consider what LSU football would have been like last season without instant-impact recruit Leonard Fournette. Freshmen are often the most talented, compelling, and relevant players out there, and forcing us to wait a year to see them play would border on cruel and unusual punishment. What’s more, Urban Meyer and Jim Harbaugh, who coach in Delany’s own conference, will ensure that it never comes to pass. Still, I’m feeling a little inspired by Delany’s (admittedly archaic) imagination. So in the spirit of starting national discussions about the importance of education in college sports, here are 10 more proposals conversation catalysts for NCAA president Mark Emmert to consider.

You’ve heard of the sophomore slump, right? It’s a very real phenomenon for college students, and even has its own Wikipedia page. However, it could easily be prevented in the realm of college athletics simply by making sophomores ineligible for competition. If sophomores can’t play sports, then they can’t play sports poorly, and consequently they won’t fall victim to the dreaded sophomore slump. Second-year student-athletes would undoubtedly be happier under this rule, and studies show that happiness leads to better grades. If college sports is truly about education, then this idea should be right up Delany’s alley.

You’re telling me this guy couldn’t hold his own in the trenches? 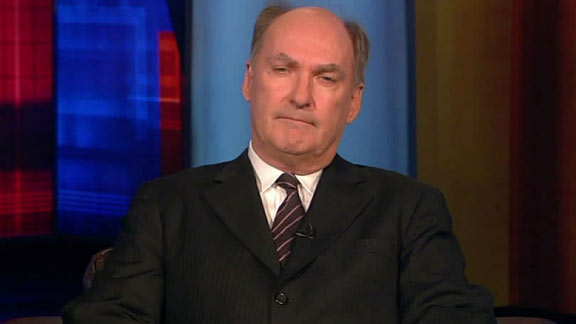 Of course he could! Plus, everyone knows that Power 5 conference commissioners are among our nation’s greatest educators, so the academic benefits of competing alongside Delany are probably manifold. I mean, the guy has a law degree.

3. Play All Sporting Events in a Classroom

This may seem impractical, but try to remember the lesson Delany taught you: College sports is about education above all else. As such, stadiums and arenas are ill suited for hosting NCAA-sanctioned events, because they’re just too dang loud to facilitate any quality learning. Classrooms, conversely, offer a distraction-free quiet space in which to compete. C’mon, Bama fans, Bryant-Denny Lecture Hall has a pretty nice ring to it!

Since the NCAA exists primarily to enhance the academic life of student-athletes, it’s time to admit that the outcomes of games are largely irrelevant. The only thing that matters is the promotion of learning, and this can be achieved without referees — or even scoreboards, for that matter. To argue otherwise is to misunderstand the central purpose of this enterprise.

The transition to upperclassman status comes with many responsibilities — too many, in my humble assessment, to allow a junior to justify wasting his or her time and energy on something as trivial as sports. After all, education comes first, and this policy would force student-athletes to concentrate on their studies for an entire year. The resulting physical and mental rejuvenation would be a nice bonus too.

How can we be sure that coaches are reaching their true potential as educators if they aren’t honing their teaching skills in the classroom on a daily basis? While their game plans may suffer a bit, they’d surely improve at conveying information to young men and women after teaching a few courses and dabbling in research. I, for one, can’t wait to read Nick Saban’s Rate My Professors page.

7. Award the National Championship to the Team With the Highest GPA

As we’ve established, the outcomes of NCAA contests are inconsequential, so we might as well do away with postseason tournaments and start rewarding teams for earning good grades. In other words, an unprecedented era of Northwestern football dominance is upon us. What a time to be alive.

8. Get Rid of Athletic Scholarships

You’d think Delany would be all for this one, since granting student-athletes free tuition based on their athletic ability seems to go against his belief that book-learning matters most. Nevertheless, as part of his “Year of Readiness” plan,1 Delany intends to raise scholarship limits in certain sports to make up for the freshmen who wouldn’t be eligible to compete. More scholarships is fine — as long as they’re awarded based on academic merit alone. The status quo is unacceptable in today’s learning-driven NCAA.

Oh wait, this is already happening.

To its credit, the NCAA is the first to remind us that college athletes seldom develop into professional athletes:

But this reality raises an important question: To adequately prepare for the demands of the workplace, shouldn’t college athletes stop playing sports after their junior year? You know, to ensure real-world readiness? I think we all know that the answer to that question is a resounding “yes.” The ball, as they say, is firmly in Jim Delany’s court.