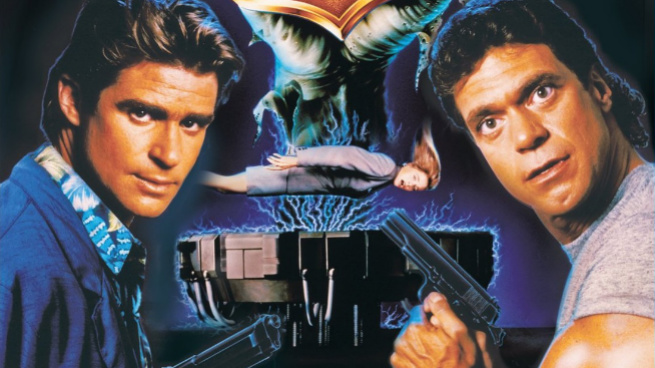 Ice Cube and Kevin Hart team up this week in Ride Along as two mismatched law enforcement agents who must overcome their personal differences and work together to solve a problem. Seems like a solid premise! Here are some of our other favorite police-friend duos.

Did I mention one cop’s a Joe Piscopo? That seems important. Maybe I should say it again. Nah, you get it.

But: Piscopo’s not even the (temporarily) reanimated cop. That’s how great Dead Heat  was. It made Treat Williams the (sort of) dead one. You might be saying to yourself, Hey, it’s a Piscopo vehicle, he’s probably got the flashier (deadish) half of the buddy team, grappling with his mortality through wiseass quips bounced off his still-breathing, straitlaced partner.

And that’s when Dead Heat has you.

https://www.youtube.com/watch?v=lMzvNmkDUkU
Chris Ryan: “Go ahead, cowboy. You got mad squabbles.” I may or may not have tried to insert the phrase “mad squabbles” into almost ever interaction I had with a human being in 2001.

https://www.youtube.com/watch?v=BfXce3utHyk
Charles P. Pierce: The true test of any iteration of the Sherlock Holmes stories is the respect given to the redoubtable John Watson, MD. The Rathbone-Bruce movies were atrocities; Watson was depicted as a toffee-nosed bumbler and not as a wounded war veteran — of an earlier war in Afghanistan, no less — and a courageous companion to an occasionally insufferable genius. (Holmes himself once allows that Watson, while not a genius himself, is a “great conductor of genius,” as close to a compliment as he ever paid anyone.) The Jeremy Brett BBC series did a lot better by him, but both CBS’s Elementary and, especially, the BBC’s Sherlock give Watson the props that Watson always deserved. I admit, I find the transformation of John Watson into Joan Watson in the American series intriguing, but Martin Freeman gives Benedict Cumberbatch all he can handle. Freeman’s Watson is brave and true, and he strikes the right combination of exasperation and awe. Ultimately, Watson is all of us.

Emily Yoshida: Square One TV was a PBS children’s program produced by Sesame Street masterminds Children’s Television Workshop. It was aimed at a grade school audience and its format, composed of fake game shows, music videos, and commercials, was supposed to emulate channel surfing on a particularly math-obsessed frequency. Every episode ended with an installation of Mathnet, a Dragnet parody (produced by the widow of Dragnet star and producer Jack Webb) about two mathematicians, George Frankly and Kate Monday (later replaced by the goofier Pat Tuesday), who wear matching blue Punch Drunk Love sports coats and ride around a hazy, perpetually 9:43 a.m., sweetly benign ’80s Los Angeles, solving mysteries with the power of numbers.

I’m not sure how much I actually learned from Frankly and Monday’s misadventures (though I seem to recall getting my first introduction to the Pythagorean theorem in the Bermuda Triangle episode) but the thing about Mathnet was that Mathnet had JOKES! Lots! I remember Mathnet being funny when I was 7, but looking back at the lovingly assembled full episodes on YouTube, I can’t help but think that the would-be sitcom writers who ended up writing jokes about the Fibonacci sequence for a fake cop show for kids had a great gig. “Martha and I, we went to Dodger Stadium just last night, Kate.” “The Dodgers played in Cincinnati last night, George.” “Yup. No trouble parking.” LOL^∞

Rembert Browne: Law and Order: SVU gives us the best cop duo of the past 10 years, Olivia Benson (Mariska Hargitay) and Eliot Stabler (Christopher Meloni). A great deal of fan fiction exists surrounding their almost-romance, peaking with the montages made by YouTube user animallover88. The above clip is the finest, however, their fleeting love as seen through the eyes of Stabler, set to Billy Joel’s “She’s Got a Way.”

WHERE ARE MY TISSUES?

https://www.youtube.com/watch?v=CVyg16jw4UA
Zach Dionne: Last summer’s The Heat has already ascended to national treasure status for me. I don’t think there are necessarily that many people who disagree, but I know the movie is underwatched and I suspect lots of the people who did see it aren’t remembering it with the appropriate level of respect. This wasn’t “Paul Feig tries a buddy cop comedy, only with women,” this was “Paul Feig makes a buddy cop comedy that stands with the best, period (and is also quite possibly better than the infinitely beloved Bridesmaids).” Now, who do I call to get two or three of these Feig joints for each upcoming This Is the End–ish, Pineapple Express–y bro-romp?

https://www.youtube.com/watch?v=TvKu9S7yb6s
netw3rk: 1992’s Police Story 3 (known as Supercop in North America) represents, along with 1994’s Drunken Master 2, the last of the great Jackie Chan films. In PS3, Chan, reprising his role as elite Hong Kong detective Kevin Vu, is tasked with infiltrating the organization of a drug lord named Chaibat. Chan does his normal slapstick comedy–martial arts hybrid, this time with a little more emphasis on the gunplay, but it’s his partner, Jessica Yang, played by Michelle Yeoh, who steals the movie (and my heart). Chan’s movies are usually pretty heavy on the damsel-in-distress trope, so the inclusion of Yeoh as a character on an equal ass-kicking plane as Chan’s Kevin, breathes life into what could’ve been a pretty pedestrian sequel. And she does her own stunts! Check out the absolutely uninsurable-if-this-were-made-in-Hollywood motorcycle jump onto a moving train toward the end of this video.