The stunning superhero takeover of the cinema that’s occurred in the last 10 years vanquished the lingering fear of audiences laughing authentic comic-book films off the screen. Marvel Studios,1 the benign conquerers of the film industry, produces works that are as close to urtext editions of its books as possible. Studios see the insatiable throng of geeks as voices to be courted and encouraged rather than silenced and marginalized in favor of appealing to the amorphous mass we call “the mainstream.”

We live in the golden age of “fan service” — the high art of shamelessly appealing to the innate desire of all geeks to have their favorite characters faithfully re-created and adapted across all mediums of entertainment. Even with Hollywood reevaluating its relationship to enthusiast conclaves like Comic-Con, filmmakers still have their marching orders: Give us a close approximation of the stories, themes, and heroes we all first fell in love with.

This emphasis on placating our demands is a relatively new phenomenon, as The Hollywood Reporter’s Graeme McMillan pointed out earlier this week. I can still remember — with a distinct lack of fondness — the controversy over Spider-Man’s organic webshooters, Heath Ledger’s Sid Vicious–meets–The Crow Joker costume, and Dr. Doom not having a Latveria zip code. But every year that goes by brings with it fewer and fewer outbursts over canonical violations. Things are different these days. The movies are less risky, and fans are less tetchy. Hardly anyone seemed to really take it personally when Tony Stark — instead of Hank Pym — invented Ultron, or when Robin was revealed to be Joseph Gordon-Levitt. Geeks have become more pragmatic about the fine details of adaptation and far more concerned with the elusive “spirit of the franchise” being replicated. Bane doesn’t explicitly have to be an assassin from Santa Prisca powered by the Venom compound, and Ra’s al Ghul doesn’t need the Lazarus Pit for those characters to be compelling on film.

Of course, there’s the occasional head-scratching choice to give the Joker a forehead tattoo and grills or make Lex Luthor look like Mellow Gold–era Beck, but we’ve mostly come to terms with stuff like this and learned to appreciate the intangibles of a performance rather than what color pants an actor is wearing. His pants should be red! No, they should be green! Why are his pants so big? In a different time, Jared Leto’s Joker would have been the face that launched a thousand letters to the editor of Starlog. The issues we now find with these films are more often about the story and the characterizations rather than the wardrobe choices.

This grudging aesthetic acceptance is not an overnight phenomenon — it has taken years for filmmakers to build trust with the segment of the audience that’s concerned with such things. No franchise has been more preoccupied with building that rainbow bridge to Geek Asgard than the X-Men series. Films that once were obsessed with bringing our heroes down to earth are now overflowing with fan service. Today, 20th Century Fox released more photos from the upcoming ninth film2 in the mutant saga, X-Men: Apocalypse, and fans are beside themselves over how faithful to the comics many of the costumes look.

Seven have been released, with Deadpool set to release in February, a few months before Apocalypse.

The first X-Men movie, released in 2000, shoved Cyclops, Wolverine, Jean Grey, and the rest of Dr. Charles Xavier’s crew into uniforms that more closely resembled unwieldy North Face jackets than the yellow jumpsuits worn by their comic-book counterparts. Garish colors were to be avoided — the drabber the better. Mainstream audiences were not believed to be capable of taking an actor seriously in any shade brighter than charcoal. This was, at least subconsciously, a response to the thundering stupidity of Joel Schumacher’s Batman movies. I am still at a loss to explain why the Riddler had orange hair in Batman Forever. Perhaps it was to be more visible when crossing the street at night or because he had aspirations to become a traffic cone. Some mysteries should never be solved.

Of course, the only reason why giving the Riddler orange hair was jarring in 1995 was because he didn’t have orange hair in the comics, not because it’s unquestionably stupid. Imagine a world in which the Riddler did have orange hair in the comics. We would have warmly welcomed that decision and praised Schumacher for his audacious choice to follow the source material. We’re just fine with ridiculous imagery in genre films as long as that absurdity fits with what’s come before. The costumes of X-Men: Apocalypse are a prime example of that rule in action. 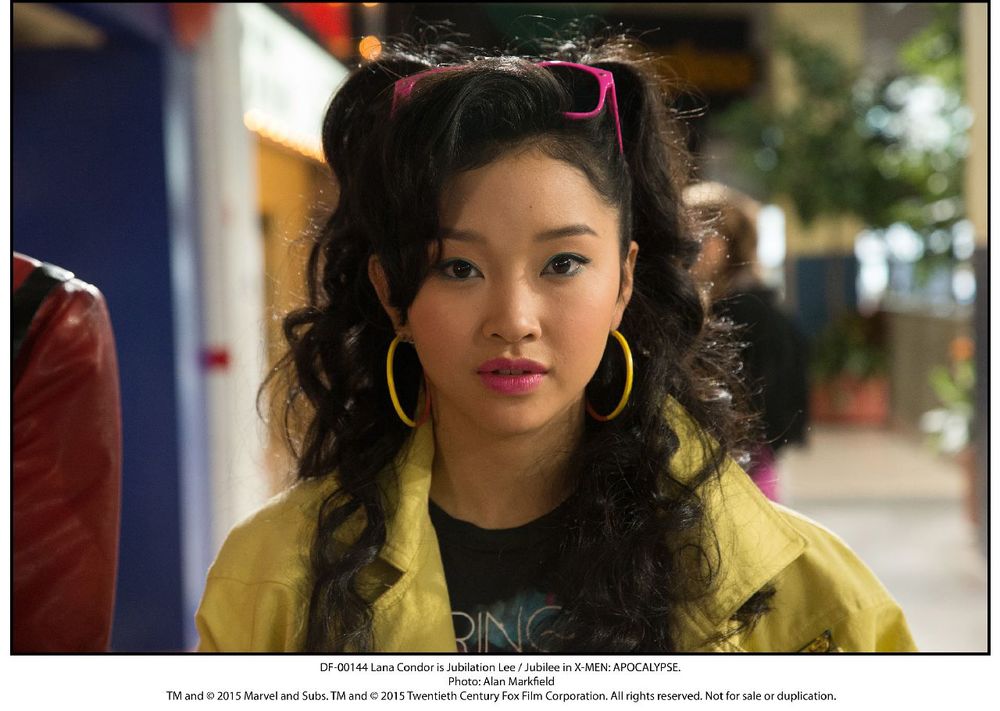 If Jubilee was in the first X-Men film, she probably would have shopped at Banana Republic. The 1980s setting, combined with a concerted effort to match Chris Claremont and Marc Silvestri’s initial conception of the character, means we get Jubilee as we first knew her. Is there really anything that can be criticized about this costume? Unless we come to find out that her trademark jorts have been replaced by clamdiggers or culottes, it’s safe to say this is a note-perfect re-creation of a beloved superhero. The same is true of Oscar Isaac as the titular villain, Apocalypse, and Olivia Munn as Psylocke. It’s thrilling to see the attention paid to characters who matter a great deal to fans but are far less recognizable than Wonder Woman or Captain America. Director Bryan Singer has even teased the possibility that the X-Men will wear those yellow spandex jumpsuits at some point in the film.

But these small glimpses of the still-in-production film give me and others a certain amount of pause. Criticisms of Isaac’s Apocalypse getup hark back to the dissatisfaction audiences had over the Green Goblin suit from 2002’s Spider-Man. Willem Dafoe’s villain was said to more closely resemble the green Power Ranger than Norman Osborn from the comics. With Apocalypse, the rap is that he looks like another Power Rangers character, alien menace/Catskills comedian Ivan Ooze. One costume was a drastic reimagining, the other aims for fealty to the source material. Both engender snickers and side-glances. On one hand, these shots emanate respect for the origins of the characters. On the other, they give me traumatic flashbacks to the Generation X TV movie. Sometimes, you just can’t win.

It’s unfair and premature to pass judgment on the film (or even the outfits) before seeing the final product, but the response — both positive and negative — is interesting for the question it asks: Are we prepared for the next iteration of the comic-book movie genre? What does it really mean to “get it right”? Is it merely to take what’s on the page and put it on film? We’re long past the point at which anyone thinks Galactus can be rendered as a giant bong rip in space, but could we truly be satisfied with a purple man floating through the galaxy in a helmet eating planets like M&Ms? Will Thanos work onscreen for longer than two minutes at a time? I’d like to think so, but the success or failure of hyper-faithful adaptations like X-Men: Apocalypse will go a long way toward proving (or disproving) that hunch. We’ll either embrace this golden age or pass into an uncanny valley of costumes so true to the source that they’ll send us running for the nearest comments section.