The Thirties dreamed white marble and slipstream chrome, immortal crystal and burnished bronze, but the rockets on the covers of the Gernsback pulps had fallen on London in the dead of night, screaming.
—William Gibson, “The Gernsback Continuum,” 1981

A young photographer is given an assignment. He is to shoot architecture in California. The buildings he photographs, “extruded by the collective American subconscious of the Thirties,” should be familiar to residents of the Southland: They are the futurist Googie diners and Space Age gas stations slowly vanishing from our strip-mall landscape. Those still standing do so in temporal vortices held together by collective nostalgia and the one accidental form of architectural preservation we have in California — that it’s usually cheaper to build laterally, abandoning the past to develop the future in the wider vistas of suburbia. 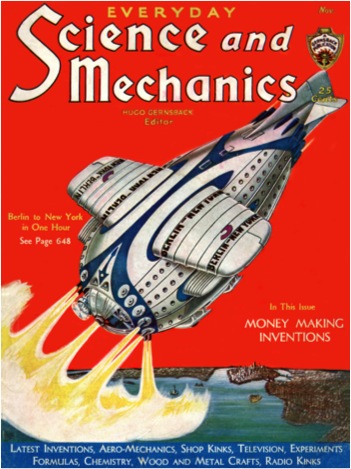 As the photographer stalks the state for fluted aluminum movie marquees and “raygun gothic” motels of white stucco and cheap concrete, he begins to hallucinate. One night, he sees a grandiose 12-prop airliner thrumming on the horizon over Bolinas, leaking light jazz. Later, on the highway somewhere between Tucson and Los Angeles, he catches a vision of a glistening city, the capital of a world in which the wars never happened. Through a membrane of probability, he peeps marble spires towering into the sky, needling Zeppelins, chrome airships, and the flawless clouds of an architect’s rendering. A vigorous young population, dressed in spotless white and hoofed in Lucite sandals, throngs the city’s floodlit plazas, popping food pills with all the “sinister fruitiness of Hitler Youth.” From the side of the road, the photographer gawks at a dreamworld of uninhibited technophilia, an ’80s-that-never-was, that never even had a chance.

Which is to say: He glimpses Tomorrowland.

This is “The Gernsback Continuum,” William Gibson’s first published short story. The titular Gernsback is Hugo Gernsback, an editor and publisher generally acknowledged as the father of modern science fiction; the genre’s most prestigious award, the Hugo, bears his name. In the early 20th century, Gernsback published what he called “scientifiction” magazines — Modern Electrics, Amazing Stories, Air Wonder Stories, Science Wonder Stories — that popularized the kind of fiction many people still associate most strongly with the genre: rigorously literal stories from the technological future, delivered with diagrammatic intensity to a primarily young male audience. Gernsback started his career publishing articles about scientific invention in magazines for electronics hobbyists; he believed in, and advocated for, science fiction as a method of selling technology to the world. 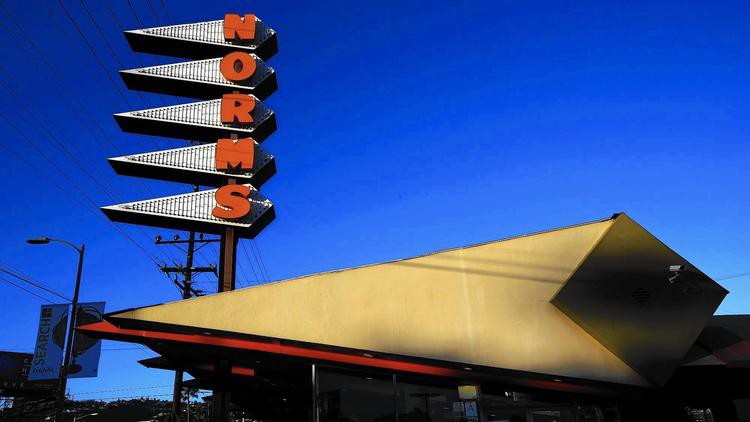 It is Gernsback to which we can partially attribute science fiction’s long adolescence and its whiff of technophilia. But he created a populist, actionable vision of the future that ignited the cultural imagination — not putting a man on the moon, but creating a climate in which the goal of putting a man on the moon became acceptable, to paraphrase Isaac Asimov. He fed a generation of engineers the brain-stuff of hope and wonder; from the illustrations gracing the covers of Amazing Stories, we got the raygun diners of Southern California and the architecture of Tomorrowland, the future-leaning Disney borough that opened with Disneyland in 1955, a little over a decade before Gernsback’s death.1

Gernsback is resuscitated, briefly, in Tomorrowland, Brad Bird’s referential and highly geeky new film adaptation of the theme park attraction. The author comes back by name: Keegan-Michael Key makes a cameo as “Hugo Gernsback,” the dreadlocked manager of a memorabilia shop specializing in retro-futuristic kitsch. Flanked by tchotchkes and ephemera evoking the Golden Age of pulp science fiction (the robot Gort from The Day the Earth Stood Still, Buck Rogers, and plenty of Gernsback’s own magazine art), he plays the fool, shilling lost tomorrows — in his store, everything is on clearance, because these kinds of whizz-bang visions of the future are out of vogue. 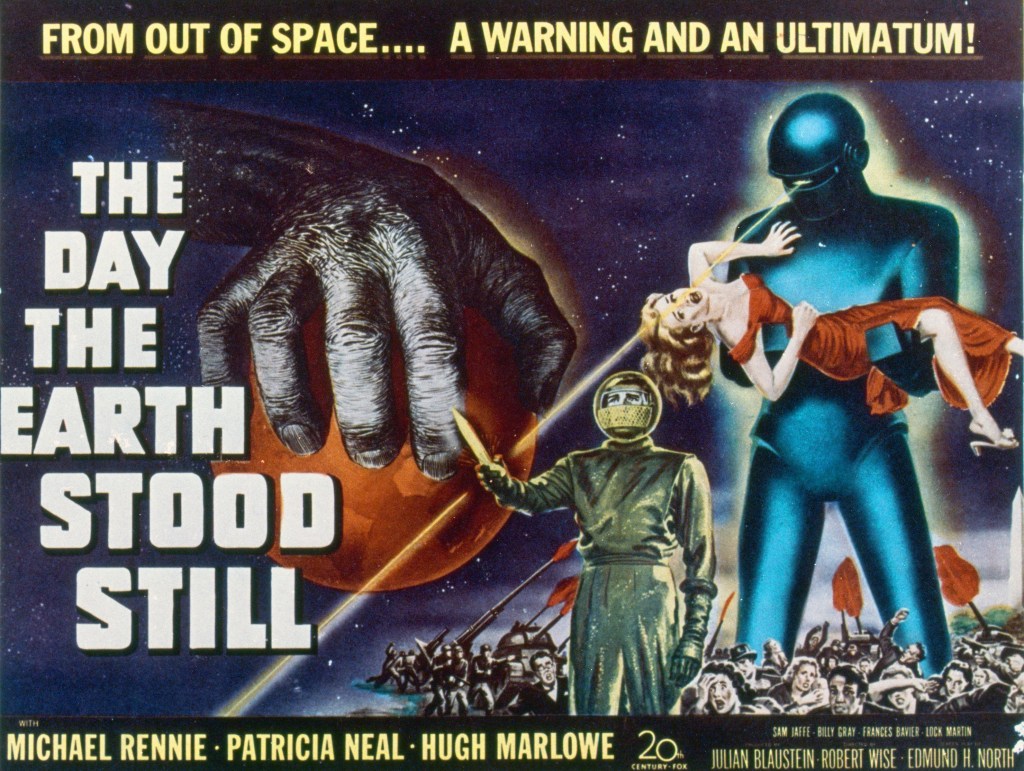 This, incidentally, is the thesis of Tomorrowland, delivered quite earnestly and explicitly at several key moments in the film: that the future used to be better. That our steady diet of dystopian cinema, television, comic books, and video games is rotting us from within, and the more we gobble up the zombie wastelands fed to us by Hollywood mythmakers, the more poisoned we are, assuming our trajectory toward such wastelands is already written. Dystopia, argues Tomorrowland, is a self-fulfilling prophecy, a tomorrow we have resigned ourselves to because it requires nothing of us today. The Titanic is headed full-steam for the iceberg and we’re on the deck eating popcorn. Bird’s movie suggests we try something different, like steering the ship for once — or writing some more optimistic stories about how to avoid icebergs in the future.

In Tomorrowland, the future is marvelous. People movers move people across pavilions of alabaster and steel; rockets skitter and whoosh from the heart of the city into the great blue yonder; in defiance of physics, swimming pools hang suspended in midair and terraced gardens coil around the columns of glistening skyscrapers. It’s a feat of production design that looks like Charles de Gaulle Airport without the patina of age, or Dubai if Dubai were a space colony and the problem of labor has been outsourced to helpful industrial robots and nano-assembling infrastructures. Clean-cut kids in padded jumpsuits career through the air wearing jetpacks, completely safe from harm; extras in generically futuristic outfits (asymmetrical hats, satin jodhpurs, metallic blue Nehru jackets) mill purposefully through the spotless streets, moving their mouths and saying nothing. Tomorrowland is a city with no underbelly, no alleyways, no derelict buildings — in short, no place for anything cool to happen. 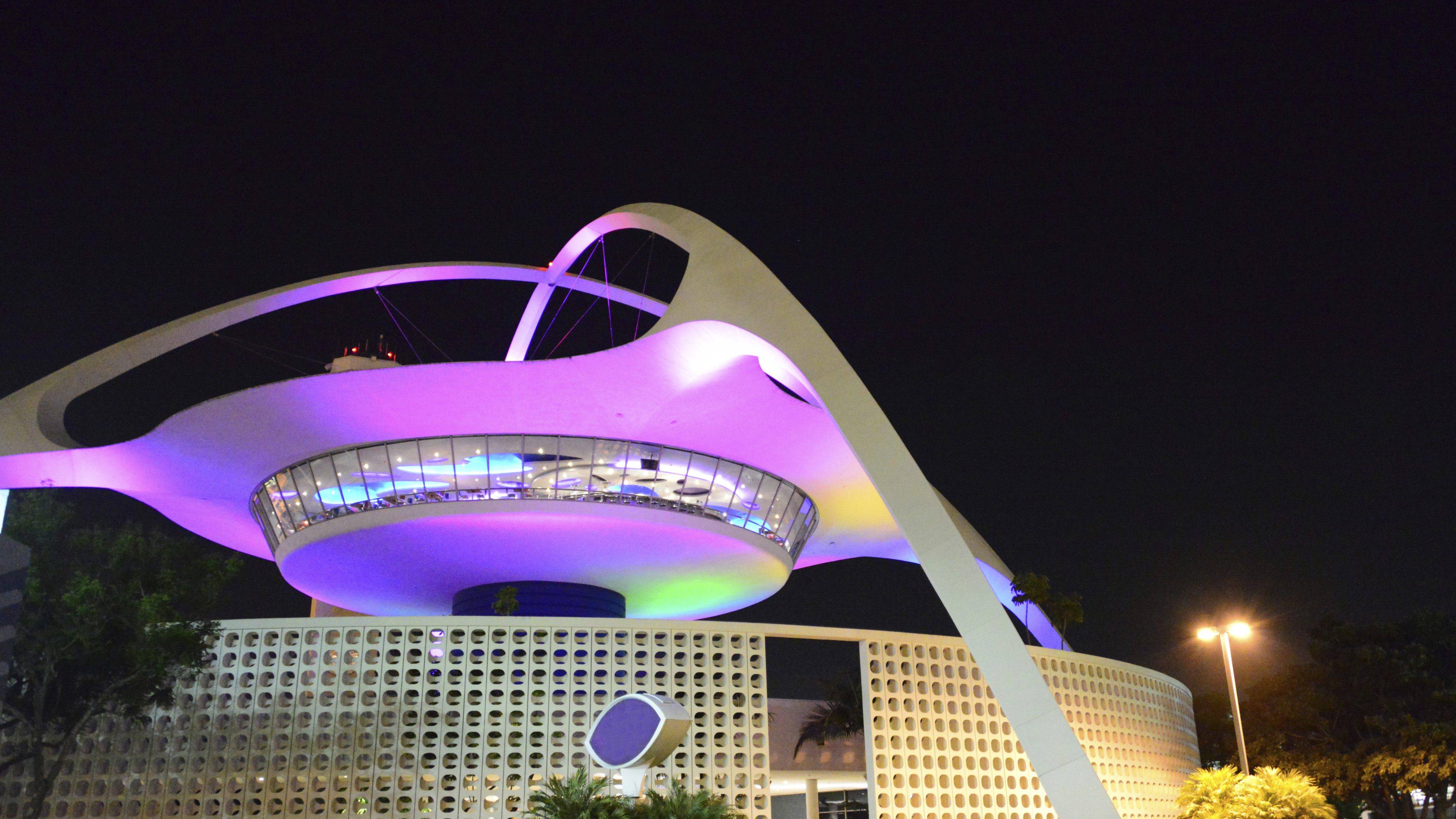 In “The Gernsback Continuum,” our photographer exorcises his “Deco futuroids” with a steady diet of porn and newspapers, tamping down the retro fever dreams with undeniable reminders of modern brutality. Gibson, of course, went on to write Neuromancer; that novel, and an ensuing explosion of gritty copycats in literature, film, and computer gaming, firmly and finally put the gleaming future of pulp magazines to bed. This moment in science fiction history is called “cyberpunk” — because cultural shifts of such magnitude are inevitably christened —and we have not really recovered from it. Science fiction was never earnest again. It became, by and large, our nightmare cosplay, a medium through which our most cynical anxieties about the future could be expressed. Cinema followed this trajectory with exceptional vigor; in science fiction films, tomorrow is very rarely something to look forward to.

Back when scientific discovery and technological development still evoked the promise of a better future, however, Walt Disney unveiled his theme park Tomorrowland with the announcement that the future “offers new frontiers in science, adventure and ideals: the Atomic Age, the challenge of Outer Space and the hope for a peaceful, unified world.” In Bird’s film as in our collective nostalgia for such a sentiment, Tomorrowland is a gleaming city glimpsed across a porous membrane of time. It’s ostensibly reserved for “dreamers,” people who want to fix the world rather than watch it fall apart, and represents some fundamental vigor that has been trampled by the cynicism of the 21st century. 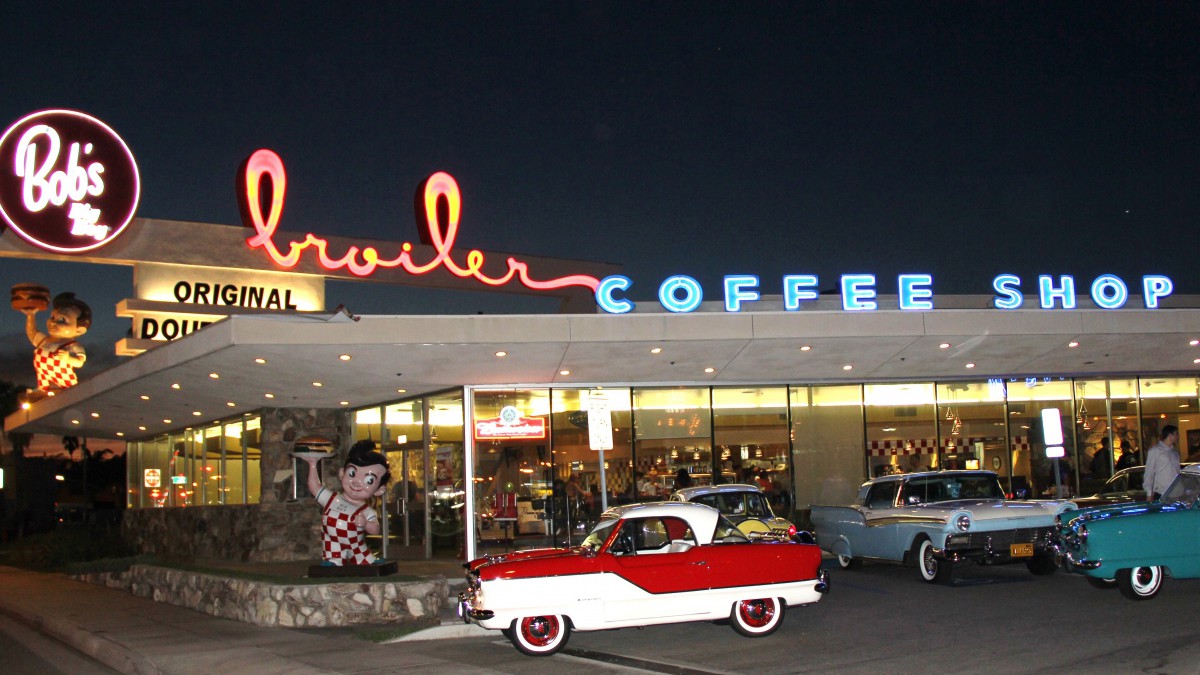 But it’s worth remembering that the idealized retro-future was always a bit of a fantasy. Hugo Gernsback was notorious for ripping off his writers, and Tomorrowland was a corporate showcase from day one, sponsored by American Motors, Richfield Oil, and Dutch Boy Paint. It featured attractions like the “Monsanto House of the Future” and an “Aluminum Hall of Fame” sponsored by Kaiser Aluminum. Its showpiece was a 76-foot tall red and white “moonliner” sponsored by TWA and designed with the help of Wernher von Braun; an early and monumental instance of product placement (“Fly TWA to the moon!”), it was phased out after the future caught up with us and the moon landing actually happened. A slightly smaller version of the moonliner now flanks Redd Rockett’s Pizza Port in modern-day Tomorrowland, a stone’s throw from Space Mountain. Its red-and-white TWA color scheme shills Coca-Cola instead of air travel.

Tomorrowland’s rides and attractions were originally designed to evoke the far-off year 1986. We move forward in fits and starts. The world is better than it was, in many ways, at the beginning of the 20th century. We live longer; we’ve wrestled some very serious diseases into submission. We collide particles and we made the Internet. But the planet isn’t faring well, and the cops keep shooting kids. 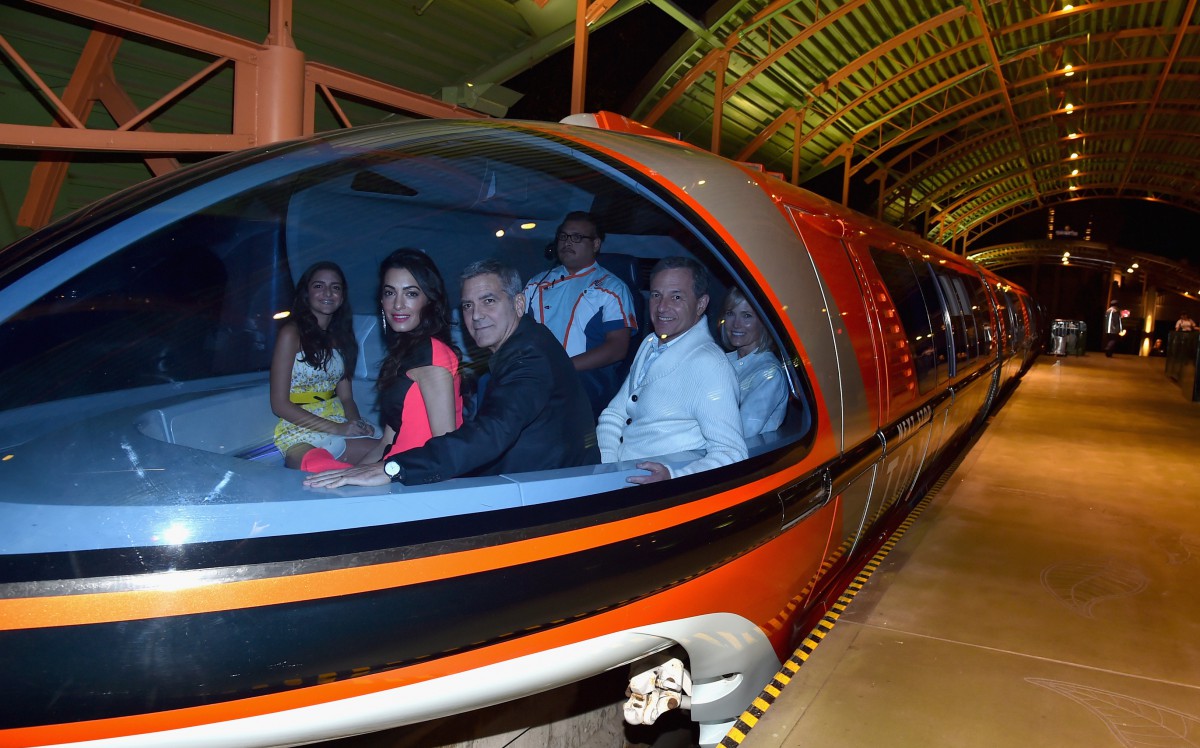 Did we fall short of an earlier generation’s aspirations, or is a unilaterally hopeful vision of the future just as unrealistic an aspiration as its opposite? Tomorrowland aims to reset our cinematic cynicism, inviting us to a city of pure wonder and imagination, but perhaps the membrane between utopia and dystopia is porous for a reason. Perhaps it’s not a tale of two cities, and we don’t have to choose between the tenebrous urban nightmare of Neuromancer (or Blade Runner, or so many American cities whose infrastructure is being stripped for scrap and sold for profit) and the glass towers and flying cars of Tomorrowland. Perhaps we can be citizens of both at once, existing in a reality of shifting and unevenly distributed potentiality, because we already do. In our climate of confusion between lived experience and placeless networks, we are like Gibson’s hallucinating photographer, blinking and shaking and looking again, across the highway, at the silhouette of an unremembered skyline on the horizon.