The score is 63-60, Thunder over the Warriors, 10 seconds left in the game, and Russell Westbrook looks totally unconcerned. In fact, he’s signing autographs. Which is fine because the game is paused. Westbrook, wearing a gray True Religion short-sleeve hoodie and matching pants, is at New York City’s Terminal 23, Jordan Brand’s cavernous white-walled indoor basketball run/event space located within a dirty-water hot dog’s throwing distance of Madison Square Garden. This particular event is EA Sports’s invite-only preview party for the latest version of its NBA Live series, NBA Live 16, which features Westbrook as its cover athlete.

Later on, Yonkers’s own Jadakiss will perform, his rat-a-tat growl spitting gravel and grime across the room like a dirt bike peeling out, and NBA super-fan Jimmy Goldstein will materialize as if from a dream involving embroidered leather pants, designer scarfs, and professional companionship.

There’s an open bar serving basketball-themed tequila concoctions; an NBA Live 16 photo booth; two pairs of custom Jordan Brand kicks to give away; three variously enormous flat-screen TVs on which people are playing the game; and, of course, the basketball court, where invitees can take a free throw after which, hit or miss, they are given an advance copy of the game. Jams are curated, cut, and spun by the much-in-demand Brooklyn-based DJ Mick.

In other words: It is a party. Which, when one considers the recent history of the NBA Live franchise, is just what’s called for. 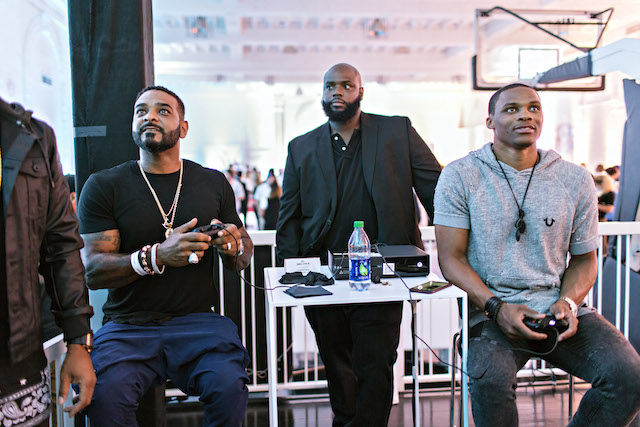 Once upon a time there was a king, and that king’s name was NBA Live. Descended from the NBA Playoffs series of games and its legendary installments Lakers vs. Celtics (1989), Bulls vs. Lakers (1991), and Bulls vs. Blazers (1992), Electronic Arts’s NBA Live franchise, first released in 1994, ruled video game consoles and PCs for years, easily sweeping such challengers as NBA ShootOut, NBA in the Zone, NBA Courtside, and NBA Hangtime into the dustbin of failed sports video game history.

Few consumers took notice when the eventual usurper, the NBA 2K series, was released in 1999 as an exclusive title for the short-lived-but-ahead-of-its-time Sega Dreamcast console. Reviewers took note of 2K’s exceptional (for the day) player models, smooth animations, intuitive controls, and intelligent AI, with Gamespot even going so far as to write, “Whether you’re a fan of other basketball games or not, once you’ve played NBA 2K you can never go back to those other games.” In contrast to NBA Live’s somewhat cartoonish approach, NBA 2K was more of a basketball simulation. In that respect it was a superior product, especially for the hard-core basketball fan.

Still, history is rife with examples of products that, for whatever reason, failed to wrest market share away from an inferior rival. (All the real Betamax heads out there are nodding vigorously.) It would take more than just putting out a better game for 2K to unseat Live. Kingdoms aren’t just destroyed from without, after all; they also have to be eaten away from within. They have to first get complacent, drunk on red wine, full from rich foods, and wealthy from lucrative licensing agreements1 so that they don’t notice the walls of the castle slowly crumbling.

That’s what happened with Live.

NBA Live 06, released in 2005, was the last iteration of the title to outsell its 2K rival. That same year, Microsoft released its next-gen Xbox 360 console, followed a year later by Sony’s PlayStation 3. Meanwhile, high-definition televisions were becoming increasingly affordable, putting slick flat-screens within the grasp of more and more people. When you drop $300 (not including games, a second controller, and peripheral knickknacks) on a next-generation video game console, and said console is hooked up to your sexy new HD television, you kinda want all that incinerated disposable income to get transmuted into a proportional childlike feeling of slack-jawed wonder. 2K, with its photo-realistic, sweat-dripping player models and just-like-watching-a-real-game motion-captured animations, provided that. NBA Live did not.

So 2K took the crown and never looked back.

By 2010, Live had fallen completely out of the top-100 sales charts. After considering the various shards of Humpty Dumpty’s shell, EA decided to totally overhaul Live’s gameplay experience, focusing on a more realistic (read: 2K-like) feel, and rebranded the yet-to-be-released game NBA Elite. A demo for the revamped title was released ahead of the 2010-11 NBA season, and it was so lousy with glitches as to be nearly unplayable. The most infamous (and hilarious) of the bugs was the now legendary Christ Bynum glitch in which the former Lakers big man would end up — for no particular reason — frozen at center court, arms out, like a virtual Christ the Redeemer. The clip echoed like a moderately viral death knell around the Internet. EA canceled NBA Elite 11 and the company wouldn’t release another game in the franchise for three years.

EA inked a 15-year marketing partnership with ESPN in 2005. Grantland is owned by ESPN.

EA resurrected the title with 2013’s NBA Live 14, a game that had such incredibad player facial modeling and animations that the company was, quite startlingly, forced to apologize for releasing it. Those embarrassing problems were largely cleared up in last year’s much-improved NBA Live 15 — not that anyone would’ve noticed, as the game barely cracked 200,000 units sold worldwide (2K15, meanwhile, sold 5.8 million copies).

But a new year brings with it new opportunities. NBA Live 16, with an improved graphics package and a nifty face-scanning feature, drops later this month. The demo comes out this week.

“We’re launching a new mobile scanning app,” Ryan Santos, a senior game designer and producer at EA, tells me underneath one of the room’s giant screens when I ask him about the new game. “You’ll be able to scan your face and put it in the game and it’s a super-easy user experience. We did a lot with the dribble systems. You’ll feel a lot more responsiveness. In terms of shooting, you can release the ball on any point of your jump and we’ve added feedback that tells you if your shot is a high-percentage shot or a low-percentage shot. The AI system has been totally revamped. Guys are gonna cut, set screens, get open. You may never have to call a play if you’re not that hard core a player. Or you can use some of the new mechanics with our screen and roll, screen and rescreen, dribble handoffs, which are really cool. Lots of new animations. We invested about 23 days of mocap time. That’s hours and hours and thousands and thousands of animations in the game to provide a variety of responses.”

All of which sounds great. But, what if no one — or only, say, somewhere in the area of 200,000 people globally — ends up buying the game? What does a disgraced former king do to get people talking about him again?

He throws a party.

Jim Jones just cut the line. On the opposite side of Terminal 23 from the enormous televisions is the basketball court. Here, people cue up to take a meatspace free throw for their advance copy of the game in either PlayStation or Xbox flavor. A minion in a black EA T-shirt and gray sweats rebounds makes and misses and checks the ball back to the next person up. And Jim Jones just cut the line. Rolls right up on his PhunkeeDuck, bypassing the queue, the minion passes him the rock, and he shoots. Miss. He wheels forward and corrals the rebound and reverses to the free throw line. Jones’ control over the scooter appears to border on the telepathic. He shoots again. Another miss. He glides to the ball and snatches the rebound. The wheels may as well be part of his body. If I owned one of these scooters, I wouldn’t walk anywhere, either. He skates a smooth arc back to the free throw line. One-handed shot. Miss. Now he’s not messing around. He rolls in for the layup, right-handed, skating left to right. Another miss which bounces right to his hands under the basket. He leans back in the stirrups, and finally puts it in off glass.

My turn. The minion checks me the ball. I bounce it once, flexing at the knees, roll the ball into my palms to find the seams, and rise up. The shot is an arrow-straight air ball that brushes the net on the way down. I leave the gooseneck up and head right for the dude with the gift bags of free games.