Some series find familiar ways to beckon readers back to their worlds. Harry wears out his welcome with the Dursleys and heads back to Hogwarts. The Pevensies come across a painting or a piece of furniture that transports them to Narnia. Jeeves mixes the young master a restorative drink. A Song of Ice and Fire has its introductory tradition, too: killing minor characters. Every book in the series begins with a prologue told from the perspective of someone incidental to the story who suffers a disturbing death within the first few pages. It’s George R.R. Martin’s heartwarming way of reminding us that we’ve returned to a brutal realm where the only characters worthy of our notice are the ones who are either actively seeking power or attempting to preserve it.

Iron From Ice, the first chapter in the new episodic video game from Telltale based on the HBO adaptation of Game of Thrones, also starts with an obscure character, a teen named Gared Tuttle. He’s the son of a pig farmer, and a squire to the lord of House Forrester. House who? The Forresters don’t appear in the HBO series, and they aren’t included on the three-page list of Stark bannermen in the appendix at the back of the books.1 Their seat, Ironrath, isn’t marked on any maps. The only hint of their existence gleaned from Martin’s archaic keyboard comes via a single sentence in A Dance With Dragons, which refers to them as one of four otherwise anonymous families with arboreal names. Although their control over the region’s ironwood gives them some strategic importance, they aren’t far removed from smallfolk in the eyes of the elite who usually hog the spotlight in the series.

Although they’re loyal to the Starks, they’re sworn to the Glovers, a subordinate Northern house, which makes them bannermen of Winterfell once removed. 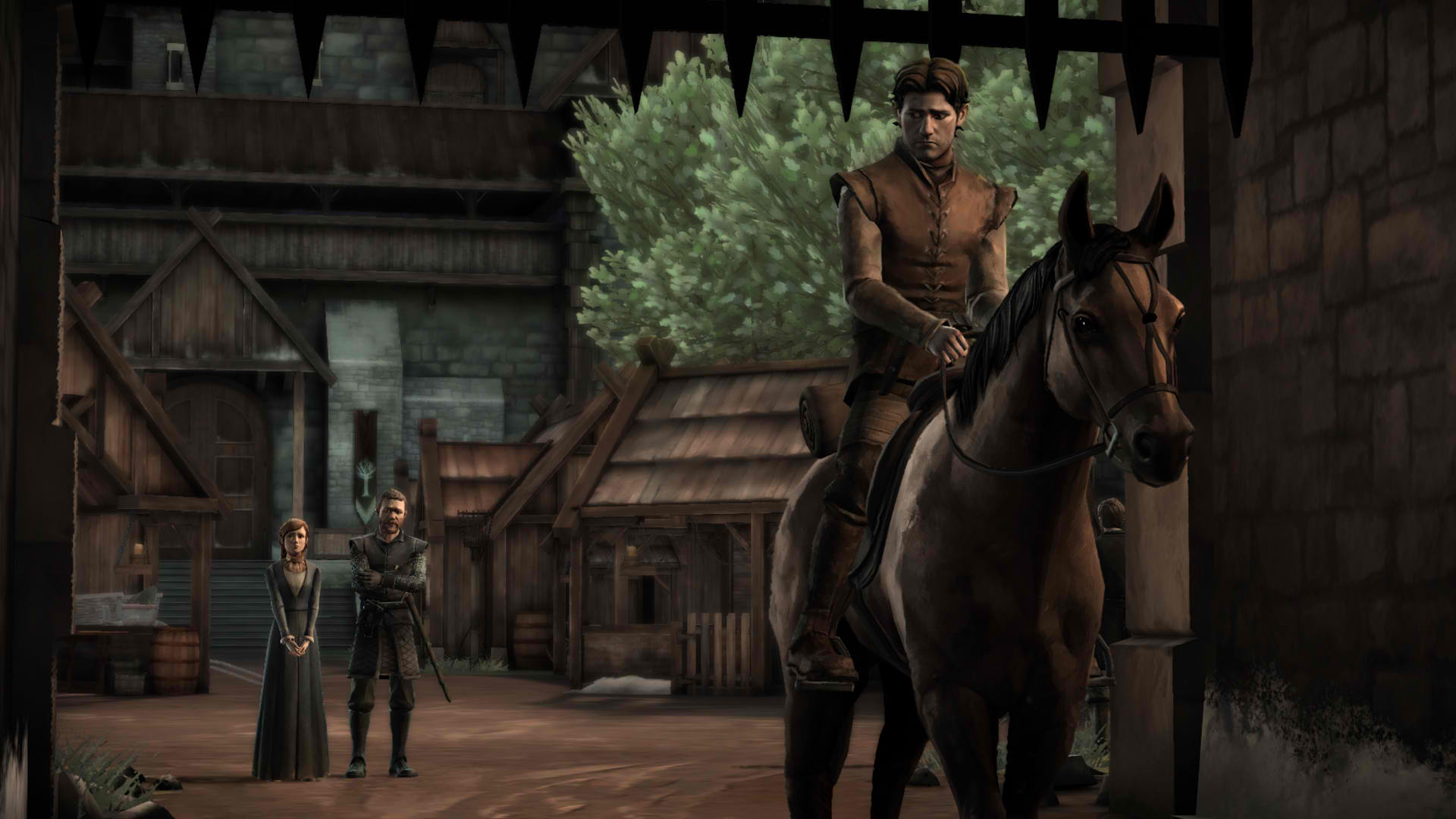 Lowborn and far from the center of the struggle for the Iron Throne, Tuttle would be disposable in the books, a Westerosi redshirt. Telltale makes him a playable protagonist — one of three in the two-hour Iron From Ice, with two more playable Forresters to follow. There are 8 million stories in Westeros, but the ones that Martin, David Benioff, and D.B. Weiss tell mostly concern kings, with an occasional nod to impaled peasants. Refreshingly, Telltale lets us experience some of the series’ most momentous events2 from the perspective of a clan on the periphery of the fight for control of the Seven Kingdoms, revealing what life is like for a lesser house that can’t avoid being buffeted by forces beyond its control. And because the books haven’t fleshed out the Forresters, Telltale’s writers have some freedom to spin their own story.

The game begins just before the Red Wedding.

What they do with that freedom tends to tread familiar ground. In addition to having a sigil that looks suspiciously like the White Tree of Gondor, the Forresters have a story that sounds suspiciously like the Starks’. Their widely loved lord is murdered early on, leaving his lady wife to look after an adolescent heir who’s forced to grow up fast. The Forrester roster also includes a younger son who sees something that spoils his innocence, and an older daughter at court in King’s Landing. Granted, the Starks aren’t the only fractured family in Westeros, but the Forresters are a few direwolves away from sending identical Christmas cards. And like the Starks, they’re beset by scheming Lannisters and sadistic Boltons, which isn’t anything that fans of the series haven’t already seen. Naturally, the new characters cross paths with some series regulars, all of them voiced by and looking more or less like the people who play them on TV.3

It’s easy to see why Telltale courted HBO to land the Game of Thrones license. As in all of Telltale’s adventure games, the action is rudimentary, limited to quick-time events and occasional aiming combined with a button press. The real draw is the plot, which presents the player with a series of difficult decisions that affect events in subsequent episodes (though the player’s influence is often oversold). For all of its violence, incest, and insistence that words are wind, Game of Thrones takes dialogue and diplomacy seriously, and so does Iron From Ice. Verbally sparring with Cersei and Tyrion as a timer ticked down, aware that whatever option I chose wouldn’t get me on Cersei’s sliver of a good side, left me clutching the controller as tightly as I would in a game more focused on combat. 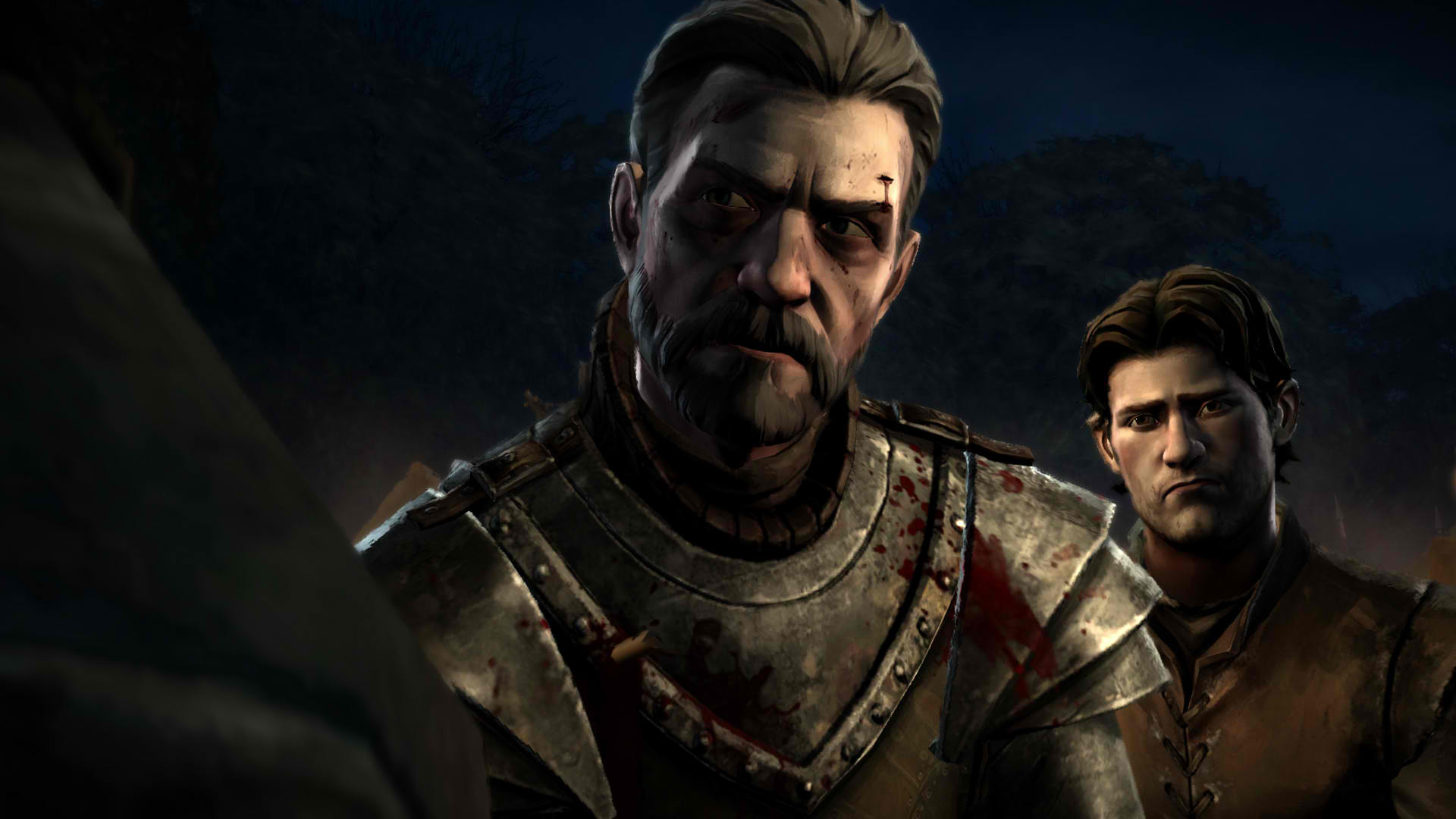 Through no fault of Telltale’s, Iron From Ice doesn’t exceed expectations in the way that the first season of the developer’s Walking Dead adaptation did. It’s not just that Telltale has already set the bar so high for episodic series, or that Iron From Ice follows a similar formula; it’s that the source material is much stronger. The video-game version of The Walking Dead gave us the strong characterization and genuine, emotional moments so often missing from the AMC series. Iron From Ice simply delivers the same strong writing, plot twists, and English accents that we’re accustomed to getting from Game of Thrones. Of course, that’s no small feat — attempts to digitize the series4 have failed before — and there’s still plenty of time for Telltale to transcend the series’ roots. Iron From Ice is only the first salvo in a six-episode “season,” and in addition to ending with a vintage Thrones moment, the episode dispatches the Forresters in enough directions to suggest that the story’s scope will expand.

Convincing presentation sealed the HBO adaptation’s success, but Iron From Ice’s visuals alternate between bland and borderline disruptive. Even on new consoles,5 which have the hardware to handle much greater graphical loads, the game suffers from a serious lack of polish: Stationary objects flicker, cutscenes drop frames and begin and end abruptly, and the sound at the end of sentences sometimes loops. Even when the game isn’t actively glitching, movement looks unnatural, and characters’ mouths don’t sync with their words. Telltale abandoned the cel-shaded design of its comic-inspired series in favor of a more painterly effect, and without a stylized veneer to distract us from its wrinkles, the engine shows its age.

I played Iron From Ice on Xbox One.

That’s not a new complaint, but sticking to tight release schedules while working on at least three series simultaneously has left Telltale little time to upgrade the guts of its games. It hasn’t helped that the company is committed to publishing its titles on as many platforms as possible, which leads to a lowest-common-denominator look. Telltale’s story-driven adventures would benefit from the detailed6 (and costly) facial animations that distinguished L.A. Noire and The Last of Us, but merely cutting back on the bugs would make for a more immersive experience.

Perhaps more seriously, there are times when the game’s story gets sloppy. At one point, Gared gets into a three-on-one fight to defend a fallen family member in which one adversary inevitably dies and a second goon gets away. Given the chance to decide the third assailant’s fate, I opted to spare him, and he fled on foot. In a cutscene seconds later, however, Gared declares, “I’ll kill the men who did this!” and subsequent scenes play out as if he’d slaughtered both soldiers, which saps the choice to save him of any significance. It’s not clear whether this is also a glitch or just jumbled writing, but it’s a jarring moment in a game that depends on maintaining the illusion that it’s putting the player in charge. Maybe Telltale didn’t count on someone playing Game of Thrones like a good guy.

With several months to go before Season 5 and many and more until The Winds of Winter, Iron From Ice and its sequels are your best bets for beating Tyrion withdrawal. The first chapter barely tweaks Telltale’s trademark approach, but what worked for The Walking Dead and The Wolf Among Us works almost as well for Westeros.