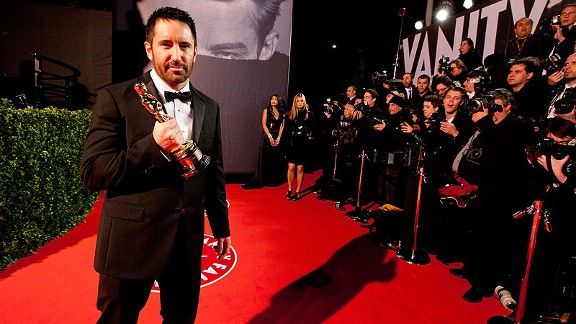 The Nine Inch Nails maestro announced on Twitter that he and Atticus Ross will tackle Gone Girl, their third Fincher film together. The Social Network was Reznor’s first time composing for the big screen and it won him and Ross an Oscar and a Golden Globe. The duo were also nominated for a Golden Globe for The Girl With the Dragon Tattoo. Guessing it’s a safe bet this new one will be dark and ominous.

I’ve been having nightmares about Maleficent since the first trailer came out. Now I can have new nightmares!

Wait, people are still actively working to make The Dark Tower happen? Nice! Says Aaron Paul, who has expressed interest in playing Eddie Dean: “I’ve had a ton of meetings on that. I just had a general sit down with Ron Howard, who is a huge fan of [Breaking Bad], which is such a crazy thing to even think that Ron Howard even knows who I am. They’re definitely planning on making it.”

Bradley Cooper will star in The Elephant Man on Broadway this fall. “The play, unlike the film, has the leading actor suggest deformity through physicality without the aid of makeup or prosthetics, so you’ll get to see Cooper in all his golden-boy glory,” EW writes.

Kreayshawn earned one cent in royalties for her debut album.

Here’s another breathless trailer for The Raid 2, plus this information: The movie’s team “spends three months in preparation for the stunt scenes … Then after casting their actors, they spend another three months in rehearsals to have each punch, kick, and flip perfected before the cameras even roll.”

Want to see a batch of photos from Rob Lowe and Rashida Jones’s final episode of Parks and Recreation?

Beyoncé’s battle plan for her surprise album, per super-involved mystery producer Boots, was that “this shit has to knock harder than any rap album out there.”

We all have a tech fanboy or fangal in our lives. Now we can read this and understand how they tick/sync.

Angel Haze explained why she leaked her own album and forced her label to bump up the release by three months: “I do think more people should rebel against the music industry — if the machine doesn’t work for you, you break it and you fix it and you make it work for you instead. There are no other options aside from getting fucked — and I don’t think many people want that.”

And maybe we’re actually getting Outkast solo albums? Hard to stay on top of this situation.