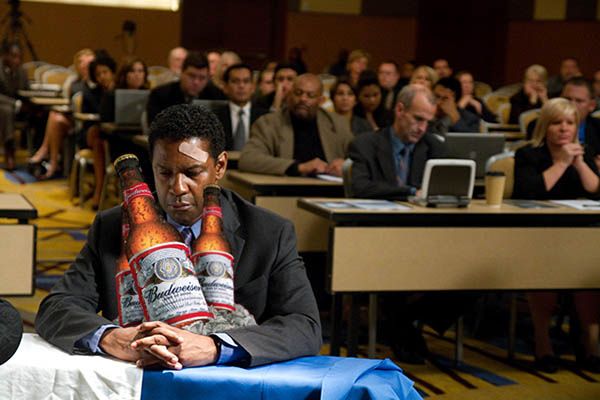 So Anheuser-Busch has officially requested that Paramount — the studio behind Flight, Denzel Washington’s high-flying (get it???) drama — digitally remove all Budweiser products from the film. Why fight free advertising? Well, see, the movie has a bunch of scenes in which Washington’s character, the hero pilot with a drinking problem, crushes a few frosty Bud brews, and AB would much rather not be associated with alcoholism. Sensible! In a letter, Budweiser vice-president Robert McCarthy writes: “We would never condone the misuse of our products, and have a long history of promoting responsible drinking and preventing drunk driving. It is disappointing that Image Movers, the production company, and Paramount chose to use one of our brands in this manner. We have asked the studio to obscure the Budweiser trademark in current digital copies of the movie and on all subsequent adaptations of the film.” But obscuring the trademark won’t mean audiences won’t still recognize that iconic red-and-white can — damn those centuries of effective branding! And, considering this letter of Robert’s is getting a nice little pile of news attention, everyone is going to know it’s Bud underneath those pixelated blobs. Surely Paramount doesn’t want to lose the friendship of the powerful AB corporation. So how can Denzel and Flight really make it up to Bud? Three suggestions:

1. Digitally replace all Budweiser with Coors Light and/or Miller Lite. What a way to ding the competition! And if Paramount wants to throw in a new line of dialogue from Denzel about how those Vented Wide Mouth/Punch Top cans are total BS, yeah, sure, why not.

2. Digitally replace all Budweiser with heroin. Instead of having Denzel sipping Buds, have him doing heroin. Everyone knows heroin is horrible. Even the National Heroin Processors Board would have a tough time objecting to this one.

3. Keep the Budweiser in the movie, but make Denzel shoot a Budweiser commercial that runs at exactly the halfway point of every screening of Flight and is also in the DVD/VOD/Netflix version. Maybe he’s riding a Clydesdale around? Maybe he’s one of the “wassup” guys? Who knows?! Have fun with it, Anheuser-Busch!