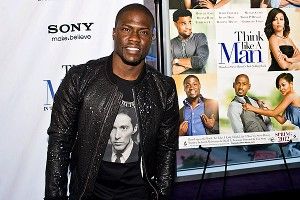 For the first time since it hit theaters a month back, The Hunger Games has not won the weekend box office. In a surprising development, the honor has gone instead to Sony Pictures’ ensemble romantic comedy Think Like a Man, an adaptation of Steve Harvey’s best-selling self-help book. The flick finished in the vicinity of $33 million, doubling its own studio’s predictions for how it would do. How did Think pull off the upset? As Deadline’s Nikki Finke reports, along with the all-important qualification of people actually liking the movie (it nabbed an “A” audience CinemaScore), there was a storm of promotion brewing behind it: “Knowing that the story skewed towards women, the studio’s marketing strived to position the movie from a male point of view while not turning off the female audience. The trailer debuted with New Year’s Eve, and it also ran with The Vow, Tyler Perry’s Good Deeds, and Red Tails. The usual high-profile sports games were employed, as well as a ’Behind The NBA’ promotion featuring Kevin Hart, Charles Barkley, Ernie Johnson, and [Kenny] Smith. The film took advantage of a lot of radio cross-promotion, including screening programs and flyaway promotions. It also took over [Steve] Harvey’s morning show during the first week of April.”

Analyzing that information myself, though, has derived a possible alternate conclusion. The truth is, most of these tactics — having the trailer run with a bunch of dissimilar movies, working in big name athlete promotions, relying on the popularity of the source material — have been tried before, with varying results. But what one tactic here is brand new? As far as I can tell, no one has ever tried selling a movie by utilizing the promotional power of Inside the NBA‘s long-serving anchor Ernie Johnson before. This may well have been the difference maker here, and why wouldn’t it be? On Inside the NBA EJ is mild-mannered, professional, glad to cede the spotlight to the more entertaining Chuck and Kenny but still always quick with a retort. Above all he’s a reasonable, straight-shooting guy; if he’s into a movie, one could imagine he’s not bullshitting you. By the way Hunger Games didn’t do all that poorly this week, as its latest haul has broken it into the Top 20 domestic grossing films of all time. If its studio Lionsgate really wants to make sure the money keeps flowing, though, they should maybe consider giving Ernie a call?