Remember that strangely warm-but-cool, hard-but-soft, Northeast-but-Southwesterly breeze that we felt on August 21? And remember how, while taking us all by surprise, we all had our speculations about what it was? And then later in the day, when we all spoke, realizing our collective hunch was correct — that it wasn’t a breeze at all, but the Twitter account of the jailed rapper Gucci Mane alerting the world to his new account on LinkedIn? 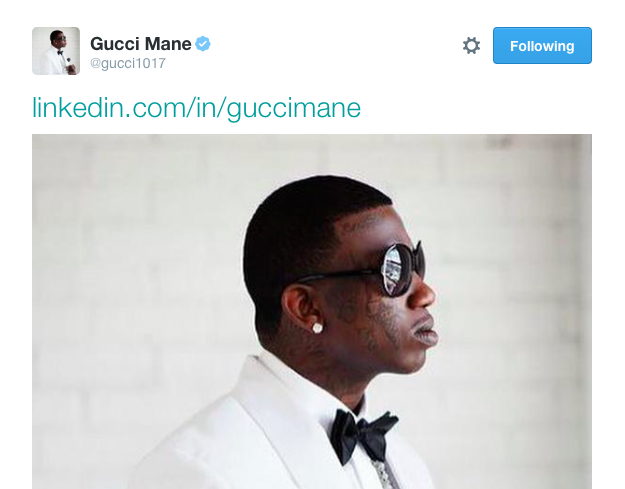 This was a major moment for me. Gucci Mane La Flare and LinkedIn, two of my most unlikely passions, joining forces for good.

To state the obvious: LinkedIn is the only non-garbage social medium. On the surface, it’s intimidating, lacks social skills, and drips with a sense of “this isn’t meant to be fun.” But then you get all up in that LinkedIn world and you realize how wrong you were. And then you remember LinkedIn is French for “positivity.”

When I go on Twitter, I’m simply logging on to be angry, to watch people be angry, or to suddenly become angry because people aren’t angry enough. Thefacebook.com is just the place to go when I need a strong #TBT from 2006. Instagram was pretty wonderful until people realized they could start ’gramming their tweets, thereby puncturing the happiness vacuum. And Snapchat: I don’t really use it because I’m an adult.

What you’re left with is LinkedIn. And what a blessing it is.

What happens when you log on to LinkedIn? You’re greeted with your timeline, one that is filled with joy. It’s not like Facebook, where the updates are like: “Bryce Bryerson says: ‘I hate my job, this blows, get me TF outta here #smh Karen gotta GO.'”

It’s always, “Bryce Bryerson just got a promotion, CONGRATULATE HIM.” Because it’s LinkedIn. And LinkedIn is German for “smiley face.”

After Bryce’s update, you see, “Tom Tomlinson got a new job — AND IT’S BETTER THAN THE LAST ONE, DAP HIM UP.” And then, “Shayla Sharonson is now the PROJECT MANAGER, A JOB SHE HAS WANTED FOR A LONG TIME, SEND HER A TEQUILA SHOT.”

I go on LinkedIn and can’t contain my excitement for humanity, for my dear professional connections. And let the record show that I’m not just saying this because of my relationship with the company.

I truly love it. And I think that loving environment is exactly what Gucci Mane needs.

The reason Gucci is on LinkedIn is to promote his new film, The Spot, to be strategically released on October 17 — also known as 10/17, a reference to his company, 1017 Brick Squad Records, of which he is CEO.

During my meteoric rise to self-designated LinkedIn CEO, I’ve learned so much about managing, talent-scouting, and the overall concept of freedom from Gucci Mane. And now that he’s on LinkedIn — my world — I figured giving him some advice was the least I could do.

Before I did that, however, we had to connect.

This is a great start for Gucci. “Entertainer/Actor/CEO” will make him stand out among his peers. And while the “Current” box is filled in, look at all that blank space. This is classic Gucci, modest Gucci. Talk about your previous work, La Flare. Your current situation is impressive, but your past is what truly separates yourself from the pack. Don’t be shy. This is your opportunity to stunt, if you will. The same way you’re doing it in that white tuxedo, I need you to do it with your words. 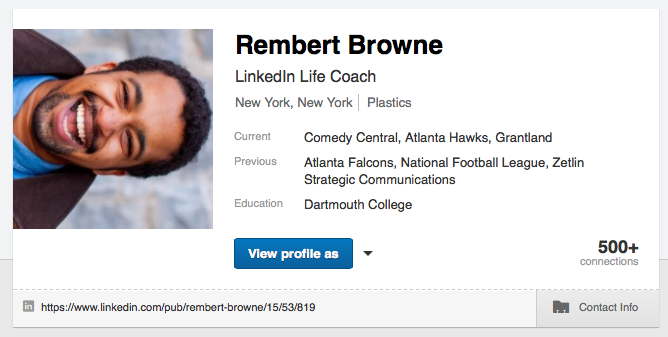 When we went to connect, I was presented with a pickle. When you connect with someone on LinkedIn, you have to state how you know the person. Obviously — as is the case with all parts of LinkedIn — you can just make everything up. But I wanted to keep it real. Because this was Gucci after all, the Alpha and the Omega of the Real.

So I answered honestly with, “I don’t know Gucci.” 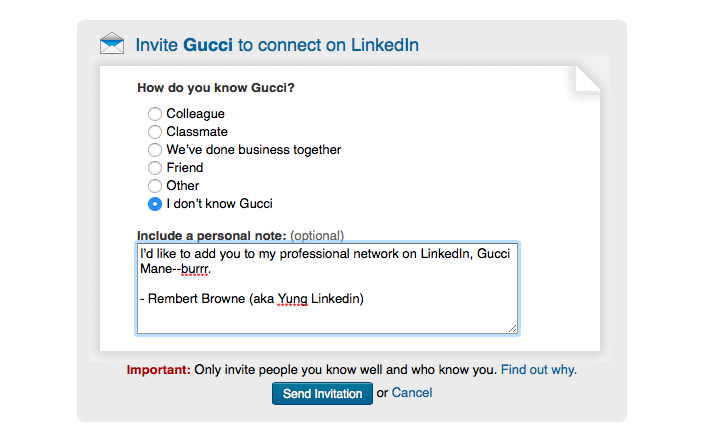 I figured this would take me to the next level of our relationship. I was wrong.

How funny a moment: The security systems I put in place as CEO were now coming back to haunt me. 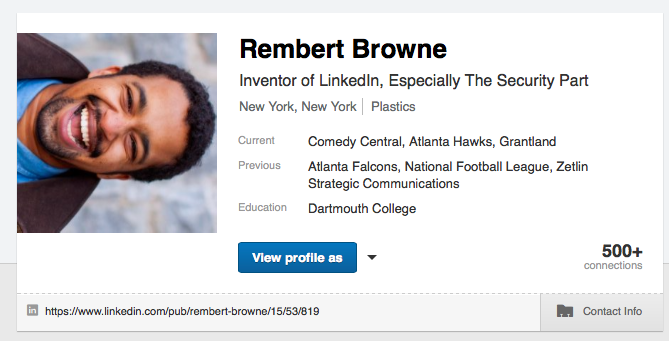 So I went back. And slightly fudged the truth. I went with “We’ve Done Business Together.” When you’re prompted with that, however, you have to explain what type of business you’ve done together. Jeez, this was complicated. But it was all worth it. Because I wanted the best for Gucci. 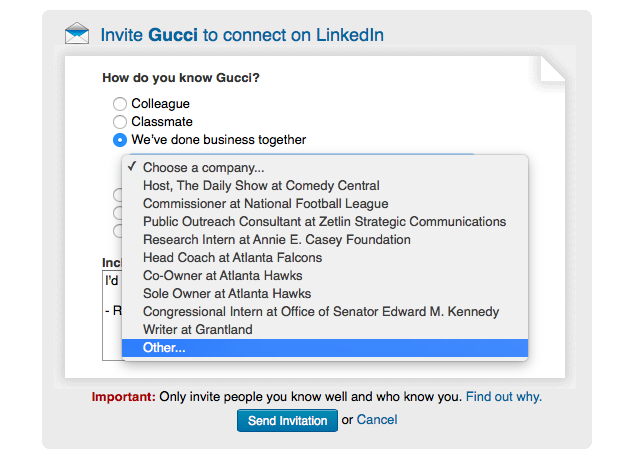 Wanting to still stay as honest as possible, I picked “Other,” which, wouldn’t you know it, led me to another set of options. 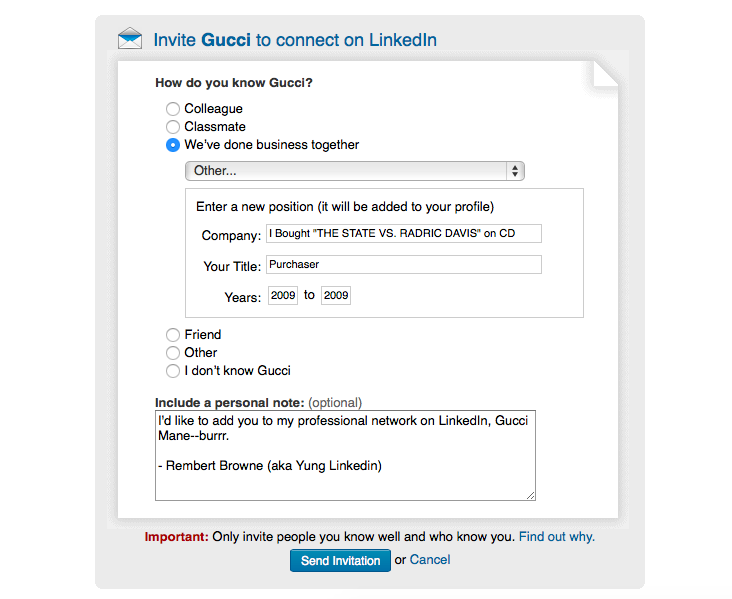 At that moment, everything was filled out. And just like that, “Send Invitation.” Finally, it was done.

Now that the connection was made, I could focus on my true mission: his profile.

This my tenth year in the industry and I am proud to be able to share my first movie ever that I executive produced and starred in on October 17th 2015. This is a great way to commemorate my ten year anniversary and I want my fans to experience this with me and help me think of the most daring and expansive way possible to bring this film to the world. I want cutting edge ideas nothing is too risky, I love the unorthodox. Burrr.

Gucci’s is a top-10 background section. He begins with facts, gets vulnerable, invites you in, gets you excited, and then says “burrr.” I don’t know who wrote this, but my first guess is either Gucci Mane or James Baldwin.

After this, Gucci’s experience section:

This my tenth year in the industry and I am proud to be able to share my first ever movie that I executive produced and starred in on October 17th 2015. This is a great way to commemorate my ten year anniversary and I want my fans to experience this with me and help me think of the most daring and expansive way possible to bring this film to the world. I want cutting edge ideas nothing is too risky, I love the unorthodox. Burrr.

Come on, Gucci. That section is good, but it’s not that good. You’re better than that. You can’t just CTRL-C and CTRL-V your way through life; that’s what got you in jail in the first place. We’ve talked about that. You have so much experience that the public is dying to know about, or at the very least be reminded of. Take advantage of this opportunity.

Next, “Languages.” Gucci picked “English.” Solid. You nailed it.

This is fine, Gucci. Yes, you have now told us about The Spot for a fifth time, but that’s not the issue. If you want to take this endeavor seriously, you have to get the director, Mr. BoomTown, on LinkedIn.

There’s no “I” in LinkedIn, Gucci. It takes a village to fully complete an online profile with the sole purpose of promoting a movie, and how do you expect to succeed without the support of Mr. BoomTown?

I know what Mr. BoomTown looks like. I could pick him out of a crowd. But not everyone is as privileged as I am. And right now this is who the public thinks is directing your film: 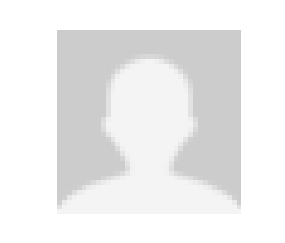 That’s not what success looks like. Talk to Mr. BoomTown. Yesterday.

And just like that, we’ve come to the end of Gucci’s profile. I’ve said it once, but I’ll say it again: Don’t fall victim to your own modesty, Gucci. There are so many other categories that you can use to promote yourself and your film. You said it yourself: “I want cutting edge ideas nothing is too risky, I love the unorthodox. Burrr.” If you truly love the unorthodox burrr, then you will take advantage of all that LinkedIn has to offer.

You know who else loves the unorthodox burrr? I do.

That’s why I’m here: to help you unlock your true unorthodox burrr. Gucci, look at what you can do if you put your mind to it. 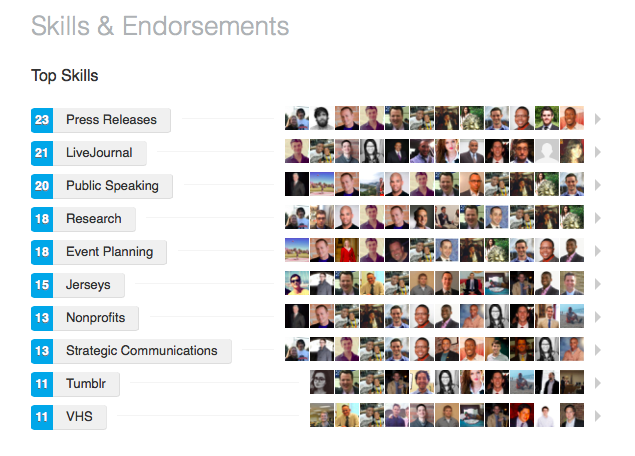 How do you think I got this job at Grantland? Whatever romanticized story you’ve heard me tell, it’s not true. Fifteen jersey recommendations, coupled with 11 VHS supporters — that’s how you trick Disney into paying you.

And it doesn’t have to stop there.

It’s LinkedIn, Gucci. You can do and say anything. I promise.

And speaking of doing and saying anything, I’ll never forget the moment when you said this, on that Soulja Boy song “Gucci Bandana”:

Gucci Badanna
Call me Gucci Montana
Gucci girl with me
Gucci bag
Gucci sandles
She too hot to handle
Hot sex, burning candles
Gucci Mane La Flare
Gucci shopping this extravagent
Gucci Mane drive a drop top red phantom
And my bed got them super size Gucci spreads
Pull up to the hood
Stop and let them jock Gucci
Broads jock Gucci, cause Gucci, just Gucci
Yeah my boxer briefs
Equipped with double G’s
Gucci key chain
Holding for my Gucci keys
Gucci down all the time in the summer time
I’m Gucci Mane
You would think that was my clothing line
GUCCI

That’s the do-and-say-anything Gucci Mane I know. Let this Gucci Mane shine in the world of professional connections. Right now, you may think you’re the one that really needs LinkedIn, but let me be the first to state the obvious:

LinkedIn is the real winner, because now it’s got Gucci.