Post-Thanksgiving Drama of the Week: Kim and Kanye, Nick and Mariah

We’ve been conditioned to expect Thanksgiving to usher in not only a retail frenzy, but also the unveiling of the Kardashian Khristmas Kard. This year, though, Kanye vetoed the endeavor. In Touch (via Radar Online) claims he nixed it because he wants to stage his own shoot with just Kim and North, but maybe there is a deeper rift. Kanye spent the holiday in Paris while Kim and North were at Khloe’s house. He was spotted eating at Ralph Lauren’s restaurant, so no one should ever question his commitment to the fashion scene. Kim tweeted that she was with her “whole family,” which is easy to interpret as some kind of message to us and her husband about where he stands with the clan. (And that would be on the outside.) But maybe she’s dumb and forgot about her man, or perhaps she blindly tweets out positive messages to maintain an image. The dark gossip Internet, which is not reliable, believes Thanksgiving separation is an indication they’re set to divorce. Celebrity Dirty Laundry claims that Kim cheated on Kanye with Tyrese in Dubai, and that she already made a secret visit to notorious L.A. divorce lawyer Laura Wasser. As with all celebrity marriages, truth and time will tell all.

Elsewhere in Los Angeles, a confirmed separated couple reunited. Mariah Carey and Nick Cannon celebrated the pilgrims together for the sake of their twins. According to TMZ, the Thanksgiving photos she shared on social media were taken at Nick’s house. There’s no coming reconciliation, though. She was supposed to pretape a performance of “All I Want for Christmas Is You” for NBC, but she missed the engagement because she was discussing her divorce with her lawyer. I imagine NBC was not pleased, but Mariah really came out the loser. She had to perform the song live during the broadcast, and she did not sound good. I’m fairly certain the greatest Christmastime catastrophe imaginable is Mariah botching this song. We’re only afforded so many weeks per year to play it, and Mariah undermining its integrity is just sad. Here’s hoping next week is better for her, and for us.

When our current era of blockbuster dawned, dressing in costume for the midnight showing of, say, Spider-Man or X2 or Star Wars: Episode II — Attack of the Clones was acceptable if not common. That was before nerd culture permeated pop culture, when Seth Cohen was a loser for attending San Diego Comic-Con. But this is 2014. We have more comic-book movies than we ever wanted and Comic-Con is a standard stop on a publicity junket. Dressing in costume for a blockbuster is neither for the nerds nor the cool kids; it’s passé. Apparently Jaden Smith, son of Will, he of batshit insane interview fame, did not get the memo. According to The Hollywood Reporter, he attended a screening of Interstellar wearing an “authentic-looking space suit” and yelled out “That’s my man, Nolan!” The tragedy here is that no one has photos of the incident. If you read the New York Times interview, it’s hardly surprising that Jaden would fervently support a movie that [spoiler alert!] culminates with a five-dimensional library that both defies and strictly obeys the laws of gravity. I wouldn’t have guessed that Jaden already owned a space suit (though I also would not have ruled it out), but the truly far-fetched idea is that he was shouting at a movie. Jaden seemed more withdrawn to me, but what do I know? I’ve not harnessed any prana energy to date.

The Victoria’s Secret Fashion Show has been a television event for 14 years now. It first aired on TV in 2001, and it was hosted by … Rupert Everett?! At this point, it’s a vehicle for publicity and a platform for pop stars. The 2014 version was filmed this week, and it included performances from Taylor Swift, Ed Sheeran, and Ariana Grande, who had a mishap. Model Elsa Hosk’s unwieldy angel wings smacked Grande in the face, mid-performance. Have we just witnessed some kind of bug in the system? 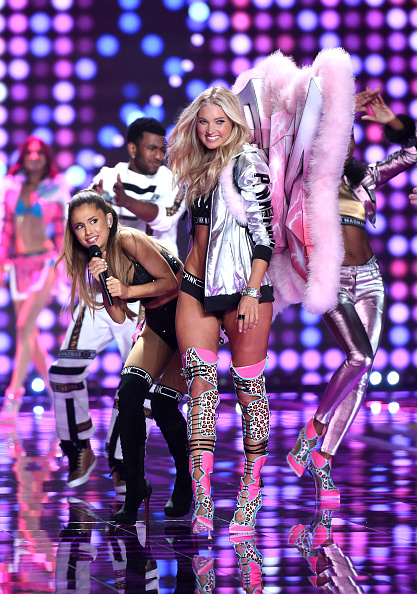 Grande recovered from the incident in Swift’s arms. While Swift may seem all cuddly here, she truly is a nightmare dressed as a daydream. According to the New York Daily News, she had Australian model Jessica Hart banned because of disparaging remarks Hart made following last year’s show. Hart said, “God bless her (Taylor Swift’s) heart. I think she’s great. But I don’t know, to me, she didn’t fit. I don’t know if I should say that.” Considering that previous performers include the libido-powered Justin Timberlake circa FutureSex/LoveSounds, Bruno Mars and his sexy band, and pubescent Justin Bieber, Hart may have been alluding to Swift’s comparative lack of sexuality. The real moral of the story, though, is never, ever cross Taylor Swift. Everything she says about herself in “Blank Space” is probably true.

Reality TV Wedding of the Week: Snooki and Jionni

Is Nicole “Snooki” Polizzi still famous? After last weekend, that’s not even her name anymore. She’s now Nicole “Snooki” LaValle, wife of Jionni, who you may recall from the later seasons of the show. They married in Garfield, New Jersey, and had a Great Gatsby–themed wedding. (I’m assuming inspiration came from Baz Luhrmann and not F. Scott Fitzgerald.) Jersey Shore best friends JWoww, Sammi, and Deena were all bridesmaids, while Ronnie and DJ Pauly D also attended. Neither Situation nor Vinny was there (as far as I can tell from Instagram photos), probably because both have hooked up with Snooki — and because everyone hates the Sitch.

Based on all reports, it was an event infused with joy and a lot of alcohol. Snooki said on her podcast (via Us Weekly) that she drank vodka beforehand to calm herself down. Fair enough. And even after the eight-hour affair that included the ceremony, the reception, and an after-party, the fog of alcohol carried over to Monday when Jionni went to court. He pled guilty to a DUI he committed on August 7. Was there really no way to move the court date? Entering a guilty plea is not traditionally part of any nuptial postmortem.

Idyllic Honeymoon of the Week: Solange Knowles and Alan Ferguson

Solange’s Internet takeover continues apace this week. She and new husband Alan Ferguson honeymooned in Brazil, and if her Instagram is a faithful record, it was a dreamy vacation. Coincidentally (or not), the honeymoon pics more or less match the line of Puma sneakers she worked on. I’m assuming she learned the ins and outs of successful branding from her sister.