Celebrities endear themselves to us by seeming like regular people. Stars, they’re just like us! That’s why photos of Jennifer Garner and Reese Witherspoon wearing exercise clothes, holding a Starbucks cup, or merely spending time with their kids are fascinating. They are a reminder that most celebrities start out as ordinary folks, and that maybe their lives are not that different now. But you know whose life is not just like ours? Chris Brown’s. This week, TMZ uncovered that he is a dad. He does not live the same life as other 25-year-olds.

Chris Brown has a 9-month-old daughter. Her name is Royalty, which means she is destined to be friends with Kourtney Kardashian’s kid, Reign. The mother is a model-friend of C.B.’s named Nia Amey. She is 31, making her six years older than Brown. All of TMZ’s meticulous reports indicate that Amey and Brown’s relationship is quite amicable, and that he’s happy to be a father. This is all rather hard to swallow, considering that his longtime girlfriend Karrueche Tran didn’t even know about the child until TMZ broke the story. This leads me to believe that Brown was not spending enough time with his daughter, or even talking to her often enough on the phone, for his girlfriend to ask, “Hey, where have you been?” or “Hey, who are you talking to?”

I’m sure Tran gave up accounting for all of her ex’s time a long time ago — keeping up with any pop star’s schedule is difficult — but one must assume that, typically, the birth of one’s daughter would foster a shift in agenda. Maybe Brown decided not to tell Tran because Tran knows the mom. Maybe Brown didn’t want to have to explain how and why he’d cheated on his girl with someone she knows. That’s understandable, I guess.

Kudos to Tran. She decided to dissociate from this one with a wonderful Twitter mic drop. To use his own parlance: Deuces!

Listen. One can only take so much. The best of luck to Chris and his family. No baby drama for me. 👶 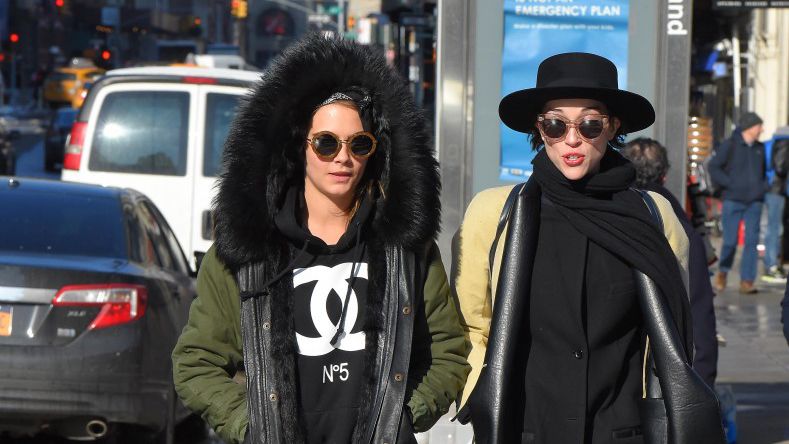 We’re getting a lot of Cara Delevingne these days! She’s no longer relegated to the British press as a socialite turned model. She’s a bona fide celebrity to the English-speaking world, thanks to high-profile campaigns with companies like Burberry and all of the attendant magazine covers. What’s the next step in the celebrity protocol after entering the general consciousness? Proving your hipster cred, of course! First she “costarred” in this delightful A$AP Ferg video, “Dope Walk.”

(Next, Cara should release her own video featuring her own take on the dance.)

And now she’s rumored to be entangled with singer St. Vincent, a.k.a. Annie Clark. They were seen together at Brit Awards after-parties, and in New York, “[sneaking] off to the bathroom during dinner” and slow-dancing at a Queen of the Night performance. Stealth tandem trips to a bathroom during dinner rarely indicate true love, but they sure do imply some kind of fun. I wish these two well.

I’m sure you’ve been wondering how the saga of Conrad Hilton’s airplane shenanigans would resolve itself. And now we have an answer! He is pleading guilty to “misdemeanor assault against flight attendants in exchange for a federal felony charge being dropped,” according to CNN. GQ tracked down a passenger from the flight and got some key details. She described Hilton as “monstrous” and “inhuman,” and he appears to have offended her British sense of propriety: “There are rules — social rules — on a plane.” Meanwhile, the court documents reveal Hilton’s predilection for threatening to own people. Typical rich-kid threat. I think he could have gotten more creative.

This episode has me wondering: When will the Kardashians become marginalized enough that a petty incident like this will capture any kind of collective imagination? I look forward to that day, because it means we’ll be on the other side of the Kardashian empire — the decline. Rob is the top choice for “most likely to threaten human ownership,” but I think Kourtney is the dark horse. Years of Scott Disick and ranking third in the (OK, my) Kardashian Sister Power Rankings will haunt her.

Yesterday, The Hollywood Reporter ran a story suggesting that Amy Pascal’s move into a new office per her demotion was delayed because the residual aroma of Seth Rogen’s weed smoking deeply permeated the space. Rogen immediately took umbrage.

I don't know what's more irresponsible: that they would print a story that is completely untrue, or that they would refer to how pot smells as a "stench." #myshitssmellsgood

THR quotes an unnamed source saying, “Rogen and [Evan] Goldberg hadn’t been in the offices … long enough to cause permanent damage.” I’d like to take this one more step, though: How much time were they really spending in that office? A corporate suite on the Sony lot doesn’t sound like the type of space that inspires Neighbors or Superbad or the like. So, next question: Who at Sony is still pissed enough at Rogen and Goldberg to give this story traction? Just wondering.