It’s a beautiful, hot day in June, and Adrienne Maloof is sitting by the pool as her blurry-faced children and husband take turns doing cannonballs. This is what Adrienne Maloof’s life is like when she’s not pursuing legal action against her friends and designing purses for Kohl’s. She’s a normal lady who just happens to have some stone lions adorning her multitiered swimming pool. Everything is pretty much totally peaceful and normal … and then the choppers start circling.

“Adrienne? You smell smoke?” Paul shouts from inside. Her first thought is that Charlie’s up to his old tricks again, until she sees the huge sickly yellow plume rising up over the hedges. “Wait a minute, that’s a fire!” Paul says, his excitement uncontainable. “That’s a fire! That’s Lisa’s old house!”

The family stands on its front steps, gawking at the destructive force on the other side of their gate. Adrienne’s face is frozen in a disconnected half-grin as fire crews circle the house, like she’s watching a particularly gruesome YouTube home video.

“Oh my god, they can’t get in! Holy shit.” As it dawns on her that the people sent to turn off the fire aren’t going to be able to do it right away, a queasy feeling starts mingling with the two glasses of Sauvignon Blanc in her stomach. “The whole house is burning down,” she gasps. “Oh my god.”

The fire seems to have excited a manic glee in Paul that she hasn’t seen since he did her last eyelid lift. “Oh, they’re actually going in now,” he narrates like an overeager sports commentator. “Let’s look from the top.”

Adrienne is about to follow him in when she catches her first glimpse of the actual flames, red and angry, consuming the roof of the house. “Oh my god! Look at that!” She can’t look away from the fire; she hates the fire. The fire will break things, the fire could kill dogs or people. Fires are not supposed to happen in this neighborhood; she and everyone she associates with live in Beverly Hills to protect themselves from elemental realities. It’s not fair; why is she being made to think about death on a beautiful summer day?

“It’s getting worse, it’s not getting better,” she hears herself say.

She takes her little blurry children back to the driveway and piles them into the Escalade — the Bentley seems a little aesthetically inappropriate for an evacuation. Paul’s trailing behind her, shouting. “Adrienne, you can’t leave. The whole street’s blocked off.”

“I’m gonna try anyway,” she says. Escalades can drive through police barricades if need be, she tells herself. And if she doesn’t have to look at the fire anymore, then it’s worth it.

She climbs into the driver’s seat as Paul runs up to the car. “You can’t,” Paul insists, now standing in the way of her closing the door.

“I’m going anyway,” she says, wrestling the door free and slamming it, now blind with panic and behind the wheel of a car carrying four children. As she tears off down the driveway, she nearly hits Paul, leaning into the horn as he tries to block the car. Then she’s gone — out of sight down the street in a matter of seconds.

He jogs back in as the gates close. A siren whines in the distance. He slows to a walk, then turns back to look at the nearly destroyed house. Catching his breath, he holds up his iPhone and takes a few more pics, then opens Twitter to report the news.

“The house across the street from us is on fire,” he types, standing alone in the empty driveway. “All of us here are OK!” 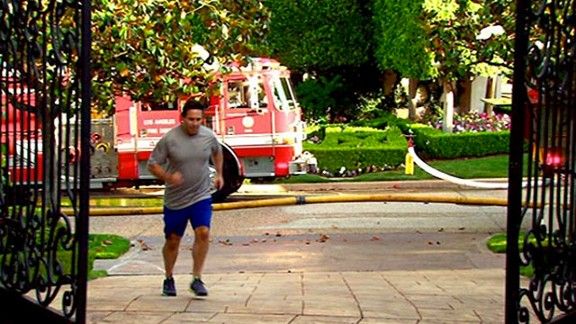