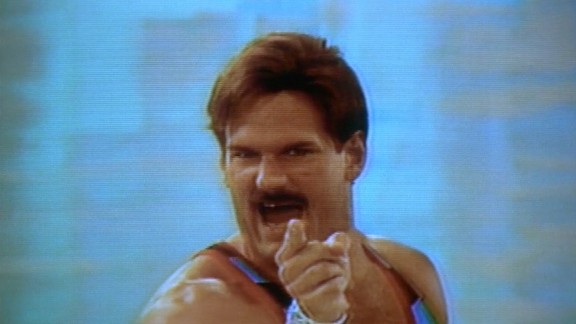 Premise (established): Legendary Stalker Captain Freedom (Jesse Ventura) puts viewers through their paces in a fun yet challenging exercise program!
Dystopian Elements: The host’s hair is so astoundingly fake that it can only be the horrific style of a hideous future. Also, in his other job the guy is a government-sanctioned assassin.
Contemporary Analogue: The Running Man (the movie) came after celebrities like Jane Fonda and Suzanne Somers started sharing their workouts with their civilian fans, but in our day, trainers have become celebrities in their own right — think of Jillian Michaels or Harley Pasternak. However, given that those people are not openly trying to kill anyone, the closest analogue to Captain Freedom’s Workout is probably Tony Horton’s legitimately murderous P90X.
https://www.youtube.com/v/tuGlpBedDxY?version=3&hl=en_US&rel=0 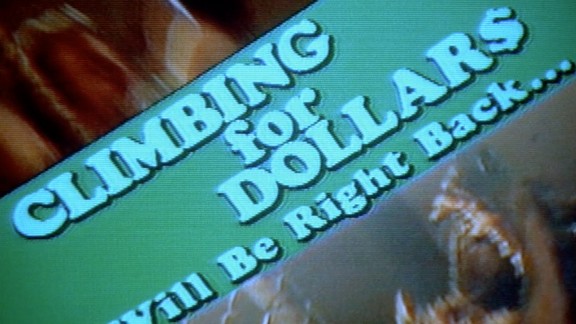 Premise (established): Thrill-seeking contestants prove their mettle by climbing a rope as quickly as possible away from a pack of bloodthirsty dogs!
Dystopian Elements: Just try to imagine what kind of abuse the show’s producers must subject these poor dogs to in order to make them so hungry for human flesh.
Contemporary Analogue: Facing terrifying situations in order to win money is only exactly what happens in every episode of Fear Factor that doesn’t involve the ingestion of animal semen.
https://www.youtube.com/v/EP5Bm9hjcu0?version=3&hl=en_US&rel=0 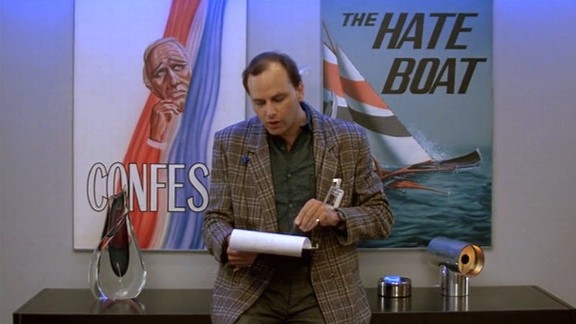 Premise (conjectural): Subjects who’ve been engaged in seditious activity attempt to plead for leniency by confessing before they are (inevitably) arrested!
Dystopian Elements: In the future, Americans will risk jail time for their reprehensible behavior, instead of being rewarded with millions of Twitter followers and AutoTuned parodies on YouTube.
Contemporary Analogue: Sharing one’s deepest, most embarrassing secrets with a national TV audience might have actually been the official log line for The Moment of Truth.
https://www.youtube.com/v/TGLdW5rjSCY?version=3&hl=en_US&rel=0 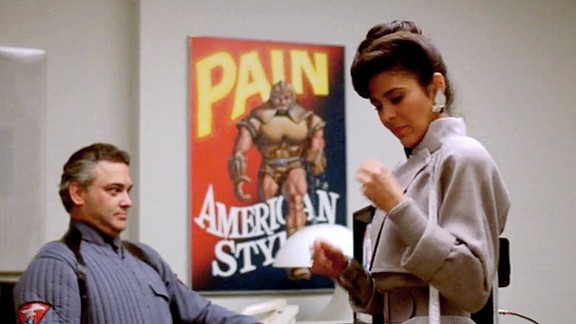 Premise (conjectural): Citizens challenge their physical limits with feats of strength and endurance! Think you can withstand waterboarding? Prove it, hot shot!
Dystopian Elements: The notion of subjecting ordinary people to physical harm for the enjoyment of a sadistic audience is barbaric, reprehensible …
Contemporary Analogue: … and the premise of Wipeout.
https://www.youtube.com/v/S5pJ1tAWQ8s?version=3&hl=en_US&rel=0 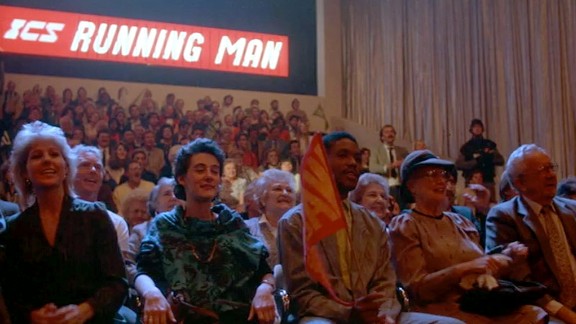 Premise (established): Convicts waive their prison sentences by gambling their lives in a contest opposite highly skilled assassins, with a chance to win their freedom! [INTERNAL MEMO: This is just a cover story for dumb audiences. Convicts who may seem to win their freedom will actually be burned alive, their corpses left — with ID tags still on them — in the basement of the broadcast facility, where no nosy outsiders would ever possibly find them.]
Dystopian Elements: Making criminals fight for their lives for viewers’ entertainment is appalling. Better they should be kept in solitary confinement 23 hours a day, where the rest of us can’t see them and think about what “cruel and unusual punishment” actually means, other than as fodder for all of MSNBC’s non-news programming.
Contemporary Analogue: Pitting a bunch of physically dominant cast members against weaker opponents in a series of athletic challenges that stop just short of mortal combat is known to our generation as American Gladiators. (South Korea actually does air a show called Running Man, though it pretty much sounds like The Amazing Race and no one gets killed in that one either. So far.)
https://www.youtube.com/v/Cnh94jU2q6I?version=3&hl=en_US&rel=0