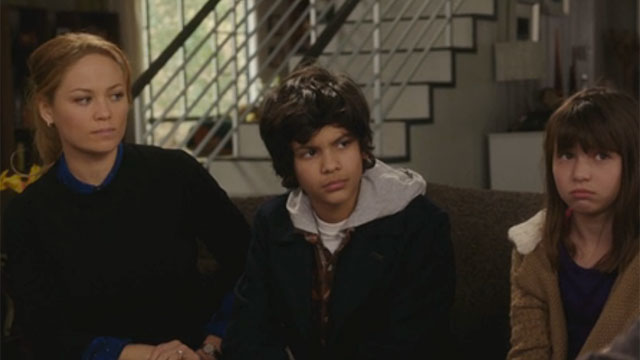 The first Parenthood sob-fest of 2K14 descended upon us Thursday night. After weeks of slowly watching Joel and Julia’s marriage unravel, he moved out and they talked to Victor and Sydney about it. The devastating turn of events signaled a return to form. I cried multiple times during this episode. Sydney said it best when she said, “No, you can’t do this. We’re a family. You can’t go!” I feel you, Syd.

Prepare the tissues, because you’ll be furious and sad
Don’t worry. This week’s episode wasn’t all divorce and tears. Kristina, not satisfied with her absurd and thematically boring mayoral campaign, thinks that she needs to open a school for Max. He doesn’t fit existing Bay Area schools, and now that Kristina has become an advocate for other special-needs kids, she’s more attuned to education failings than ever. Of course, the only option is to go the DIY school route. She begins by Googling “how to start a school,” which is how I assume all grand philosophers begin intellectual revolutions. She and Adam conclude that all they need is a building, some teachers, and “maybe a hot lunch program.” I think this short exchange undid the work of education advocates of the last hundred years. All you need is a mom with gumption, no degrees in special education necessary.

Prepare the tissues, because you’ll be overwhelmed with happiness
If there is any silver lining in the Joel-Julia separation, I think it may be that we will see more Braverman sibling action in the near future. This episode concluded with both Crosby (seeking refuge from his mold-infested house) and Julia returning to the homestead. Until Thursday night, she hadn’t told her parents about any of her marriage problems. And until Thursday night, I hadn’t considered any parallels between Joel and Julia’s marriage and the growing distance between Zeek and Camille. I wonder if the two relationships will inform each other, or if Julia will gravitate toward one of her parents. Her plight seems more aligned with Zeek, but the character may see it differently.

Cry Moment of the Week runner-up
There was really a trifecta of Julia moments that brought me to tears. The third-most upsetting moment was when she sat on her bed, asking Joel not to move out, pleading with him not to “give up” on her. This could have been the most devastating moment of the episode, but it sounded unfortunately similar to when Meredith Grey asked Derek Shepherd to “pick me, choose me, love me.” Sure, the tone was different, but the pacing and sentiment were the same. Although Meredith has evolved into a very likable surgeon/wife/mother (who, coincidentally also has one adopted child and one biological child), Season 2 Meredith is not someone to aspire to.

The second-most upsetting moment was when she began explaining what happened to Zeek and Camille. She crumbles into her mom’s arms, explaining, “I just wanted to come home.” This very brief exchange captures the emotional tenor that this recap (and recapper) wants and expects. The sentiment is simple. Who doesn’t want to retreat home when things go awry?

Cry Moment of the Week kill shot
When Sydney starts crying, we all start crying.

The separation has been building, and dragging, for 14 episodes. Easy, obvious plot devices never came to fruition — Joel never cheated on Julia, and Julia’s indiscretion was, by TV standards, rather mild. That narrative restraint from Parenthood is not surprising, but it has made this season feel slow. The main flaw in Joel and Julia’s trajectory is a lack of clarity on what exactly led to this point. There’s no one incident that precipitated their separation, though Julia kissing Ed certainly accelerated the arc. The lack of direct cause and effect is one of the most realistic aspects of this breakup — second to Sydney’s unfiltered reaction. When the kids know, it has to be real.