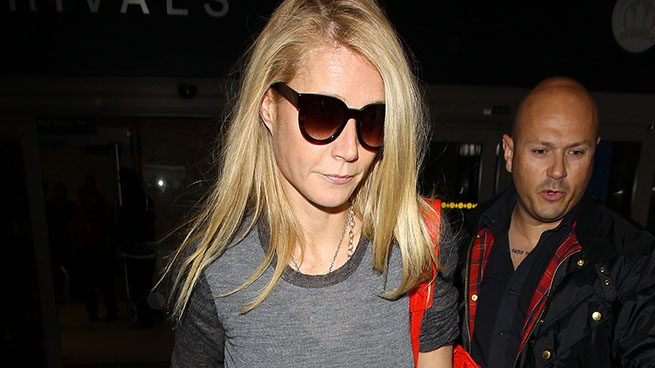 In an anticlimax to end all anticlimaxes, editor-in-chief Graydon Carter signed, sealed, didn’t quite deliver on the long, mostly speculative saga that has been Gwyneth Paltrow vs. Vanity Fair. Almost a year ago, in May 2013, word got out that the magazine may have been planning what was being called an “epic takedown” of the actress. This notion was drummed up mostly courtesy of Paltrow herself, who subsequently emailed all her famous friends urging them not to talk to the magazine or anyone associated with it. It seemed like Paltrow had something to hide, which in turn led one to believe that Vanity Fair was looking for that something. But late last year, word got out that Carter and Paltrow had “called a truce” and that the story would not be the smear it was originally rumored to be; perhaps it would not run at all.

The latter ended up being the case, as explained by Carter in his letter in this month’s Hollywood Issue of Vanity Fair, which was ostensibly published in lieu of the article. As he tells it, the story began with a casual idea brought up in an editorial meeting: “At one point I mentioned that I would be interested in reading something on Gwyneth Paltrow,” Carter says, citing her recent double-crowning as “World’s Most Beautiful Woman” (People) and “Most Hated Celebrity” (Star) as his reasoning. Vanessa Grigoriadis was assigned to the story, but quickly ran into the Iron Curtain of the Goop empire. Perhaps it was Vanity Fair’s recent rebrand as a glossy, high-end dirt digger that set off alarm bells for Paltrow, perhaps she really did have a big dark dirty secret to hide. Whatever the case, Grigoriadis filed what Carter calls “a reasoned, reported essay on the hate/love-fest that encircles Gwyneth Paltrow,” just as the rest of the media world was getting out its popcorn in eager anticipation of a bloody ritual slaughtering. Carter decided to hold the story for the time being, and he and Paltrow later patched things up in the course of a 20-minute phone call he recounts in the letter.

The gist of Carter’s letter is that the Paltrow story was never going to be as big a deal as the tabloids made it out to be, despite their recent rededication to meaty Hollywood investigation (such as Maureen Orth’s inside look at Tom & Katie’s Scientological love, and her controversial reexamination of the Woody Allen sexual-abuse allegations). Still, anything vaguely insightful about Paltrow’s strange and recently pronounced ability to incite ire, particularly among women, would have been an interesting turn for the magazine, which has historically treated Gwyneth as a holy avatar of the white Hollywood elite. You can start to see the softly inquisitive tone that the article might have taken when Carter recounts a conversation with his staff following his suggestion in the full letter.

A quick straw vote on Paltrow’s relative hatedness came down pretty evenly on both sides of the divide. Half the female staff admired her for creating a healthy family amid the maelstrom of modern-day celebrity—and with a handsome rock-star husband, no less. They thought she was a great actress who deserved the Academy Award she received for Shakespeare in Love. And they envied her abs, her legs, and the fact that she had built a business of being a lifestyle guru. The other half seemed to dislike her for pretty much the same reasons. Some had kind words for Goop, her Web site. Others criticized it both for its privileged Just get your butler to whip up a batch! tone and for what is perceived as a blatant, My life is better than yours thrust.

This is hardly the stuff of “epic takedowns,” but in the context of the relationship Paltrow has had with the magazine, it signals a change. Gwyneth has historically been a VF darling, appearing on the cover five times. In the ’90s, stars like Paltrow depended on high-profile magazines like Vanity Fair to keep their star shining, via glamorous photo spreads and puffy profiles, and the magazine depended on the celebrities to move copies. In the last decade, that equation has tilted dramatically — stars can do their own casual PR through Twitter, and print media, so I’ve heard, is not in the best of shape. Now, rather than selling the cooperation between a star and a journalist/photographer, magazines will often opt to sell a more antagonistic relationship.

What’s more interesting is that the story got so blown up to begin with. Once the gossip rags got wind of the Gwyneth lockdown, their collective imaginations started going wild, speculating that the article could focus on anything from infidelity to secret occasional cigarettes. Why did we care so much about such run-of-the-mill vices? Why does the Goop get under our flaky, toxin-filled skin so badly that we need to continue to laser it away? Carter points out that Paltrow’s much-maligned lifestyle brand is hardly more out of touch about the average incomes of American women than any number of magazines, but we shrug our shoulders and give fellow Condé Nast rag Vogue a pass for all sorts of things out of a sense of old-media tradition, while mocking Gwyneth for daring to show us what a Valentino iPad case looks like. The difference is that Vogue, by now, is more a willfully detached state of mind than anything else, and Gwyneth is a person with behaviors and tics we can track and pretend to understand enough to criticize.

Vanity Fair’s decision to not run the story is a little puzzling. Carter’s letter is easy to read as apologetic that he wasn’t able to deliver the juicy goop the rest of the media had promised us. It certainly wasn’t held to spare Paltrow’s feelings. But in the end, I still don’t know what could shock us when it comes to Goop. Gwyneth Paltrow has some bad qualities and probably isn’t a very chill hang? She cheated on her spouse? Sorry, you’re still describing 75 percent of Hollywood. Maybe the recent Woody Allen mess has desensitized me, but it all seems like very small heirloom potatoes.