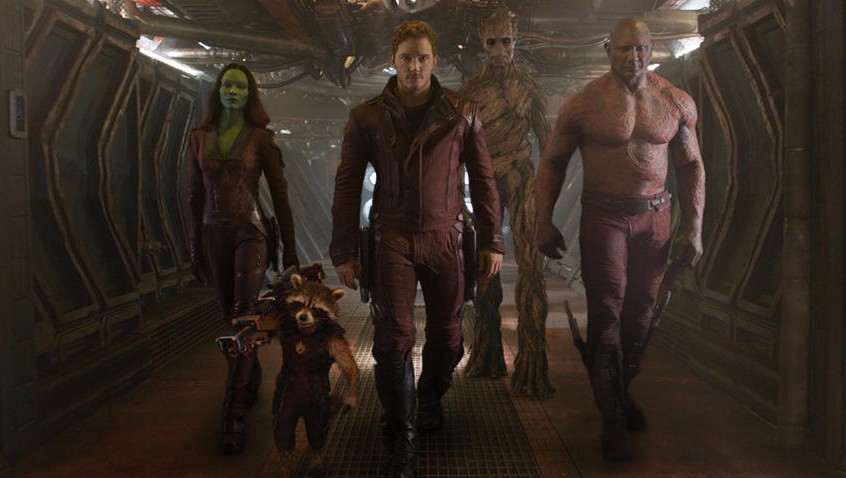 In his valiant attempt to beat back the nuclear adorability of Jimmy Fallon taking over The Tonight Show, Jimmy Kimmel let loose the hounds of fanboy war last night with the world premiere of the Guardians of the Galaxy trailer. I don’t know about you, but the Marvel Universe long ago left me bobbing in its all-conquering wake. I was already scraping the bottom of my comic-book-knowledge barrel with that Benicio Del Toro teaser at the end of Thor: The Dark World. But judging from Chris Pratt’s whimsically innocent eyes and Han Solo charisma here, Marvel will be taking my money for a long time to come.

Honestly, the only thing I knew about Guardians of the Galaxy before this was that Bradley Cooper would be playing a talking raccoon, with Vin Diesel voicing a CGI tree — a deciduous Sundance to Cooper’s garbage-can-scavenging Butch. My imagination was awash with mental images of Richie DiMaso battling King Koopa in a Tanooki suit while Swamp Thing drifts across L.A.’s Sixth Street bridge in a modified Honda Civic. And trying to educate myself via the Internet was hopeless: The Wikipedia pages on the Guardians proved only slightly less convoluted and headache-inducing than the ones on the topology of symplectic manifolds. Even Stan Lee claims not to remember who these guys are.

So, I was all set and ready to resent Marvel’s Ultimate Fanboy CEO Kevin Feige for not only forcing me into another 3-D IMAX theater this summer, but actually doing it by means of a talking raccoon. But I have to admit, the trailer worked. Wisely, Marvel riffed on our collective confusion as to why exactly Andy Dwyer would make the perfect Star-Lord, allowing us to identify with that epitome of the skeptical everyman, John C. Reilly, as he introduced Peter Quill, Drax the Destroyer, Gamora, Groot, and Rocket. From Djimon Hounsou’s perfectly perplexed “Who?” to Blue Swede’s “Hooked on a Feeling,” this trailer hit all the necessary notes for a movie trying to introduce a cosmic-gun-toting raccoon and intergalactic man-child as the next multibajillion-dollar franchise. It’s a sign of Marvel’s confidence that Academy Award winner Del Toro occupies fewer than 15 seizure-inducing frames in the whole thing. Cooper didn’t even say anything.

I guess I shouldn’t be totally surprised — director James Gunn’s Slither was twisted, demented fun; if anyone deserved a sick budget to play around with obscure Marvel Universe characters in a movie that really has nothing to lose, it was him. At this rate, Phase 3 in Marvel’s vaunted plan for cinematic domination could consist of Tom Hiddleston singing J-Pop hits and I’d give them the benefit of the doubt. (Phase 1 being every film that introduced one of the principals in The Avengers; Phase 2 being this and all the current sequels up to Avengers: Age of Ultron. And Phase 3 being Feige green-lighting films based on dreams Lee had after a bad case of indigestion … OK, OK, I admit: I am looking forward to Edgar Wright’s Ant-Man.) Until then, I’m just going to set up automatic withdrawal between Marvel and my bank. It’ll save us both a lot of trouble.