The Great Horror Campout is an interactive, overnight camping experience that promises to bring attendees “face-to-face (and closer) with their worst nightmares.” On Saturday, the event rolled through Los Angeles’s Griffith Park, and Grantland’s summer interns were there to report on the proceedings — nominally in the name of journalism; truthfully to entertain their editors. Against all odds, everyone managed to survive. This is their story.

Matt Borcas: The Great Horror Campout is essentially a collision of my two deepest fears — camping and horror movies — so I was a very reluctant participant. I went because it figured to be an excellent people-watching opportunity, and after seeing that Mark Cuban had invested in the company responsible for the event on Shark Tank, I was legitimately intrigued by the appeal of an outdoor torture chamber … as long as I could observe the festivities from afar. My strategy was to spend every waking moment in the safety zone, where campers could make arts and crafts, roast marshmallows, and generally avoid the truly bloodcurdling stuff. I realized this wouldn’t make for a particularly compelling blog post, but my only concern was survival.

I was singularly devoted to this plan, to the point where I didn’t even bother to pick up a map at orientation. Although the campground was divided into several ominously named regions that were filled with items for the haunted scavenger hunt, I was quite content to stay in “the safety zone.” I just had to get there first.

Alex Shultz: The buildup to the campout was a source of entertainment in the Grantland office. We studied Yelp reviews and listened to editors make jokes about whether they should’ve conferred with ESPN HR before buying our tickets. My mom studied the same Yelp reviews — when I told her it would be a good intern bonding experience, she texted me “so is getting dinner.” Touché, mom.

On the way to our destination, Mia and I were alerted to a tweet from a USC student who had gone to the same event the previous night. All I can say is it involved blood spewing from a mutant’s orifice after the student answered a trivia question incorrectly. When I showed the tweet to Borcas, his reaction was equal parts fear and disgust.

Apart from these fears, it is important to note that when anything jumps out at me I instinctively whack it in the face, which is likely why people have stopped throwing me surprise parties. Like my dancing ability and fashion sense, it is really just an ingrained defense mechanism that I use to deflect predators.

So when entering the campsite, which has a strict “no touching the actors” policy, I thought I would get kicked out for punching a Goat Man in the face. Either that or elect to leave at the first sign of arachnid and/or enclosed body of water.

Riley McAtee: You know what isn’t scary? PowerPoint presentations. The juxtaposition of the camp’s bloody headmaster using a slideshow to explain the rules did little to set the tone. Then the motorcycle-riding clowns came barreling toward us.

McAtee: The first section in the event’s liability waiver is called “Assumption of Inherent Risks.” It’s more than 1,000 words long. One of these inherent risks is literally “inadequate first aid.” Participants sign on with the expectation that the camp’s “creatures” will be able to “put sacks over their heads and bodies, to physically guide participants into small, dark spaces, to trap participants, to bind participants, and to simulate torture in various ways.” You agree to be hooded. You agree to be bound. You agree that the GHC “is a hazardous activity that presents the ultimate physical and mental challenge.” We entered this thing horrified.

And for the first hour, it was exactly what it sounds like. After orientation, we went to the tents and this sequence of events took place: A mostly naked bloody lady slimed me like I was on Nickelodeon, Matt got kidnapped, and I got lost in a labryinth. It was awesome.

Borcas: This was decidedly not my scene. I feel I need to make that clear before you judge me too harshly. The campers to our left appeared to have come directly from the Gathering of the Juggalos, while the ones to our right were on their sixth Great Horror Campout. Fortunately, I managed to convince my fellow interns to start in the safety zone. We needed to strategize together, and it made sense to do so in the one area that wasn’t overrun with slime-squirting zombies. Plus, once we were down there, surely they’d see the light and stay with me …

We were about 10 steps from freedom when an orc-like creature placed a bag over my head and dragged me into the forest. I begged him not to pour anything on me, because I rather liked the shirt I was wearing. He proceeded to douse me with an unidentified green substance anyway. (THESE GHOULS AIN’T LOYAL.) Then, what looked like a postapocalyptic V. Stiviano came out to sniff me for an uncomfortably long period of time, after which I was free to go. 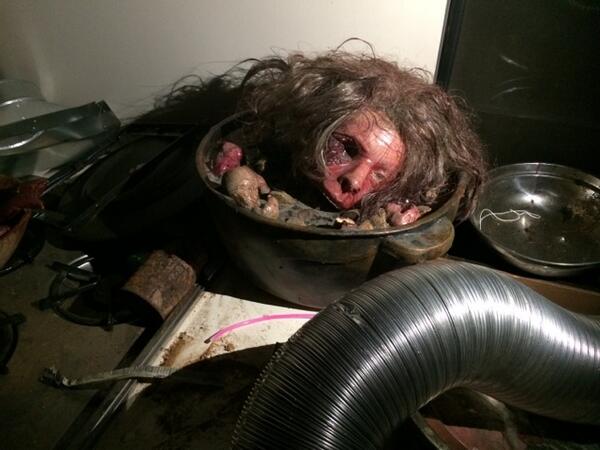 Galuppo: While I was on high alert for lake sharks, a scary guy snuck up behind our group, put a bag over Borcas’s head, and told us to go away. At the beginning of the night we were all like, “Guys, let’s stick together no matter what.” But now, without thinking twice, Riley, Alex, and I immediately booked it to The Labyrinth. We lost a lot that night. My sweatshirt and Borcas’s trust will definitely be counted among the more mourned-for casualties.

Shultz: The Labyrinth was the real-life version of the “Sneak ‘n’ Snore” mini game from Mario Party 2. Except instead of a half-asleep ball and chain, we were basically playing Red Light, Green Light against a horde of chupacabras.

We started as a pack, but while Matt, Mia, and I sneaked past the enemy, Riley sputtered behind at a snail’s pace. Eventually, the three of us reached the two living statues, whom were dressed like Jaden Smith at KimYe’s wedding. We knelt before them and gained passage to the Lords, who asked us to name our favorite pleasure. They wrote our choices in “blood” on our foreheads. It took Riley a solid 15 minutes to emerge from The Labyrinth afterward.

McAtee: In my defense, this one chupacabra decided to smell me for like five of those minutes.

McAtee: You know that feeling as a kid when you go to Disneyland and by mid-afternoon your feet start to hurt and you look forward to the rides not for the magic but for the chance just to sit down? That was this part of the night: We were exhausted.

After a few hours we were actively (and unsuccessfully) trying to get kidnapped just so something interesting would happen. But once the adrenaline stops pumping, the whole event changes and it just becomes an glorified mishmash of latex and food coloring. The initial horror had completely worn off and was replaced with fatigue. Then our group was called to play Blood Tag.

Shultz: I’m proud to say I was the longest-surviving intern in Blood Tag, which involved acquiring water cannons full of fake blood and shooting at everyone in sight. You come at the king, you best not miss.

Galuppo: Borcas used me as a human shield during Blood Tag. War has the uncanny ability to change a man.

Borcas: Let me explain: After the kidnapping, I was feeling somewhat courageous, and since my shirt was already ruined, I decided to play Blood Tag. We were all running out of steam, so manufacturing some intra-group conflict seemed like the obvious thing to do. What can I say? When the counselor instructed us to find a human shield, Mia just happened to be there for me. I was simply following orders.

Shultz: Andy Dick was apparently at the previous day’s campout. Though I’m disappointed we weren’t able to see his reaction to the zombie hordes, I’ll happily settle for the seven times (yes, we counted) Borcas shrieked in terror. I have a feeling that’ll be used against him for the remainder of the summer.

Galuppo: By the end of the night I thought the Goat Men would have made me their queen, but alas, the commencement of my reign was postponed. Sure, I didn’t find any spiders or lakes or buried treasure (not sure if this was actually an option), but I found something so much better: friendship. Also, I may have a mild allergy to latex.

Shultz: Shout-out to Mia, easily the MVP of the group. Her original plan was to sit in the safety zone the entire time, but she was an active participant and stuck her hand into a disgusting chili-like substance. We were up for anything that night, but it’s fair to say a large portion of the GHC was spent trying to get Grantland editors and writers to follow us on Twitter without totally bombarding their mentions. In that respect, it was all worth it. I’ve already accepted that most of them will eventually block me for talking about my favorite basketball team (the Wizards) too much.

McAtee: This is where the night became worth it. The campout failed as a thrilling interactive horror event, but it succeeded in bringing us together for some much needed bonding. We were dead tired by this point, but we still spent at least another hour sitting under a tent talking about our lives. Our college experience, our significant others, our darkest personal secrets. That’s where the real terror in the woods comes in.

Borcas: I went to bed a proud man. Proud that I had ventured outside the safety zone, albeit against my will. Proud that I had bonded with Alex, Mia, and Riley, whom I now consider dear friends. And most of all, proud that I had resisted the urge to use the camp’s secret code-phrase — “I want my mommy!” — that required all monsters to back off immediately.

Then, at 4:15 a.m., I woke up to the sound of air horns and a deep, satanic cackling. Hooded figures were attempting to invade our tent, and I had no choice but to use the magic words: “I WANT MY MOMMY!”

This time, I went to bed a hero.