Game of Thrones’ fourth season was full of poisonings, multiple eviscerations, a head turning into lasagna, child-elves, weird old dudes creeping on teens, sexual violence, strangulation, and weirder, older dudes hanging out in the roots of a tree. It was the show’s best campaign yet. Here are your Game of Thrones Season 4 awards. 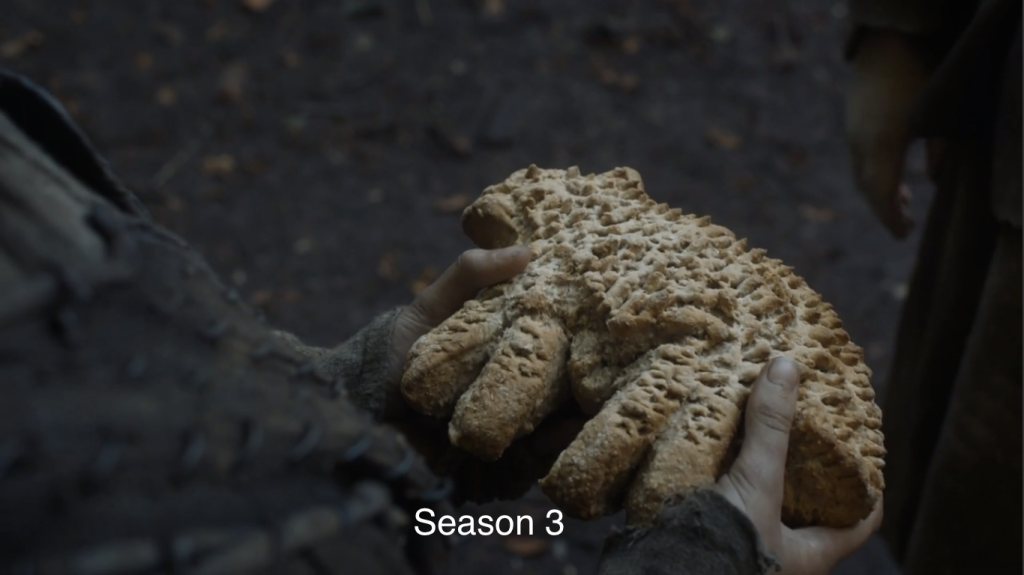 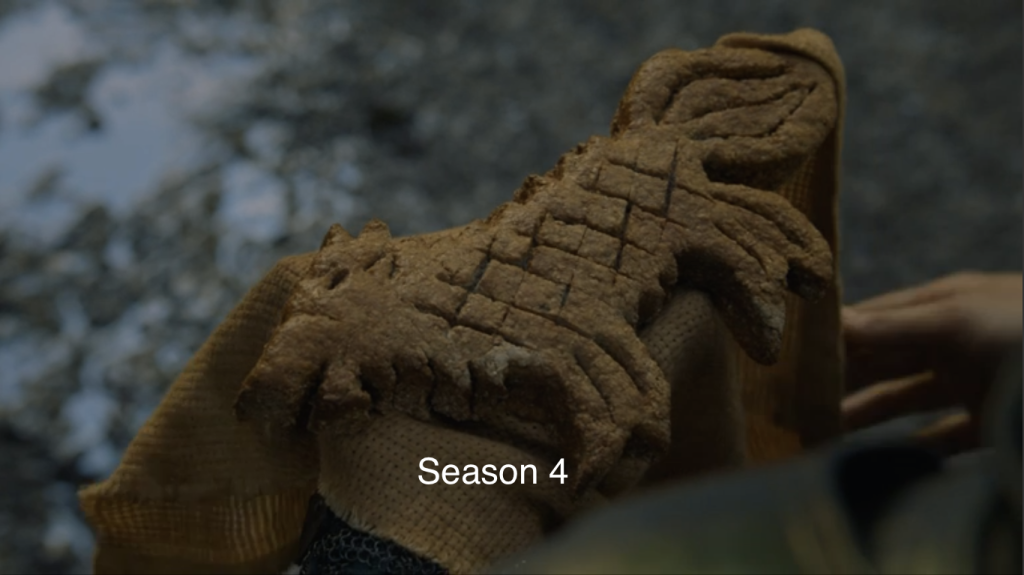 By far the easiest Season 4 award category. This is what you want to see from a young, former wastrel just starting his career in the baking trade. Hot Pie didn’t take the break between seasons for granted; he went to work on his craft, and it’s paid off. By any conceivable metric, this year marked a vast improvement in Hot Pie’s ability to produce bread in the form of a wolf. There’s the shape itself, which in Season 3 resembled, I don’t know, a horseshoe crab? One of those caps with the fake dreadlocks coming out of it? By Season 4, we have a recognizable member of family Canidae. Most impressive is the detail work: the crosshatched fur, the sawtooth muzzle, the raised hackles on the back — all great strides forward from the lumpy, acne-scarred nightmare-biscuit of last year. 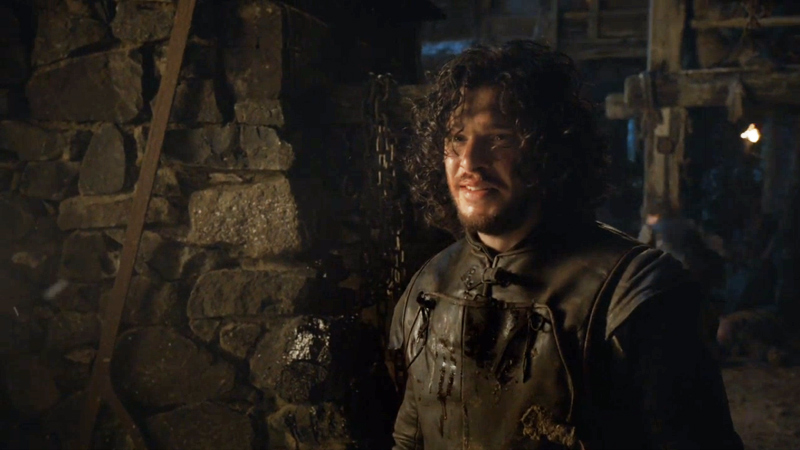 As the battle of the Wall raged around him, Jon Snow turned from the body of the Thenn he had just killed with a blacksmith’s hammer, only to discover that his Wildling bae Ygritte, like some lethal ginger Cupid, had an arrow aimed right at his heart. The North is a tough place to grow up. Sometimes, all a young Northern bastard has to look forward to is joining the Night’s Watch, killing his sworn brother to go undercover with some Wildlings, and maybe — if he’s really lucky — managing to break his vow of lifelong celibacy in the dank depths of a cave on some animal skins laid beside a geothermal pool that probably smelled like sulfur and rotten eggs. Reminded of that momentary wisp of happiness, stolen in a desolate winter wasteland, Jon Snow smiled for only the third time in the entire series. And then an arrow burst out of Ygritte’s chest. 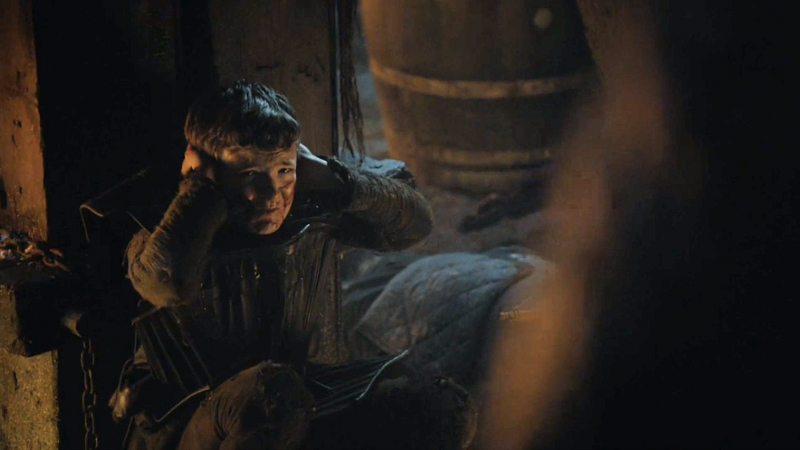 The most mysterious thing about the world of Game of Thrones isn’t the dragons, or the blood-magic smoke-baby assassins, or the mystical elves, or even the unpredictable, yearslong length of the seasons. It’s this: How the hell does a grizzled rabble composed of blue-ball virgins and hardened criminals have a working elevator capable of being run by a single child? I guess it’s not important. What is important is that young Olly, fresh off seeing his whole village cut down by rampaging Wildlings, managed to find a place for himself. Also, he killed Jon Snow’s girlfriend. Top floor, gents! Rapists, murderers, virgins, and a heck of a view! 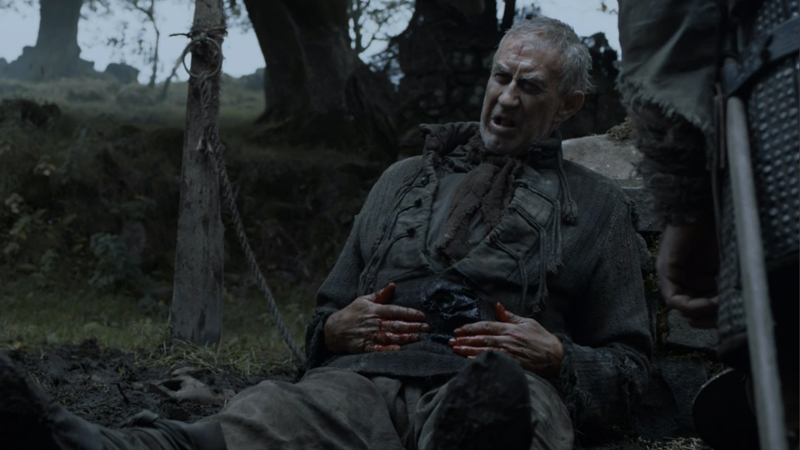 Showrunners David Benioff and D.B. Weiss met while studying Irish literature at Trinity College in Dublin; Weiss did his thesis on Finnegans Wake, and Benioff’s was about Samuel Beckett. Years later, the two would bring George R.R. Martin’s A Song of Ice and Fire saga to HBO, where it is currently the network’s biggest hit since The Sopranos. And, really, what better vehicle for Beckett’s absurdist musing on the meaninglessness of life could there be than a borderline nihilistic world where your favorite characters die for no good reason? In this scene from Episode 7, “Mockingbird,” Arya and the Hound come across a man expiring from a wound to the stomach, a common enough sight in war-racked Westeros. But this dying man was played by the noted Irish stage actor Barry McGovern, and his dialogue was lifted straight from Waiting for Godot. 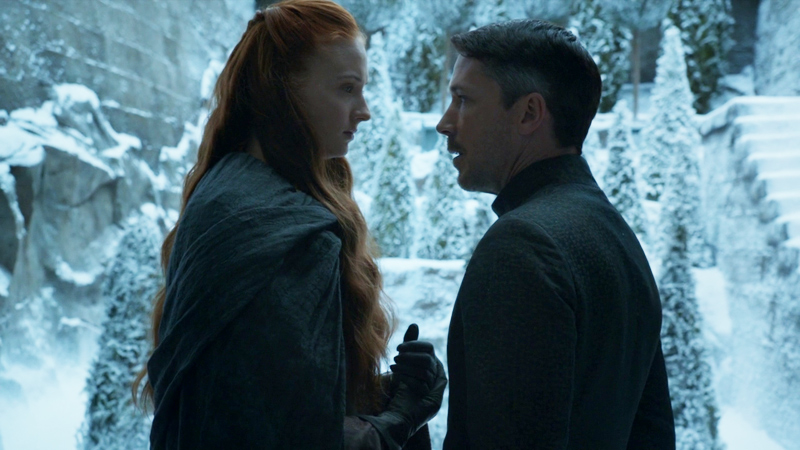 As a former Master of Coin and semi-current notorious pimp on the lam, Littlefinger has known, in the biblical sense, many women in his (probably) four-plus decades of life. One of them was teenage Lady Sansa’s aunt, Lysa. But the heart (or whatever) wants what the heart wants, and what Littlefinger wanted was Lysa’s sister — and Sansa’s mother — the late Catelyn Stark. That wasn’t to be, and hopefully this won’t be, either. 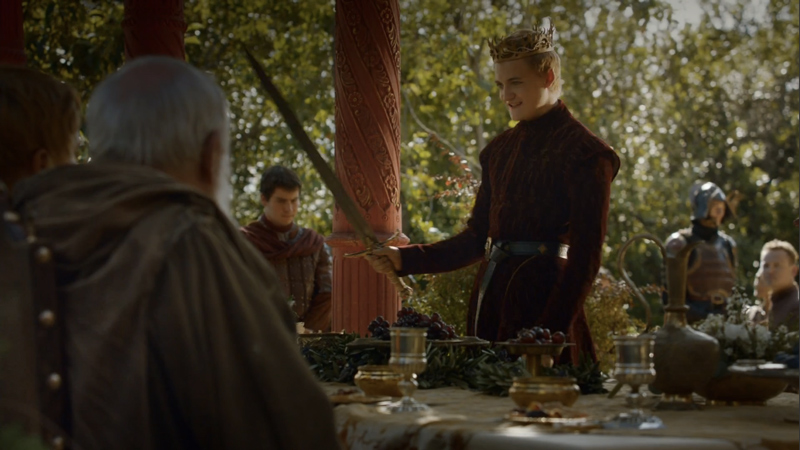 Life in Westeros is nasty, brutish, and short. No time for subtlety or subtext here; unless you name your sword or castle something prohibitively dangerous-sounding, people in these streets will try to test you. That’s why King Joff had the right idea for once when he named his fresh-forged Valyrian steel sword Widow’s Wail. 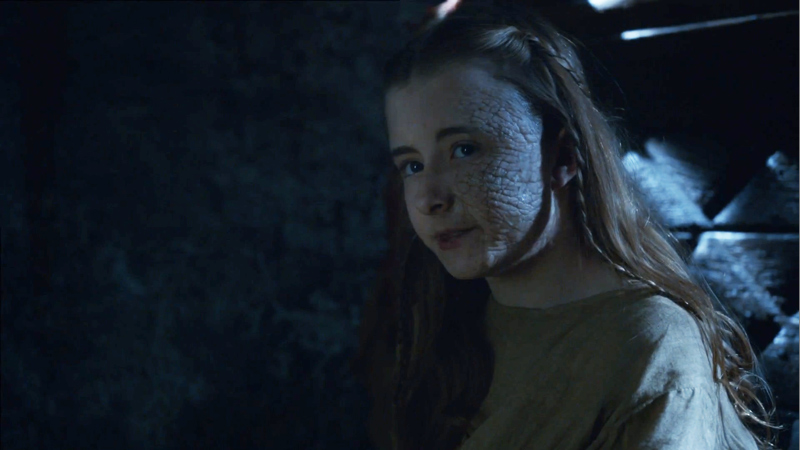 Princess Shireen, daughter of King Stannis and Queen Selyse, can always be counted on to speak truth to power. When Melisandre starts in with that Lord of Light nonsense about how wonderful a blessing it is to give people to the flames, Princess Shireen is having none of it. “People scream when they give birth. Afterwards, they are filled with joy,” says Melisandre. Maybe you can snooker Queen Selyse and her room full of stillborn-baby jars with that trash, but not Shireen, who shoots back: “But afterwards they aren’t ash and bone.” Tell ’em, Princess. And she taught Davos to read, which led to him discovering the Night’s Watch’s desperate call for aid, which led to Stannis saving the world. Or at least delaying the reckoning. Reading: It’s fundamental. 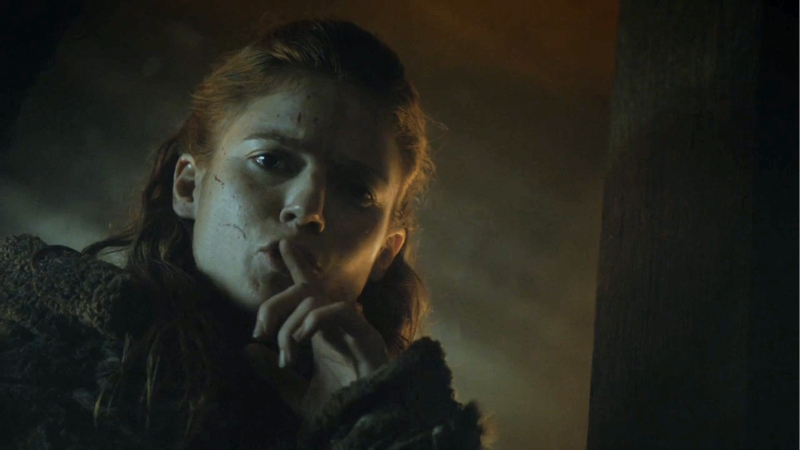 The bar for being a sympathetic Game of Thrones character is pretty low. Murder, incest, child maiming, sexual depravity, mass crucifixions — none of those things necessarily disqualify a person from being labeled a “good guy” and holding a place of warmth in our blackened hearts. Ygritte had already liquidated at least one village, and was in the process of exterminating the residents of Mole’s Town, when she discovered Gilly and Baby Sam huddled in an alcove behind some drapes and spared their lives. It was then, as blood literally rained down from the ceiling, that we understood the meaning of kindness. 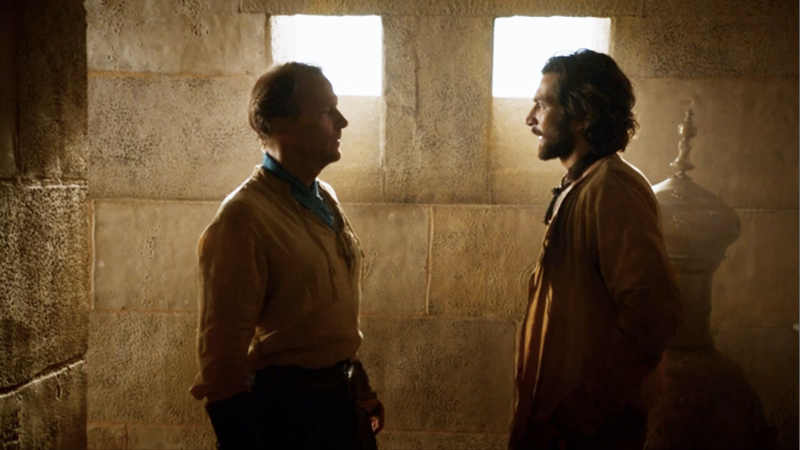 The ladies love a bad boy. That’s what I’ve heard, anyway. They love a bad boy who will bring them a bag of heads when it’s not even their birthday; who’ll swim a mile out to a deserted island to pick them flowers [eye roll]; who will, somehow, break into their private chambers (which are ostensibly guarded by 10,000 killer eunuchs and a legendary knight) just to give them those flowers and, oh, my pants just fell off, forgive me, my queen. Here’s Dirtbag Daario, smelling like sex funk and just pulling on his blouse, running into Ser Jorah the Andal of Friendzone Island. 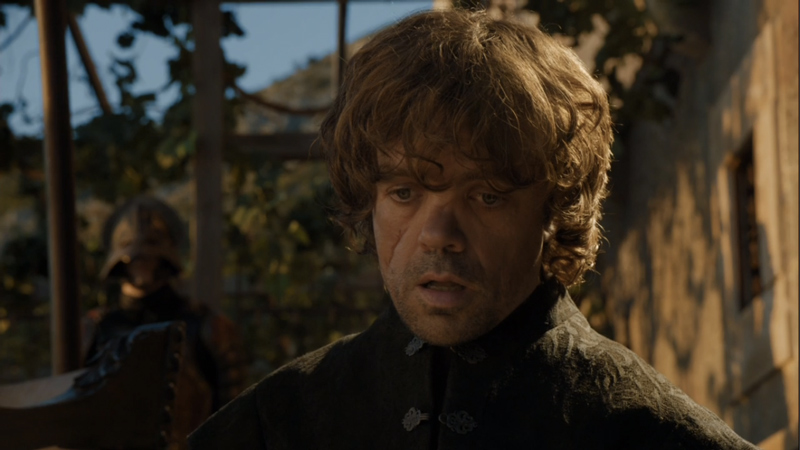 Oberyn snatched defeat from the lower intestine of victory, and Tyrion’s face says it all.