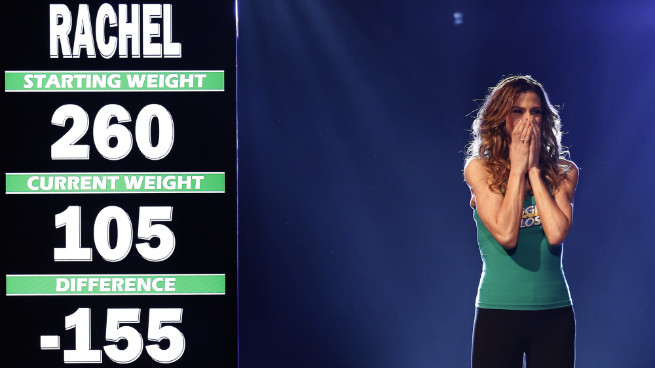 Watching The Biggest Loser was a shameful habit of mine for many years. I think maybe my interest stemmed from being overweight as a kid — which, as any formerly overweight person can tell you, means that you stay fat in your mind for the remainder of your life on earth (maybe mirrors in the afterlife offer you something better). Tuning in was a reminder that weight is fluid, that bodies change, and something about that was empowering. Eventually, however, the show began to turn me off. It lost its shine. People vomited on treadmills and urinated blood from fasting and dehydration, and the competitive nature of the show, which encourages contestants to take risks that are decidedly unhealthy, became too creepy to follow any longer. In 2009, two contestants headed to the hospital in the first episode. I think that was when I figured I’d had enough.

But still, those transformations are powerful. They appear on tabloid covers and in Internet slide shows aiming to inspire you, and often they do. There are makeovers, which distance the “before” person from the “after,” and cutouts and holograms to illustrate the dramatic change. Peel away that pesky fat, and there he or she is, the real you, the happy you, the one who wears the gown and deserves the highlighted hair (as if those are only things that belong to the thin). Weight is a complicated issue, but seeing people become more active and adopt healthier eating habits is not the worst thing a reality show has ever done. The problem is that it’s not just an educational or motivational program: It’s entertainment. Instead of contestants trying to achieve their own healthiest weight, whatever that means, they’re trying to lose so much that their opponents don’t stand a chance. There’s also a cash prize — this season, $250,000 — on the line, plus any product endorsements or spokesperson deals that may await the winner. Competition is a great motivator, but when it comes to weight loss, the only person you should be competing with is yourself. That there will always be someone thinner than you is the kind of thing that can drive you to pee blood, and that’s unhealthy competition. Blood should be kept inside your bodily vehicle at all times when possible, unless you’re giving it to someone else as a nice, life-saving present.

What’s surprising about the trumpeted reveal of The Biggest Loser’s most recent winner, Rachel Frederickson, was that it took us so long to be disconcerted by a contestant’s weight loss. Frederickson, who stands 5-foot-4, lost 155 pounds, or almost 60 percent of her body weight, in five months. It was record-breaking, but it was also the only time I can remember seeing trainers Jillian Michaels and Bob Harper making “what have I done?” faces during a final reveal:

Jillian and Bob weren’t Frederickson’s trainers, as Jillian pointed out in a tweet after the backlash began. At 105 pounds, Frederickson had dipped into the “underweight” BMI category and the sight of her new body seemed to require its own trigger alert. Though it’s impossible to tell how healthy someone is by how they appear, it did seem hard to get past the fact that the former competitive swimmer appeared to have taken things too far — but by whose standards? Frederickson told the L.A. Times that she adhered to a 1,600 calorie a day limit, “worked out a ton,” and that she had “followed the advice and supervision of the medical team at ‘The Biggest Loser’ the entire journey.” That may not have been wise, considering that the New York Times published a waiver from the show in 2009 stating that “no warranty, representation or guarantee has been made as to the qualifications or credentials of the medical professionals who examine me or perform any procedures on me in connection with my participation in the series, or their ability to diagnose medical conditions that may affect my fitness to participate in the series” and requiring the contestants, some of whom weighed more than 400 pounds, to sign off that they believed themselves to be in “excellent physical, emotional, psychological and mental health.” (Not that this information is readily given; fines between $100,000 and $1,000,000 are doled out to participants who speak to the media about the show without The Biggest Loser’s permission.)

The rules are that you must undergo such a change as to become nearly unrecognizable. Otherwise, why are we here? We want to see something dramatic. It’s television. We want to believe that the problem presented in Episode 1 has been resolved by Episode 15, the grand finale, when nobody will be left unhappy and everyone gets a new body (the implication being that that is the foundation of a happy life). Never mind that many former contestants gain the weight back, and never mind the egg white omelets and the “strong, confident woman” resulting from beating yourself into a froth. The Biggest Loser ups the ante every season, offering new records to break, and the Today show anchors think Frederickson looks just great. But as is the case with any reality show, the plot is fluid and responsibility for any mishaps incurred is a buck easily passed. Frederickson won the game: She lost the most weight, she broke a record, and Tuesday’s finale boasted the best ratings since 2011. She set the bar a little higher for anyone who looks to The Biggest Loser for thinspiration, but in doing so we’ve (hopefully) come to see how dangerous and arbitrary the placement of that bar actually is.