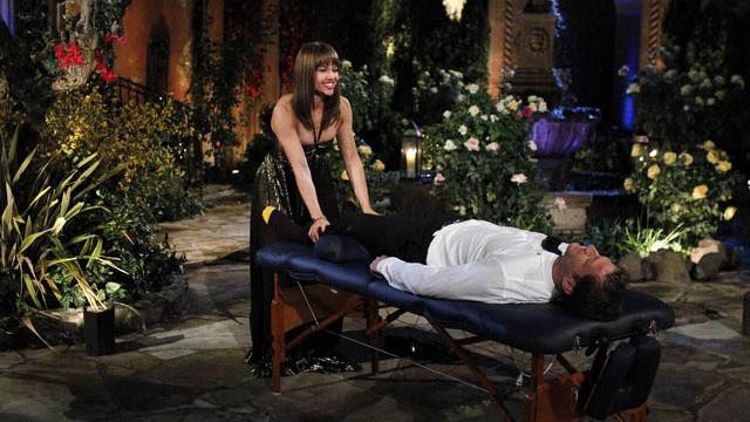 It is, as you assuredly know by now if you’ve read even this far into a story with the words “The Bachelor” in the headline, a month that our corporate siblings (hi!) have cleverly dubbed “Juan-uary.” The Month of the Juan. The month when Juan Pablo Galavis — the latest call-up from the farm team of charming Bachelorette also-rans — takes his place behind a tasteful end table piled high with roses and begins in earnest his quest for ForeverLove. We know some things about Juan Pablo: He’s the first non-white/Latino Bachelor, the first former professional soccer player Bachelor, the first Bachelor to awkwardly barter salsa lessons for shirtlessness lessons with Sean Lowe. But none of that really matters now. Once the competition begins, the slates are wiped clean; past becomes prologue becomes delicious possibility. And maybe, just maybe, a man finds the temporary soulmate he’s been waiting for his entire televised life.

And with that fateful turn of the Juan-uary calendar page, a new semester of Bachelor School commences. Truth be told, the School is experiencing some growing pains; we’ve shuttered our campuses in Tampa, Milwaukee, and Loading Dock 14 at Mall of America to better focus our resources on our core learning center in downtown Los Angeles and to finally complete the abstract sculpture of Lowe and Catherine Giudici making love atop an interlocking pile of iron roses/snakes we commissioned in celebration of their upcoming televised wedding. (It’s possible that in the final version the snakes will have rose stems for bodies, or that the roses will have snake bodies instead of stems. It’s a fluid concept the artist claims can only be understood upon full payment. It’s a whole thing.) But now is not time for art and lost invoices, it’s time to break down the lessons of the season premiere, which enjoyed its highest ratings in three years. Things are looking up for everybody in Juan-uary. Loading Dock 14 might yet reopen by midseason. Let’s learn.

1. Speak the International language, But Not Quite Yet

As a Venezuelan, English is not Juan Pablo’s strongest tongue, a fact the show will mine for comedy roughly nine times per episode. He is, however, fluent in the “international language,” which he adorably mistranslated as “love.” Longtime students of this franchise know there is only one language that every Bachelor speaks fluently, and it is this:

Indeed, it’s almost too rudimentary a concept to bring up here; it is, in its way, the cornerstone of all Bachelor lessons. But after a very lengthy layoff between seasons, it bears this blunt reintroduction. In the world of televised dating competitions, love is a possible byproduct of putting out, the eventual roaring fire to putting out’s smoldering kindling. The catch, of course, is that it’s far too soon to put out at this introductory stage of the game. The field is too crowded, the Bachelor’s attention too divided. He’s struggling with remembering names (he’s bad with names), with hometowns (who can keep them straight?), with occupations (most of them are made up and therefore hard to track). And so it’s time to merely think about when one might make the first move in one’s well-considered putting-out gambit. Like, Day 2, after the first rose ceremony culls the harem. Early movers are early winners. But not too early.

Another crucial piece of basic strategy: Chris Harrison is the Lord of Lies, the Master of Evil Ceremonies, the Shadow Bachelor. His two responsibilities are to preside over the most dramatic television show possible, and to keep track of how many flowers are left on the table during the rose ceremony so that he can interrupt and remind everybody that there is just one more rose left to distribute, thereby ratcheting up the tension to a level so unbearable that at least five hopeful contestants will faint dead away and require immediate medical intervention. When he’s not directly engaged with either of those tasks, he is circling the harem, feeling out weakness, laying groundwork for his own nefarious ends. He is refilling half-empty wine glasses offscreen. He is whispering I think you better go find Juan Pablo and push for some alone time. Haylee S. has got him again in the ears of the suggestible. And if things don’t work out there, I know a guy who knows some things about women. More merlot?

Stay away. He is very good at his job. You are no match for Chris Harrison.

We’ve already established that your Bachelor might not be good with names. There are so many names to remember! It’s like everybody has a name, and most of them are different. The inclusion of a prop in your initial curbside meeting will help you stand out from the other 26 contestants desperately clawing for precious Bachelor mindshare. Choose something big, flashy, memorable. A piano? Sure, bring a piano. He will remember “girl with the piano,” at least until “girl with the full marching band, complete with a giant rose balloon float” comes through. A dog? Everybody loves dogs. A dog is a fine prop, unless you let it slip that it’s your emotional stability service animal. A soccer ball, he likes soccer. A massage table? A massage table. A small, meaningful trinket, like a fishing hook?

No. That is a gift. A bauble. It is not a prop. Your competition brought a piano. She is playing a concerto. The other girl’s dog is dancing to the music on its hind legs. Your fish hook is already in the fountain, right along with any chance you had of setting yourself apart. Prop big or stay home.

4. Do Something Utterly Insane Right Out of the Limo

We at Bachelor School are constantly fine-tuning our curriculum to offer you the absolute latest in learning technologies. And, most importantly, we are committed to evolving from our own mistakes. One year ago, we offered this lesson:

As you may or may not recall, Lindsay, last season’s “Ballsy Limo Bride,” advanced all the way to the final week. We’ve always preached process over results, but we also have to recognize that there might be an Initial Insanity Inefficiency that can still be profitably exploited for strategic gain.

And if there is, boy effing howdy, popping out of that limousine with a fake pregnancy stomach protruding from your cocktail dress is about 30 times as risky as a simple wedding dress. A cursory examination of the premiere’s “This Season on The Bachelor” teaser seems to reveal that our pregnancy-stunter survives fairly deep into the competition. For now, we’re willing to endorse this strategy, albeit with an important qualification: A wedding dress PLUS a false baby stomach is probably pushing things too far, engaging a single man’s twin commitment fears too viscerally to be effective. He’d likely prefer that you make a terrifying first impression by immediately dousing him with a bucket of warm sheep’s blood. Choose your crazy carefully. You are walking a very fine line between “I admire your boldness” and “I need a clean pair of pants and a fire hose, Chris.”

Sometimes we don’t think we understand anything anymore. In a very real way, this is a learning process for us all.

Sure, be a hippie. That other one wore a fake stomach. Some bare feet ain’t gonna hurt unless there’s an obvious ringworm deal happening.

There is no quicker way to book your own return ticket in the Limo of Despair than succumbing to the pressure of the unnatural situation you find yourself in on the first night of eliminations. It may be true that you are not quite over the considerable and perfectly understandable pain of being abandoned by your onetime fiancé, an indignity compounded exponentially in your nationally televised revelation that it happened over the phone. An audience of millions will feel for you, will want to comfort you, will want to whisk that wine glass out of your hand and airlift you to the safety of literally anywhere else in the universe. They may wish to initiate a class-action lawsuit against the producers who screened the contestants and let someone so obviously fragile through just to marinate in her inevitable misery.

But then Chris Harrison will appear in a cloud of brimstone and rose petals, whisper a reminder about what great television this will make, and why don’t you just flip over to the football game and watch the nice concussion ballet, Captain Complicity? No one forced her to be here. Maybe they’ll click despite the nervous breakdown and find ForeverLove! Isn’t that why we’re all doing this? More merlot?

Did you see that dog? The dog got a rose!

Anyone can win love on The Bachelor. Anyone.