On Monday night, after months of breathless Chris Harrison pimpage promising the kind of drunken antics and ocean-based hook-ups we’d come to expect from one of his late-summer dating programs, the venerable Bachelor Pad franchise was transplanted to Tulum, Mexico, and reborn as Bachelor in Paradise. Here are our staff reactions to its debut. Raccoons figure prominently. Disney, man.

Caitlin Mangum: I understand roughly 23 percent of this show’s premise. People mysteriously leave, and show up, and leave again. Is there prize money? Is there a holding paradise for the sub-ins? Is there pre-show STD screening? I don’t think that Chris Harrison even fully understands what the hell is going on.

Even with rules more convoluted than the FCC blackout policy, the Bachelor in Paradise premiere can be summed up surprisingly simply: near homicide, shocking swimsuit choices, boobs, tears, and a “conversating” raccoon.

The cast is largely nuts, led, of course, by AshLee, Queen of the Psychotic Non-Girlfriends, Organizer of Closets, and a TeeVee producer’s dream. After 45 minutes, AshLee had already planned her wedding to Graham, so she was none too happy when Clare threatened her position as the future Mrs. Bunn. “She’s a slut. She slept with Juan Pablo. You think she’s not going to make a move on him?”

With that, Clare d̶e̶c̶i̶d̶e̶d̶ ̶n̶o̶t̶ ̶t̶o̶ ̶d̶i̶e̶ took the high road and graciously bowed out of her date with Graham. This cast actually has the ability to make Clare look sane — that is, if you accept conversations with raccoons as normal. Don’t sleep on Clare, though. The beach is conveniently located just 10 yards away, leaving plenty of opportunities for my second-favorite ocean coituser to make waves (literally) this season.

But the real MVP of the series premiere was Lacy. Who, you ask? Yeah, I have no idea who she is, either. When casting this show, how many people did the Bachelor producers have to call before they got to Lacy, the girl whom Juan Pablo, the worst Bachelor of all time, sent home on night one? Well, thankfully everyone else said no because it looks like they’ve struck a gold mine with Lacy and all the “assets” that she brings to Paradise.

Rounding out the cast are Michelle K., the current/future serial killer; Ben, the capri-wearing nominee for Worst Father of the Year; and Marcus, the dude who is allergic to clothes.

As Marquel said, “Let’s be honest here. The coconut doesn’t fall far from the crazy tree.”

Well, lucky for us, these contestants are a fucking coconut grove of crazy.

David Jacoby: What did I just watch? Did Bachelor in Paradise just give the Atlantic Ocean a UTI? Why didn’t they pick a resort with a pool? Does someone jump off a balcony and break both legs next week? Was Clare’s conversation with the raccoon a secret Guardians of the Galaxy sponsorship? (ABC, Marvel, and Grantland are all owned by Disney.) Did Elise just say that she was in love with Dylan after a week of show-sanctioned coitus? How come you never see any of the staff of this resort? What does Chris Harrison do for two months in Tulum? Did Clare really just claim she dreamed the future? How do they not call her Clare-voyant? Which is crazier about AshLee, the fact that she thought she was in an exclusive relationship with a man she just met, or that she painted weird patterns on herself every morning? Did Marcus just hump a wave? Anyone see that G-string tan line on Elise? Me neither. Seriously, why did Marcus hump that wave? Are they going to call off the NFL season and just air this instead of Monday Night Football? They should, they really should.

The Vocabulary of Paradise

Juliet Litman: Paradise has its own complex linguistic system. Here’s a short primer to catch you up.

Vista: Something you step into. Potentially a beautiful sight, but it’s more of a feeling. At first you may think you’re being attacked by fire ants, but then you realize that you’re being embraced by the vista. It’s part of the first stop on the journey to love.

To Over-Exceed Expectations: When a supposedly fun and sexy experience set in paradise more closely resembles a cruel social experiment that throws mentally unstable (but very attractive) people into isolation. Your expectations will be over-exceeded only when men and women are forced to pretend that they are all sane, but, in fact, they are all on the verge of mental collapse.

An 80/40 Split: Paradise does not rely on the base-10 number system, so probabilities cannot be figured in percentages. Mathematically speaking, in the sideways world of Paradise, the whole is defined as 120. At least for now. Don’t be surprised if these parameters change more rapidly than inflation in South America.

To Forgo — While, in the normal world, this means “to go without” (and is often used in reference to individual hotel rooms on fantasy suite night on The Bachelor and The Bachelorette), in Paradise it is a term used to discuss giving out roses. To forgo a rose means to give it to the wrong woman — the woman who you might be interested in but who has already hooked up with two guys in a short span of time and is clearly doing whatever’s necessary to stay as long as possible. 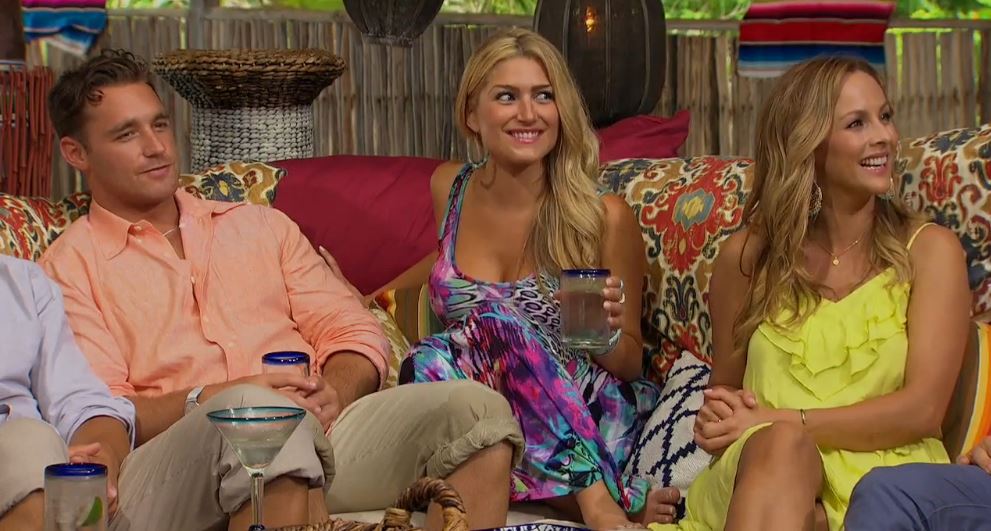 There Is No Charity in Paradise

Bryan Curtis: Bachelor in Paradise seems like the perfect show for the age of the Marvel Universe. You’ve got an assemblage of heroes and villains from days of future past, forming alliances that dissolve within seconds. Also, Clare talked to a raccoon.

Initial thoughts: I really liked Daniella. She spent the episode establishing herself as the tree house voice of reason, the sensible one that Clare and AshLee could orbit around. Unfortunately, she forgot to talk to anybody. She broke down in tears after the rose ceremony, probably because her reality-show card had just expired.

The roses offered to Sarah — first from Marcus, then from Ben — had the ugly whiff of charity, didn’t they? Sarah doesn’t “deserve” to stay any more than the other contestants. She wants to meet somebody. I hope she does next week.

But my first-impression rose goes to AshLee, who came to snare Graham, whom she’d been following on “social media.” Graham didn’t immediately comply. That sent AshLee into a dark place she won’t be able to escape without putting on a blindfold and leaping into Graham’s arms. I’ll give her this: She’s a Texan. 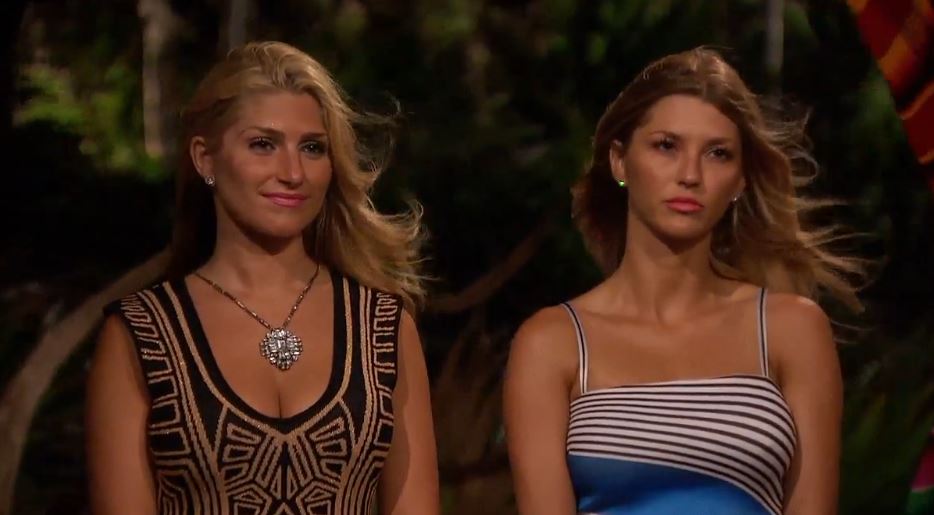 “Because there are seven girls and six guys … one of the girls will be going home this week? Or sacrificed on a ruined temple? Not clear on the rules yet? They kind of keep us on our toes with that.”

“She’s a slut! She slept with Juan Pablo.”

“If this is gonna be drama, take the date card! I don’t want it! I’m being bitten by fire ants!”

“I know you’re just a raccoon that the producers have cut into my conversation to make me look crazy, but you’re a really good listener. I think you might secretly be transporting Chris Harrison’s soul around the resort. I see his soul behind your little raccoon mask.”

“I can’t wait to explore the ruins. Of her emotional well-being.”

“There’s so much history and culture surrounding us. I couldn’t wait to bone with all those classy ghosts watching us.”

“How’s your dating life been?”

“Nonexistent.” “Really? Why haven’t you dated?” “I eat them after the first date. Makes a second date really tough, you know.”

“Solo traje de baño. You know what that means?” “We are supposed to flush ourselves down the ancient toilet over there and into the underground oasis.”

“Two girls will potentially be going home this week. Or they will be traded to the cartels. The rules are fuzzy, they keep feeding us alcohol and telling us about how the media sensationalizes trading dating show contestants for cocaine.”

“This isn’t one girl gets to pick her guy. This isn’t The Bachelorette.”

“We all know one or two or 12 of us will be going home. Or to Sinaloa. No one knows. Exciting!”

“I’ve actually nicknamed it Claradise. Hello? Mr. Raccoon Harrison? Why don’t you listen to me? I need you right now.”

[Lightning flashes and thunder rumbles through the rose ceremony.]

“Indeed. The dark one is nigh.”

[Chris Harrison appears from behind a curtain.]

“Hey, gang. Let’s get down to business. There are roses to hand out.”

Emily Yoshida: When this show wins every Emmy next year, I think it’s only fair if they donate a couple to the good folks at The Onion, particularly those responsible for Sex House.

If you haven’t seen Sex House, it comes from the Burning Love/Hotwives of Orlando school of reality parody, clearly made by people who know the subject intimately. But whereas Love and Hotwives directly send up specific shows, Sex House was kind of an amalgamation of different “house”-set reality shows, with all the subtlety stripped away. In Sex House, “six sexy strangers” are made to live in a windowless, definitely not-up-to-code loft stocked with taped-over liquor bottles and hidden dildos. They are sent food by the producers whenever they manage to coitus each other, which, spoiler alert, doesn’t happen all that much. (Sample Episode 4 dialogue: “We’ve been playing this game, Settlers of Catan, to kill time … ”) It was a really accurate approximation of a show that might exist in some dystopian future. But the dystopian future is now! Has anything ever been a pre-parody of something? I don’t know, but I hope they’re keeping the pumpernickel refrigerated in Claradise.