Congratulations! You’ve survived into the third week of The Bachelor. This is a special time. The opening-night buzz, sustained by an intoxicating mix of unlimited alcohol, the distilled desperation of 30 marriage-age combatants fighting over the same man, and the wide-eyed twinkle of the Luckiest Farmer in the World, is finally wearing off. The battlefield is slowly but surely being cleared of the broken bodies of the fallen, making the still-treacherous path to ForeverLove somewhat easier to navigate. The hot tub is at the perfect temperature. (The hot tub is always at the perfect temperature. These people are hot tub professionals; you’re only now noticing their masterful temperature-regulation work.) But this is not the time to settle in. It’s the time to dig in, to fortify your position, to somehow find purchase in still-uncertain terrain with those six-inch heels you inexplicably wore to a pool party, maybe because you think they’d give you a potentially deadly advantage in a chicken fight. A one-eyed enemy is a less dangerous enemy, unless your Bachelor has a thing for lady pirates, who probably seem deliciously exotic to a simple boy from Iowa who likes to pretend his tractor is a buccaneer’s frigate. Where were we again?

Oh, yes: Now the real work begins. This is the work that will allow you, the results-minded contestant who craves victory at all costs, to put yourself in a position to capture the endgame bauble on your journey to eventually fall short of your Bachelor’s every unrealistic, prime-time-television-fortified dream of partnership. Let’s review this week’s episode and learn some things about some things, shall we?

Do you know why everyone keeps saying the word “amazing”? It’s because everything is amazing. Words abandon you in the face of the ineffable, and thesauruses, overcome by their inability to help you capture the thrill of seeming perfection, throw themselves off a high library shelf in despair. You could go with a variety of other expressions — “awesome” or “incredible” or “[subvocal purring sound indicating extreme pleasure]” — but “amazing” is getting the job done. How else to describe a situation in which you’ve been transported away from your humdrum existence as a facilitator of in utero baby-miracles, or procurer of life-giving organs, or practitioner of freelance journalism and deposited into the middle of a fairy-tale opportunity literally tens of thousands of people would cut your throat with a broken wine glass for? The true wonder is that anyone without the resources of a broadcast television network behind them ever finds love at all.

Make “amazing” your mantra, the calm center of incredible you return to over and over again when things get overwhelming. Ignore the “amazing jar” set up to deter you from expressing these feelings; consider every dollar you deposit there a down payment on your imminent happiness, an investment in a perfect future you can barely dare to dream of. Manifest the amazing you want to see in your own life. Swallow down the reverse-peristaltic flood of hot bile every time you hear one of your rivals stealing your happy word, and redirect the nausea into euphoria. Everything is amazing, especially you. And him. Don’t forget him. This is his amazing show. Throw another dollar in the jar. Amazing. OK, two dollars. Did you hear that bell, too? Weird.

2. Get comfortable with “normal.”

This is a tough truth you may not be ready to hear this early in the competition: Life is not all helicopter rides and secret urban tractor races and midnight zombie exterminations. It’s mostly those things, for now at least, but it’s also — eventually! — settling into the soul-numbing comfort of the mundane. It’s trips to Costco. It’s value packs of beef jerky and shrink-wrapped steaks and enough bulk containers of Heinz to fill a Jacuzzi. There will come a time when the cameras will abandon you (don’t worry, they’ll be back for various reunions and red carpet specials and “After the Final Rose”s), leaving you and your Bachelor (you’re still not married yet, let’s not move too quickly, marriage is a very big commitment!) to figure out how you even get to Costco without door-to-door chopper service, perhaps in a sensible car you drive yourselves, like filthy animals (who can somehow drive cars).

Buy those steaks and fire up the Weber. Set up the folding table and chairs in the backyard. Listen to the chirping of the crickets that’s cutting through the emptiness of your increasingly frequent silences. Things were amazing-amazing before. Now show him you’re ready for normal-amazing. Are the steaks done? These are pretty good steaks. Maybe you should go to Costco tomorrow and pick up some more. Fine, Sam’s Club, just to mix it up.

Perhaps you will find yourself in a backyard — not your own backyard, that will come later, every weekend for the rest of your life — and in the company of a celebrity. Not the usual Chris Harrison celebrity, the one you’ve gotten used to, the one who’s always been a part of the deal, the one whose entire job is to perpetuate the illusion of normalcy. A Jimmy Kimmel celebrity, a talk-show-host-level celebrity, a celebrity whose entire job is asking questions. A stand-in MC who’s there to bad-cop you while ostensible good-cop Chris Harrison is off having fresh angel feathers hot-glued over his bat wings.

He may ask you uncomfortable things, such as this: How will you feel when your Bachelor inevitably has sex with the other three contestants he selects for the Fantasy Suites, because everyone knows the Fantasy Suites are nothing but luxuriously appointed fuck-palaces engineered to determine carnal compatibility?

Don’t be thrown. You know the correct answer even before it leaves your lips: “It’s all in the game.” Do you believe it? You have to believe it then, in the moment, or he’ll eat you alive on cross-examination, then take your Bachelor outside to loofah his back and drive you even further into the counterproductive madness of jealousy. Be ready for anything. By the time you even realize you’ve exposed a critical emotional vulnerability, he’ll already be lathering up the soap. And Chris Harrison will be cackling at a monitor somewhere nearby, pleased his guest interrogator so easily broke you. 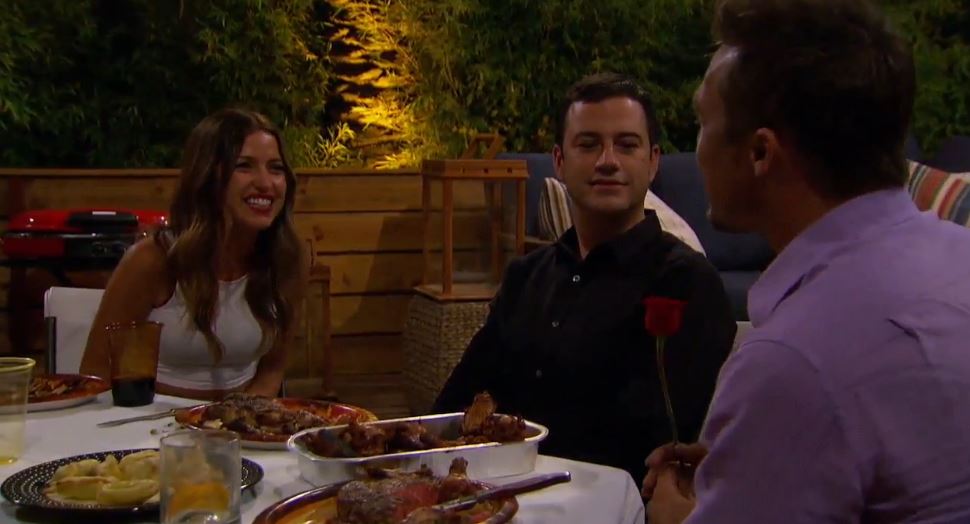 Again with the farm stuff? Again with the farm stuff. You get it: If you win the competition, you’ll live out the rest of your days as Prince Farming’s betrothed field hand, rising each morning to the crowing of roosters (do farms still have roosters? Probably, right? At worst, there will be a terrible rooster tone on his alarm app), ready to put in an honest day of … let’s check the challenge rules again real quick … shucking a giant basket full of corn, chasing chickens around the coop, speed-frying an egg, chugging a mason jar full of straight-out-of-the-teat goat’s milk, shoveling manure, and wrestling a greased pig. Your Bachelor — a real, live farmer, have you heard? — needs to know you can accomplish these common tasks faster than others in your cohort, because each and every day begins with such a frenzied gantlet just to get the blood flowing.

Show no signs of exasperation with the constant repetition of agri-tasks; rolling your eyes is tantamount to plucking the petals off your Farm Impression Rose and spitting them back in his disbelieving face. Dive on that lard-slicked hog like it has your Neil Lane MaybeDiamond™ in its belly. Because it does. You’ll discover it next week, when it’s time for the butchering game. (And don’t name the pig. It’s a rookie mistake you’ll regret the moment you see the flicker of horror in Wilbur’s eyes when you reach for the cleaver.)

What? No idea. You just have to take his word for it when he says “roll the cob” means “the ability to talk to people in social situations,” even though it sounds like an awful euphemism for something far more crude. So sure, be a cob-roller, if that’s what he wants. How hard can it be after all of that shucking practice? Right now he’s promising a magical life of cob-rolling at crashed weddings, but know that sooner rather than later you’ll be rolling cobs with the guy holding the frozen hors d’oeuvres tray at Costco. This farm stuff, for real, though.

There’s no best time to interrupt your Bachelor in the midst of his serial makeout sessions to open up about the unspeakable tragedy that left you a single parent. That conversation is always going to be an incredibly difficult one, and potentially made all the more awkward when he’s still wiping another contestant’s lipstick off his mouth when he realizes you’re about to share the most painful experience of your life. This is a tough one; just get the conversation out of the way as early as possible and let the chips fall where they may. And ignore any lipstick smudges he may have missed: He’s going to be too distracted by the unexpected and mind-scrambling demands of performative empathy to get every last crimson streak wiped up. Cut him some slack. There’s a camera three feet away making sure he looks appropriately upset by your revelation.

Careful now: It’s way too early to “take him to bed” take him to bed, and far too risky when you consider there are something like 17 other women circling like alone-time vultures; better double-check the hot tub for stray bachelorettes trying to sneak a one-on-one encounter. There will be time enough for the classical definition of “take him to bed” in the Fantasy Suite, or on any dates presenting the intercourse-obscuring waters of a lake or ocean. For now, get him acclimated to the idea of future physical relations by inviting yourself in for a tour of his Bachelor quarters and acting surprised by the presence of a bed there. Accept his invitation to “test it out.” This initially may take the form of a childish leap onto the mattress, but in every seemingly innocent bounce lies the implicit promise of more adult undulations when the time is right.

Seriously, look in the hot tub. Someone’s hiding there. Someone’s always hiding there. Grab two or three trusted sister-contestants and establish an immediate Jacuzzi blockade. Never let anyone take a free shot at your Bachelor on your watch. Never. We can’t recommend you actually drown someone in retaliation, but there have to be consequences for treachery. Whoopsie, someone’s floating face-down in the bubbles, she was like that when you got here. You better go back inside and check the bed to make sure nobody else got hurt.