A tradition unlike any other … the BET Awards.

[Note: An impressive knowledge of trigonometry is essential to continue.]

There is no other event on television like the yearly convergence of Black and Entertainment and Television.

It’s a beautiful, necessary, often-frustrating four-hour unicorn. And I love it so much.

Last night, at some point during the third hour, I mentioned that the up and down feelings the BET Awards caused were akin to an emotional sine wave. Waking up this morning, slightly more clearheaded, I realized, mathematically speaking, how incorrect that claim was.

Not sine, tangent. It’s the only way to describe what one goes through while watching and participating in this spectacle.

With the sine wave, your emotions smoothly rise and fall. And the high is the same quasi-high and the low is the same quasi-low each time. The Grammys and the Oscars are great examples of Sine Wave Award-Show Emotions. Just look at how chill this is.

Not the BET Awards. Not even close.

Both the sine and tangent graphs start at zero, suggesting the viewer begins the night with a blank slate, completely unsure where this is headed, but open for anything. As the show begins, both the sine and tangent graphs’ line rises, suggesting the viewer is pleased with the early proceedings of the show. But, very quickly, roads begin to diverge.

What happens with the BET Awards? One, two, three, four things happen, and you’re ecstatic to have lived another year to see them all. Everything is making you smile. And the BET Awards viewing party that you’re in the middle of is abuzz.

But then a deplorable event happens. And you black out from rage. Or embarrassment. Or disappointment. And next thing you know, you’re on the floor, shaking your head, wishing this show never existed. And there begins the process of slowly building yourself back up, forcing yourself into #BETAmnesia and eventually getting back to a point where nothing speaks to you more than this award show — only to quickly black out from another travesty, returning to the emotional abyss only the BET Awards can reach, a few times over the course of four hours, once a year.

The true greatness that lies in the BET Awards is that you can feel those exceptional and terrible moments coming, but there’s never any way to predict how it will happen. Because there’s no clear rhyme or reason to how the segments are organized. At one point, you have to assume the deck was perfectly stacked, 52 cards in numerical, suited order. But then that deck got lost and an intern replaced it with six decks of Uno that he found in a Tupperware bin in the storage closet. And then, five minutes later, the show begins.

It’s how you go from seeing a stunning Tatyana Ali on the red carpet, to Pharrell bringing out Missy Elliott, to a Chris Rock monologue, to Chris Brown being wholly and lovingly accepted by the BET audience (a trend that continued throughout the entire show, and post-show, as artists old and new, male and female routinely commented on how happy they were that he was back, as if his disappearance was brought on by a case of the chicken pox.)

It’s the transition from an Usher greatest hits medley, to a flurry of humble Pharrell acceptance speeches, to presenter DeSean Jackson (the Washington professional football team) saying “pause, pause, pause, ain’t none of that” after actor Boris Kodjoe gave him the layup of “plays with balls.” (For those of you unfamiliar, “pause” is unfortunately code for “I am a straight person that just said a thing that made me sound like a gay person and I need to publicly acknowledge my momentarily gay-like transgression.” Trust me, it’s a very cool, accepting thing to do that will win you many cool, straight friends like cool, straight Dwight Howard.)

It’s a Lionel Richie tribute, including an incredible choir-backed Yolanda Adams performing “Jesus Is Love,” followed by the subject of said tribute and the recipient of the Lifetime Achievement Award having his name spelled incorrectly. 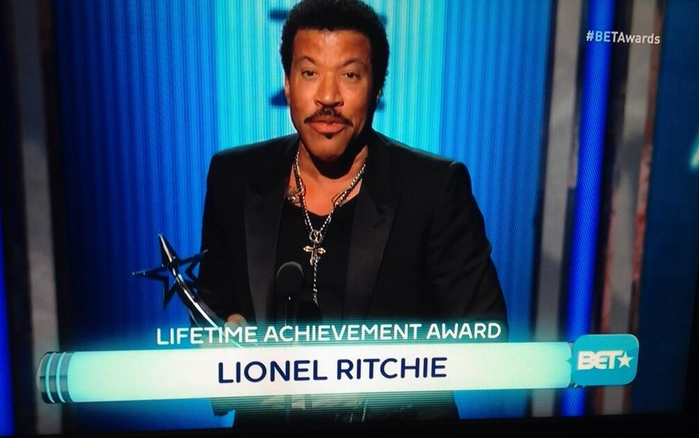 It’s Young Money (at this point, everyone who Lil Wayne has in his phone) hilariously winning for “Best Group”; followed by a completely left-field R&B medley of Troop, Color Me Badd, and Silk; into yet another chapter in the Robin Thicke Really Wants Paula Patton to Stop Not Now-ing Him on Facebook saga.

It’s Myrlie Evers-Williams talking about Freedom Summer, to Phylicia Rashad apparating onstage to pay tribute to Ruby Dee and Maya Angelou, to Floyd Mayweather presenting an award like a Speak & Spell, to a Nicki Minaj acceptance speech in which she calmly spreads ether upon Iggy Azalea, and then follows with a puzzling story about almost dying but not calling the police because of TMZ and then passionately proclaiming that BET is black-owned. Which it isn’t (cue the tangent line, go directly to jail, do not past go, do not collect 200 dollars balloon deflation).

It’s waking up in the morning, pumped to write about the BET Awards, particularly about how good the Lionel Richie tribute was, and then having your yearly reminder that the BET.com video embed platform is an act of cyberterrorism.

The climax of the BET Awards is anticlimacticism. It’s what separates it from the pack: the knowledge that the show will not end with the as-advertised bang. That things aren’t always what they seem. That the extravaganza they’ve been pushing for hours will not be worth the four-hour wait. Of course, in BET’s eyes, if it gets you to stay for 220 minutes, its job is done, regardless of what happens in that last 20.

Which is why it tells people at 8:01 that there will be a special Jay Z and Beyoncé performance. And why at 11:43, it cuts to Chris Rock introducing Jay and Bey — on a video from their tour.

The BET Awards are television’s equivalent of Thanksgiving dinner. It’s every year, a few wild cards always show up, and it goes on two hours too long. And like Thanksgiving, while not exceptionally good for you, the food comes from a place of love. And is goddamn delicious.