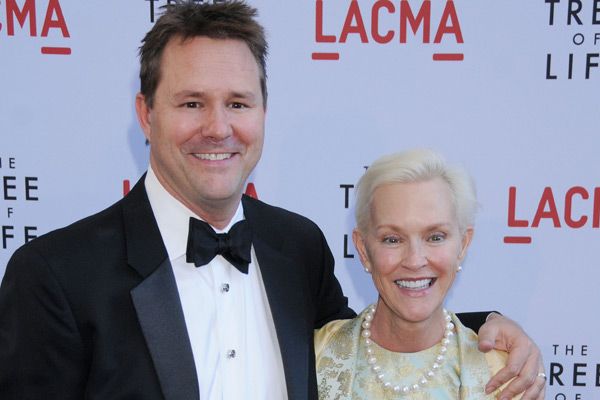 When was the last time Terrence Malick said something controversial? If you answered, “I’m not sure — like, not in forever, though,” you are correct! And that’s because the man straight-up doesn’t give interviews, and doesn’t go near cameras. TMZ accidentally captured him palling around with Benicio Del Toro earlier this year, but he’s mostly hanging around in the background of the footage, being all recluse-y. That means we’re still working primarily with just this one photo here.

So by most available evidence, he’s a very smiley guy. Very sweet guy. And completely uncontroversial. How about his better half, Alexandra “Ecky” Wallace? She’s a bit chattier and is pictured above with her son not her famous husband. THR reports from the 2012 Toronto Film Festival:

Many people were left scratching their heads Monday night at the North American premiere of Terrence Malick’s sixth feature film, To the Wonder — and not only after the hard-to-decipher film started playing. Malick … was not present for the premiere. But his third and current wife, Alexandra “Ecky” Wallace (his high school sweetheart), was, and she introduced it in a most bizarre way: “My husband sends salutes to the men and hugs to the women. We love Canada, and, in fact, we thought about becoming Canadian citizens after 9/11. We have much to learn from you.”

A couple of things to note here. First, it’s not like Wallace is always out and about as a proxy for Malick. This is a unique case: To The Wonder is reportedly based in part on Malick’s relationship with Ecky, so it’s not completely random she’d be introducing it to an audience. Second, what Ecky’s actually saying isn’t so far out of line with what notable celebrity liberals of various categorizations were saying in the early 2000s — namely, that in their point of view the U.S. was taking a turn toward an overly aggressive foreign policy in the years after 9/11, and that if Bush was reelected they would consider leaving the country. But tossed out, all non sequitur-y like that, and on the anniversary of 9/11? Not a very good look! But you know how Ecky could have avoided any potential fallout that may now follow her? By staying at home like Terry, being a recluse, not saying a word.

And so, once again, the timeless virtues of being a hermit shine bright and true. Terrence Malick, you are a visionary in both your art and your ridiculously sheltered home life. We salute you, sir.