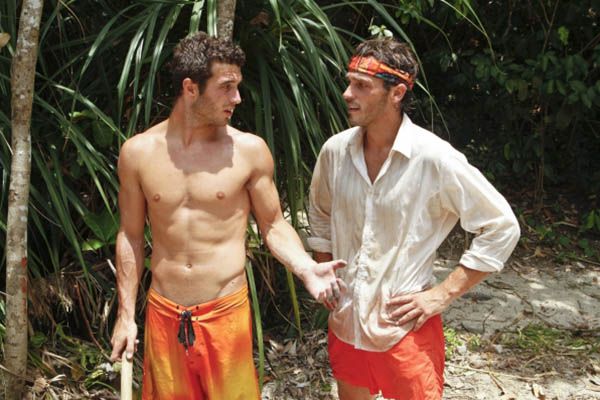 Sometimes on Twitter, someone will mention me and ask “Is that show [Survivor] still on?” I’d like to clear that up: No. Survivor was canceled in 2010, and these recaps are an exercise that other bloggers and I write in a vast imagination-pooling experiment. What happens is that we all race to our computers on Wednesday nights and then we sit and concentrate extremely hard while visualizing our synapses melting together across state lines and continental divides like tentacles of oozing chocolate. Miraculously, we’re able to achieve a sort of synchronicity, and we almost always agree on fabricating the same characters and sequence of events. Occasionally, one of us explodes. Luckily, we’re each paid a stipend of $500,000 a year by a forum of scientists who plan to implant revolutionary devices in our heads to test mind-control techniques. I’m glad you asked. The burden of this secret has been too heavy to bear for so long. I feel free! Free! Free as Matt’s beard whipping in the hurricane winds! Liberated as a Cochran living every night as though it’s Survivor night! I’m so glad I invented him. To whichever blogger invented Phillip Sheppard, though: You are one sick puppy, and I salute you.

ANYWAYYYYYS, we open on some typical post-tribal unrest over at Gota Beach, where the fans are uncomfortably sitting through a tirade, courtesy of Shamar. Popular Alliance member Allie was voted off last week, which was just what Shamar and company wanted, but he’s still stuck on feeling like the odd man out and has his buff in a knot over being ridiculed by Eddie and Reynold. He turns his wrath on Eddie first, who defends himself with a lot of air quotes, but because Eddie is friends with Shamar’s nemesis, Reynold (Shamar called him Reynold’s “ace boon coon,” which seems pretty bleepable but was left sans bleep), he’s going to get an earful by association. Laura confesses to the camera that “the part of Shamar that was fun has completely gone” as Shamar lets loose on everyone, including poor Longbeard (who was a swing vote and really doesn’t deserve that kind of ire) and Forgotten Julia, who gets less airtime than the ghost crabs.

The next morning, Eddie and Reynold get together to talk about the “Revenge of the Nerds” alliance threat, now that their numbers have dwindled. They’re hoping that Shamar’s temper will wear on the rest of his alliance, but luckily for Shamar, he’s got Sherri coaching him to pull back on the crazy reins a little bit and “let it roll.” Sherri is a Shamar whisperer because she deals with “snotty teenage brats” all the time professionally. She’s his Svengali, and she’s good. Shamar is losing his will to continue in the game as the “black sheep,” claiming that Survivor is “not his kind of lifestyle.” And I get that. It’s becoming way too easy to imagine a little gray rain cloud hovering over Shamar in his confessionals, and he’s worried about appearing like the “angry black man.” His happiness, he surmises, is not worth a million dollars. He tells the rest of the tribe that that happiness is of paramount importance to him because he just got back from Iraq and had a hard time adjusting to civilian life after his return, and he’s got a good point. His catty co-islanders have put him in an “anger realm,” which of course leads Laura and Sherri to plead with him not to quit. It’s not just that they feel sorry for him (although I’m sure that’s part of it), but that if he leaves the game and they lose the challenge, they’ll be down two teammates at the merge.

Shamar eventually agrees to stay and “fight,” but Reynold takes a minute with the camera operator to paint Shamar as an ingrate who “made himself into a hero for unquitting.” These two straight-up loathe each other, and for that reason, I hope they both stick around for a long time. Just so long as it doesn’t send Shamar back into “that dark place,” because at this point I actually feel for him, and since we already know Lil’ Hantz is likely going to suffer a breakdown at some point, I don’t want to see things get too depressing. Just interesting. More yelling, less crying. It’s a game, after all.

At this point, the favorites’ camp at Bikal has just become a sort of variety show. Everyone is curled up in the fetal position on the sand, while Cochran, sweaty and haggard, enjoys giving the ladies (it’s a “Freudian picnic”) his creep-eye from behind the frames of his spectacles. Special Agent Phillip Sheppard wears a basket hat and talks about basketball, cringingly describing his signature move as “do a little double-dribble [grunt, grunt] … one step back, all air, baby!” All net. The fact that I, a person who literally got eczema from playing junior varsity basketball in junior high, know this and Sheppard does not should be a fucking felony.

Corinne teams up with Malcolm because he’s hot and she has no other buddy, and together they find the immunity idol when Malcolm pulls it out of a fetid-looking pool of water in the crevice of a tree trunk. Unfortunately, Corinne isn’t subtle enough about her niche alliance with Malcolm, and Andrea gets suspicious. Andrea flirtily approaches Cochran and pits him against Corinne before campaigning to Sheppard and Lil’ Hantz. Everyone seems down but paranoid Brandon, who publicly agrees but privately — and strangely — uses this as an excuse to rant about how he’s “been done like this before” and wants to take a leak in the food supply and burn the shelter “to the ground.” Huh? Now I’m just picturing Lil’ Hantz staring at the pee-soaked beans after two days of no sustenance, shaking his head, and digging in. Did he sneak in some ramen? Does he run on adrenaline and sand? I don’t get it.

Another combination reward and immunity challenge follows. (Boo! This is cheating!) The contestants must all race into the ocean to a bamboo cage. Once everyone’s there, they can dive over the cage back into the water to retrieve a heavy chest, untying it and dragging it back to shore. Then — stay with me, people — they lug the chest to a track, where they have to use a grappling ring to snag three more sections of the track before sliding the chest to the finish line. The reward is comfort (blankets, pillows, chairs and a tarp) and a chance to skip the date with Probst at tribal council. Laura’s crappy swimming puts the fans at an immediate disadvantage, but they catch up to the favorites and it’s a tight match from there on out. There’s a brief kerfuffle when Shamar can’t get anybody to give him a pair of goggles to protect his contact-lensed eyes. It’s neck-and-neck when the two teams are back at shore, with Malcolm and Reynold tossing their hooks first. Reynold grabs the first hook, but Phillip takes over for Malcolm and snags one for the favorites. Eddie misses the second hook, while Malcolm, up again, scores. Shamar gets one for the fans, but in a final showdown between Eddie and Lil’ Hantz, Eddie’s just too slow. The favorites win, so Corinne now has enough time to do damage control before they find themselves at tribal again. If she’s smart, she’ll double-cross Andrea while cloaked in a cozy blanket on Bikal Beach.

Tender Shamar is understandably pissed that he was denied his precious goggles, and decides to blame Reynold. “Don’t talk to me,” he says. “You disgust me.” Reynold informs the camera that Shamar is “less mature than my nephew Grayson, and my nephew is 3.” Wow, way to make Grayson feel less than. Way to call him out by name. Laura worries to Matt that she’s on the block because of her lame aquatics, but as long as the Nerd Alliance sticks together, she’s in the clear. Laura pegs Hope as the next to go because Eddie and Reynold have the physical strength to win challenges. But because Reynold’s got the idol, they decide to split the vote between Eddie and Hope. Sherri gets Shamar in on it, but Shamar’s so emo and desperate to connect that he “gives [Hope] a hint” that she can save herself if she votes for Eddie — which is so stupid, but he’s receptive to anyone who confides in him that they’re afraid they’re going home. Like I said: tender, tender, tender broken man. Like a big filet mignon cooked medium rare and served under a bleak umbrella of troubles. Hope tells Forgotten Julia about this breach of trust, and Forgotten Julia passes this intel right down the line to Sherri and Matt, which makes everybody nervous that Shamar is going rogue. Laura floats a proposal in Reynold’s direction that they bring Julia on board to send Shamar packing, and Reynold gets way excited, saying that doing so would be “like Christmas.” It’s a big risk, but Laura’s just covering her bases. She’s playing defense. She’s tossing air balls. She’s starring in Air Bud. You read ESPN. I get you!

At tribal council, Rey and Shamar butt heads over how far a kilometer is and how loud you have to yell to be heard from that distance. Jeff comments that Shamar is “once again in the hot seat” for throwing tantrums, but Shamar says that he’s just a scapegoat and calls Reynold a liar. A pile-up ensues, with Matt opining that Shamar “gets aggravated really easily” and Forgotten Julia “reliving the trauma” of being shouted at by this unpopular lug. Sherri defends him, claiming to have “met a lot of Shamars” and saying that he’s just the sort of person who never forgives anyone for anything. Probst asks Hope if she’s concerned about getting voted out and questions Eddie for being a threat because he’s “too charming and too fit.” They’re both worried, but they redirect the finger in Shamar’s direction. Eddie and Reynold are, apparently, not allowed to speak to Shamar anymore. Bossy bossy. There’s a “no-talking list,” and Eddie has earned his place on it for being “a follower to the real person [Shamar] doesn’t like.” That person — Reynold — intends to keep poker-facing his way through fake-outs with the idol, but as voting commences, it doesn’t show its little wood-whittled face this time. Amazingly, there’s a three-way tie, with three votes each for Eddie, Hope and Shamar. Unfortunately, there isn’t a fire-building competition (I love them! I do!), but a re-vote, and this time, Hope’s torch is snuffed.

Hope’s exit interview was so boring that I’m not even going to cover it. Instead, at this point in the game, I think Sherri’s becoming an interesting figure, and I’m curious to see how she’s going to develop. Her strategy — mostly staying out of the way, doing her dirty work one-on-one, and performing some pretty deep psychological analyses of her opponents — is super-smart. Next week should be interesting because she engages in a yelling match with Eddie during which her voice becomes warped through a demon-anger amplifier as she screams “YES, I SAID THAT! YES, I SAID THAT!” I assume this is in response to another outburst of Eddie air quotes. If the fans lose again next week, Reynold and Eddie might be forced to play that idol — then again, because they’re the two biggest physical threats, maybe the bell will toll for the favorites, and we’ll get to see a Very Special Ops tribal council. Yes, please. We have absolutely not seen enough of Tribal Council Sheppard this season. I’m also impressed by the glimpses of Andrea’s manipulative talents we saw this week, and I’m hoping that she and Lil’ Hantz have an epic battle. This much we know for sure: A hurricane is coming, and so are the evilest-looking rats I’ve ever seen that crawl over the faces of the castaways while they sleep. Sweet dreams!